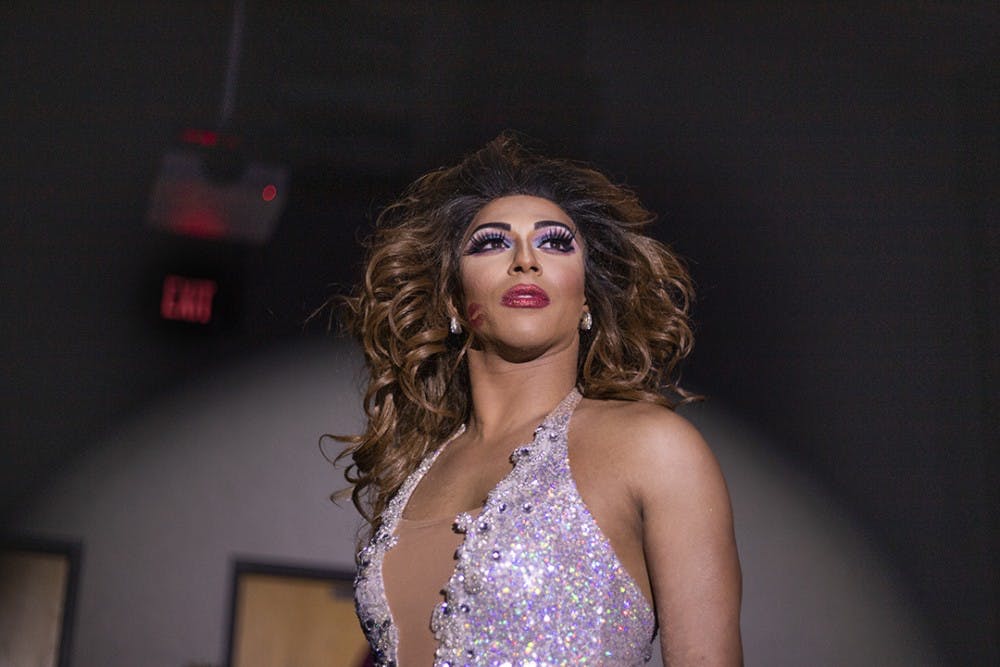 A ballroom overflowed with USC students as many rushed to grab seats closest to the stage.

Those lucky enough to snag chairs aimed for aisle seats, while those who wandered in minutes before showtime occupied standing corners of the room.

By the end of the night, that same Russell House Ballroom stage was a sea of dollar bills and feathers.

Birdcage is USC's annual drag show that showcases the talent of local drag queens and occasionally hosts competitors from RuPaul’s Drag Race. The show was created by Individuals Respecting Identities and Sexualities (IRIS) and is hosted in conjunction with Carolina Productions.

According to DeStefano, the history of drag is embedded in the ball culture of New York City, where many transgender people of color considered these balls sanctuaries and used them as a way to express themselves.

Since then, drag has become mainstream with the help of the reality competition TV show "RuPaul’s Drag Race." On the show, drag queens from far and wide compete to become America’s next drag superstar by participating in weekly challenges where they are critiqued in front of a panel of judges.

Ezri Fender, the special events coordinator for Carolina Productions, said that Birdcage allows students to experience another culture they probably wouldn't have a chance to otherwise.

"It raises an awareness of a culture maybe they're not completely aware of," Fender said. "A lot of drag shows, they're usually late at night or sometimes they're in bars where younger students cannot go in, so it's really great to bring that culture to them in a campus environment."

While last year's show featured performances from local South Carolina queens, DeStefano and Fender made it their goal to secure a queen from "Drag Race" as well.

Although this year wasn’t the first Birdcage to boast a Drag Race alumna, both Fender and DeStefano agreed they booked this headliner at the perfect time.

"Drag Race" favorite, Shangela, signed her contract to perform at Birdcage the first day of this semester.

In addition to her endless supply of catchphrases and memes, fans of the show also remember the queen for her inspiring "Drag Race" journey that spanned three seasons.

“I have always loved entertainment, and growing up as a young, black, gay kid in a very small town," Shangela said. "I was always looking for outlets to express myself and enjoy myself and being an entertainer.”

After her elimination, RuPaul invited her back for season three. She fared much better, but still didn’t grab the crown.

In 2018, Shangela was brought back a third time for the third season of "RuPaul’s Drag Race: All Stars," where she was tough competition for the other queens and made it to the top three.

Shangela was eliminated in the season finale, despite having a better track record than the other queens in the top three, which drew controversy. In a shocking twist, RuPaul let previously eliminated queens of the season determine the top two, and Shangela didn't make the cut.

However, she hasn’t let that keep her down. Since her time on "All Stars 3," Shangela embarked on a record-breaking 184-city tour and made a cameo in the Oscar-winning film “A Star is Born." She recently performed a Beyoncé medley at the GLAAD Media Awards — which honors media for accurate and inclusive representation of the LGBTQ+ community — and received a standing ovation from Queen Bey herself.

"I am so proud to be able to be here as a champion of living out your best life in your most truest form, and that's what I hope to represent to not only my fans, but people who don't even know who I am," Shangela said. "I think the more that we can stand up and be proud and the more that we have allies ... it makes people feel more comfortable in being their best selves."

After meeting fans and signing autographs at her meet-and-greet, Shangela went backstage to greet the eight local queens before the show.

Clouds of hairspray filled the air and make-up palettes scattered the tables in the dressing rooms as the local queens worked diligently to perfect their signature looks for the show.

“This is the reality of drag,” said returning queen Ebony Wood, as she stood up to don her tights and apply her wig.

While some queens like Wood are inspired by campy legends such as Divine, other queens like Anaya Devore and Veronica La Blank draw inspiration from Tyra Banks and other ‘90s supermodels.

Still, for the queens, there’s much more that goes into becoming a performer besides flashy garments and heavy makeup.

“It's a combination of being a makeup artist, a dancer, for some people a seamstress, a costume designer, performer, a music engineer, a comedian, a businessperson," Wood said.

“You have to have a vision,” La Blank said.

During the show, the queens lip-synced to disco stars like Donna Summer and modern pop divas like Ariana Grande, occasionally stopping mid-performance to pick up tips from audience members.

In addition to performances from drag queens, the show featured a local drag king as well.

USC alumna Oliver Clothessoff has been doing drag for 10 years and his style of drag applies comedic twists to popular fantasy characters. This year, he performed a medley of songs inspired by King Joffrey from Game of Thrones.

Like many of the performers, Clothessoff emphasizes the importance of Birdcage to the LGBTQ+ community at USC.

“I was in a sorority at USC, and it was at a time when gay wasn't really OK," Clothessoff said. "The first year that I came and performed, I had some of my sorority sisters there, and it was amazing to see how far people had come in just such a short amount of time.”

Birdcage closed with a showstopper from Shangela — she performed the Beyoncé medley she'd debuted a few weeks earlier.

It wasn't hard to feel the camaraderie among audience members, and the room resembled something close to a family by the end of the show.

“I'm really, really happy that I've been invited to be a part of this event for the last nine years, and just see what acceptance has become here, because it wasn't this when I was in school," Clothessoff said.