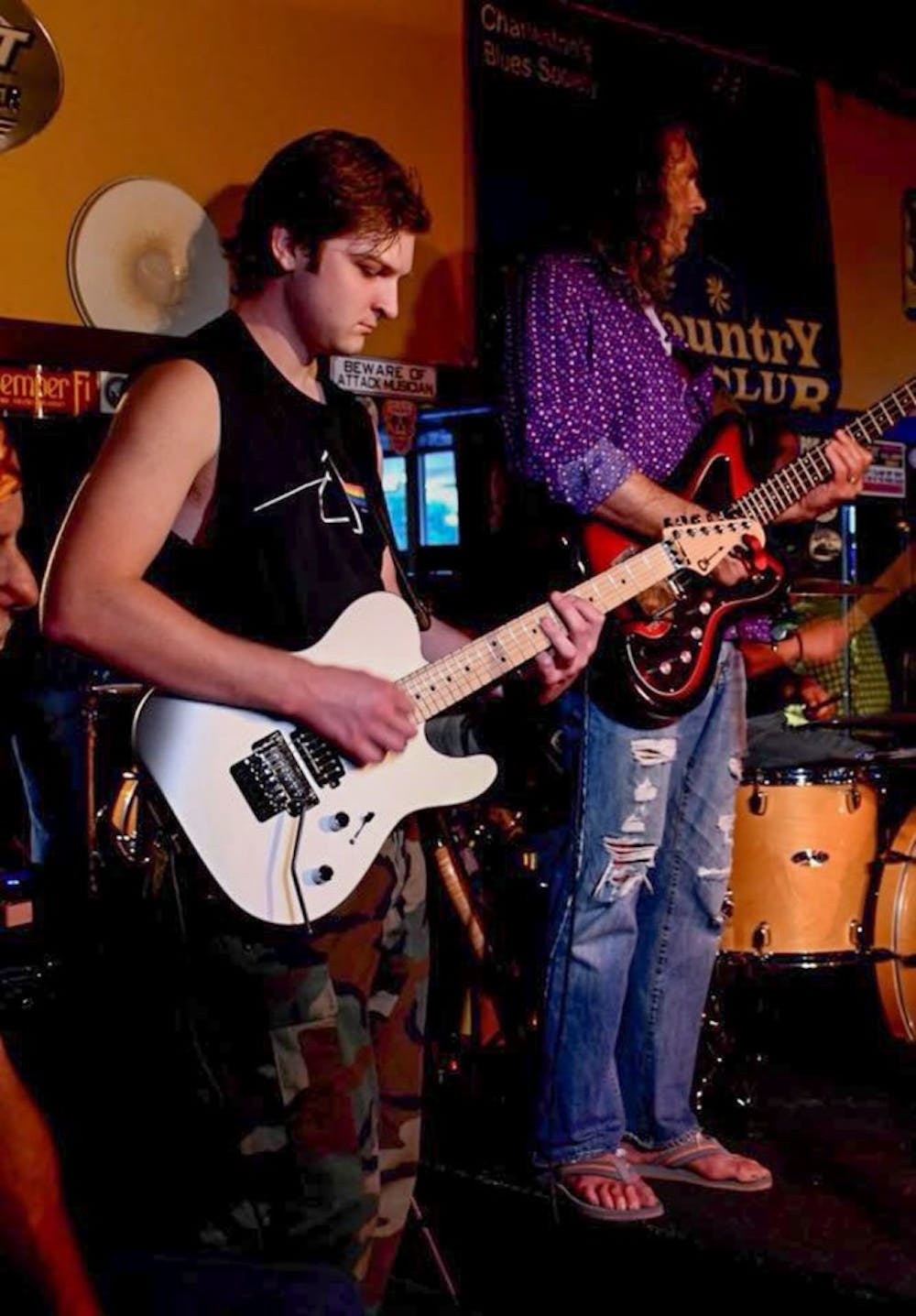 To Benjamin Shumate, there’s no such thing as Tuesday. To him, the third day of the week is known exclusively as “Blues Day.”

Every Tuesday night, Ben packs his music equipment into the backseat of his Ford Crown Vic and drives to Lexington to The Bluz Shak, a single-story wooden structure with a back porch and bright blue Christmas lights that stay up all year long.

By 7 p.m., when Shumate arrived on a recent Tuesday, the thump of bass and the occasional wail of an electric guitar can be heard from the street.

The Charleston native and fourth-year anthropology student swings open the screen door and is immediately greeted by the many patrons inside. Most are over 50, and every one of them knows him by name.

“Hey, Ben,” someone shouts from the hallway. “How’s the finger?”

Several weeks before, Shumate had left a ground surveying project to the last minute and in a rush to complete it, smashed his finger between two pieces of heavy equipment. Though the injury left him with a throbbing hand and a metal splint that made playing the guitar a challenge, it didn’t stop him from showing up to The Bluz Shak later that night.

There’s a collective burst of laughter from the patrons crowding every corridor of this home-turned-music hall as Shumate flashes a smile and flips them the bird in response, showing off a now loosely bandaged and mostly healed middle finger.

Despite the loud music and general chaos, Shumate is comfortable — a stark contrast to how he felt during his first Blues Day almost two years ago.

“Oh, man,” Shumate said, remembering when he pulled up to The Bluz Shak for the first time. “I had no clue what I was getting myself into. I was so intimidated. How would you feel if you heard guitar riffs like that, before you even got in the building?”

He jabs a thumb over his shoulder, motioning to Rick Marsh, a veteran musician and founder of The Bluz Shak. Marsh is leading a sprawling rendition of Creedence Clearwater Revival’s “Suzie Q” that has onlookers hollering with approval.

He remembers Shumate’s first night, too.

“This shaggy haired young guy showed up on our doorstep out of nowhere and I didn’t know what to think,” Marsh said. “But then I saw his guitar case and had a good laugh, and I knew he’d fit right in.”

BS, Shumate’s initials, are painted in white on his guitar case. Marsh teased him and asked why The Bluz Shak’s initials were painted on his equipment, then clapped him on the back and welcomed him in.

Shumate has spent almost every Tuesday night since then playing alongside Marsh and other The Bluz Shak regulars. Todd Smith is one of the many longtime performers who has gotten to know Shumate by performing with him during the past year and a half.

“I’ve been doing this a long time. I met Ben and thought, ‘He’s quiet now, but not for long,’” Smith said. “Sure enough, I was right. The kid can play.”

Shumate has come a long way since his two years of guitar lessons in high school, and prefers to spend his free time practicing with his hand-me-down Fender than finishing the senior thesis required for graduation.

“I’d always liked blues music, but honestly, I started taking lessons to impress a girl,” Shumate said. “At the end of the day, I liked the guitar more than I liked the girl.”

When Shumate moved to Columbia to attend USC, he said he was disappointed when he couldn’t find a venue in town that welcomed blues musicians. It took two years of searching for him to discover The Bluz Shak.

Logan Perkins, Shumate’s roommate since freshman year and an avid drummer, said they received multiple noise complaints when they lived in a dorm because there was nowhere else for them to play. He said The Bluz Shak has helped both of them grow as musicians.

“Ben is able to put things together that I never would have thought of, and I think a huge part of that is thanks to the folks at The Bluz Shak; what they’ve been able to teach us,” Perkins said.

Shumate said his whole week revolves around Blues Day because it’s a chance to show off what he’s learned and to learn even more while doing it.

“The community of blues musicians around here is pretty small, and odds are, most of them can be found at the Shak any given Tuesday night,” Shumate said.

As long as The Bluz Shak’s blue lights stay on, Shumate can be found there, too.

“My inspiration used to be musicians like Stevie Ray Vaughan, but now it’s Rick Marsh and the guys at The Bluz Shak,” Shumate said. “I become a better guitar player every time I show up.”