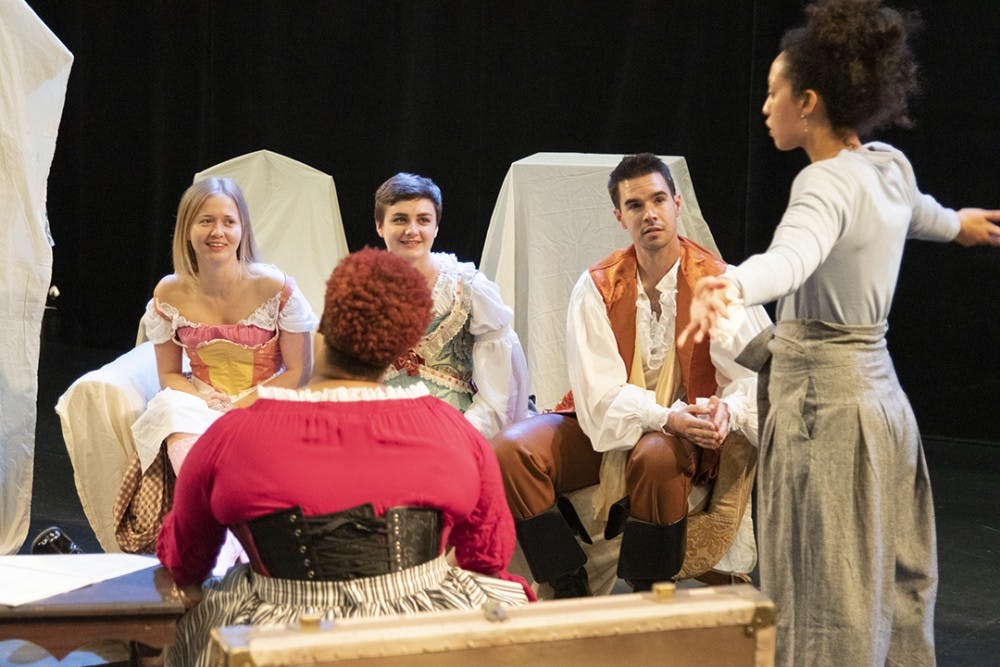 The world premiere of “Aphra Behn: Wanton. Wit. Woman.,” presented by USC’s Department of Theatre and Dance and Full Circle Productions, highlights the story of a woman whose contributions as a playwright are rarely recognized.

Aphra Behn was a prominent 17th-century English playwright, yet director Lindsay Rae Taylor said her name is often skimmed over in history books.

“If you open up a theater’s history book and you look up Aphra Behn, there’s probably three sentences about her, and she was pretty much the first female playwright and the first woman to ever get paid for writing,” said Taylor, a third-year MFA directing student.

Taylor said the crew has been workshopping the production ever since receiving a grant from Harbison Theatre’s incubator program last spring. She said the theatre expressed an interest in having the show be a feminist-driven piece, touching on the Me Too and Time's Up movements against sexual harassment.

Playwright Mariah Hale refers to the play as a femme adventure, Taylor said, because it’s a modern approach to Aphra Behn’s story. The goal of the play is to not feel like a stuffy museum piece.

“I think Mariah, from a feminist standpoint, really wanted to showcase this woman who sort of did whatever she wanted,” Taylor said. “She wasn’t into pleasing other people; she was into pleasing herself.”

Since little is known about Behn, Taylor said Hale did extensive research on the time period and Behn to create a historical portrayal of what occurred during her life. They wanted to make sure the play was not simply a linear storyline but included details that made Behn dynamic.

Behn's story is an example of what it was like to be a woman during that time, said Leslie Valdez, first-year MFA student and lead of the play. Valdez said she was surprised when she was cast for the role of Aphra Behn because their personalities are so different.

“As a woman, we think very similarly, but she’s such a bold character that it really, it takes a lot of my energy to sort of portray her,” Valdez said.

Valdez said the costume itself gives her a sudden energy while playing the role. Along with being the playwright, Hale is a costume designer. The costumes in the play parallel styles from the 1660s and 1960s to create a combination of old and new.

Susan Swavely, a second-year English and theatre student, said that working on a play from scratch is a process unlike anything she’s done before, because everyone involved is able to give their input and ideas, so the collaboration between the actors and playwright is different than in an established production.

“We have the privilege of speaking to the playwright directly, which obviously when you do a Shakespeare show, there’s no way to contact the playwright,” Swavely said.

Taylor said the process is unique because rewrites happen in the room, characters are cut and brought in and storylines are rearranged. It takes flexibility from everyone involved — the actors, the director and the playwright.

“The actors are doing a really wonderful job of rolling with it, taking risks, being bold, not being afraid of it — which we’ve embraced the challenge of rolling with the punches,” Taylor said.

Valdez said it’s difficult to know how the audience is going to react to the show since it has never been shown before.

“That’s the great thing about new pieces: you never know what the audience is going to get, because everyone sees the world in a different way,” Valdez said.

Despite being hundreds of years apart, Swavely said there is a parallel between Behn in the 1600s and the role of women today. Behn was adamant about women’s rights, pay equality and representation.

“Aphra Behn was one of the original women to really stand up and take power for herself.” Swavely said. “Today I think that’s super, super prominent. I mean we’re calling for more female directors and more movies and films and plays with women at the head of them.”

“Aphra Behn: Wanton. Wit. Woman.” will be performed at 8 p.m. from April 21 to 28 at the Center for Performance Experiment on Devine Street.