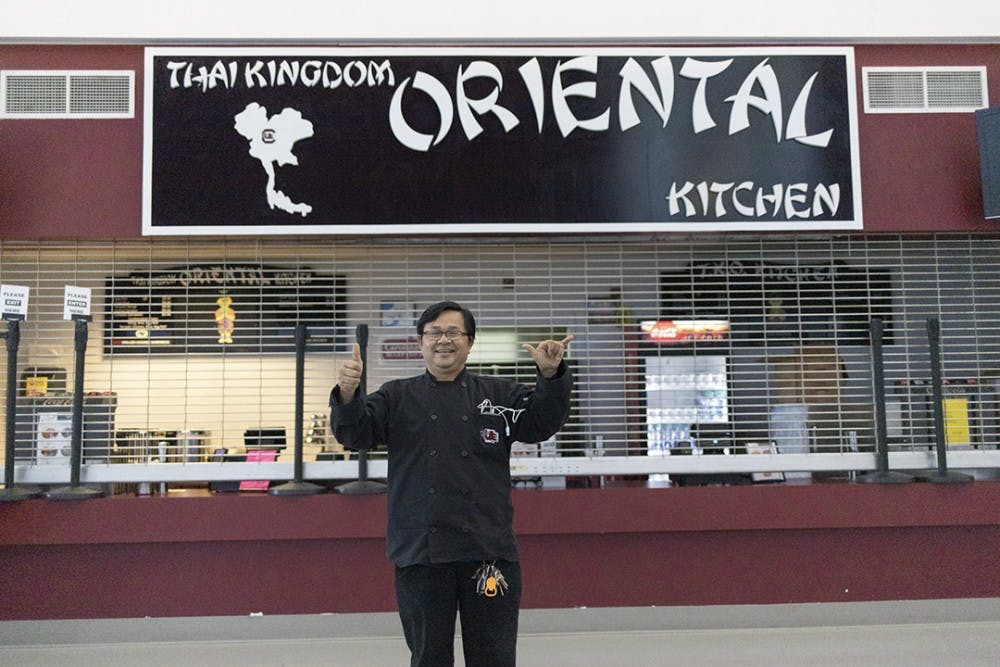 When fans visit the concession stands at Williams-Brice Stadium, Colonial Life Arena or Founders Park, they will mostly see the standard American fare that one could find at any arena or stadium in the country.

However, if you look past the typical selection of hot dogs, hamburgers and pizza, there is one unique venue that might be unexpected at a sports venue — a Thai restaurant.

Located next to section 105 in Colonial Life Arena, Sam Srisuwan runs Thai Kingdom Oriental Kitchen, and has been serving fans Thai dishes during games and concerts in the venue. He also serves at Williams-Brice Stadium and Founders Park.

In 2002, after closing the first Thai restaurant in Columbia, South Carolina, Srisuwan, a self-proclaimed Gamecock fan, wanted to open a food vendor on campus for the school’s athletic events, combining his degree from the school and his passion for South Carolina athletics.

Srisuwan experienced some resistance at first, since traditionally, it would be difficult to find Thai cuisine at athletic events.

“First they said no because the baseball,” Srisuwan said. "You have hamburger, hot dog — they said no Chinese.”

However, Srisuwan was still given a chance to show that a Thai restaurant could be successful at venues that are dominated by American cuisine.

He ended up proving himself right. Seventeen years later, he's still at South Carolina athletic events and is a fan favorite in more ways than one.

Srisuwan’s restaurant is not only unique because his food is not American cuisine, but also because of his loyalty to the South Carolina teams that compete in the same building.

Srisuwan, originally from Thailand, moved to Columbia to attend the University of South Carolina. In 1985, he graduated from the College of Hospitality, Retail and Sport Management.

Ever since then, he has been passionate about the University of South Carolina, and has had family members also graduate from the school.

“I love Gamecock,” Srisuwan said. “I graduated from Gamecock. My son a Gamecock. He graduated 2009.”

Other than his food, Srisuwan is known for his unwavering support for the school’s athletic teams and the student-athletes.

“I love the teams,” Srisuwan said. “I have passion for them, and they are so good to me. I know each one of them.”

What makes Srisuwan’s fandom unique is always having words of encouragement for the players and teams, regardless of the game outcome.

A scroll through Twitter after any Gamecock loss will reveal plenty of fans who are critical of the team, players and coaches, specifically in sports that attract the largest crowds like football and basketball.

However, Srisuwan does not agree with that mindset. Before deciding to step back from Twitter, he used the restaurant’s Twitter account, @TKOriental, to show his support.

He finds it important, even after deciding to not use Twitter as much, to not belittle student-athletes after a loss. Srisuwan believes that even if the team is losing, they are young athletes who still deserve praise.

“You talk bad to the teams that try so hard — why do that?” Srisuwan said. “That’s the point that I want to show everybody. Always, if they are down, put them up. Don’t step on them. Don’t walk over them.”

But whether it is serving food or supporting student-athletes, Srisuwan believes in the importance of people and giving good service to others.

“Fans and people who love you, they will support you. No matter what is is,” Srisuwan said. “Our service, personality and food — that counts for everything.”