'Where are the women?' Students, faculty protest all-male presidential finalists 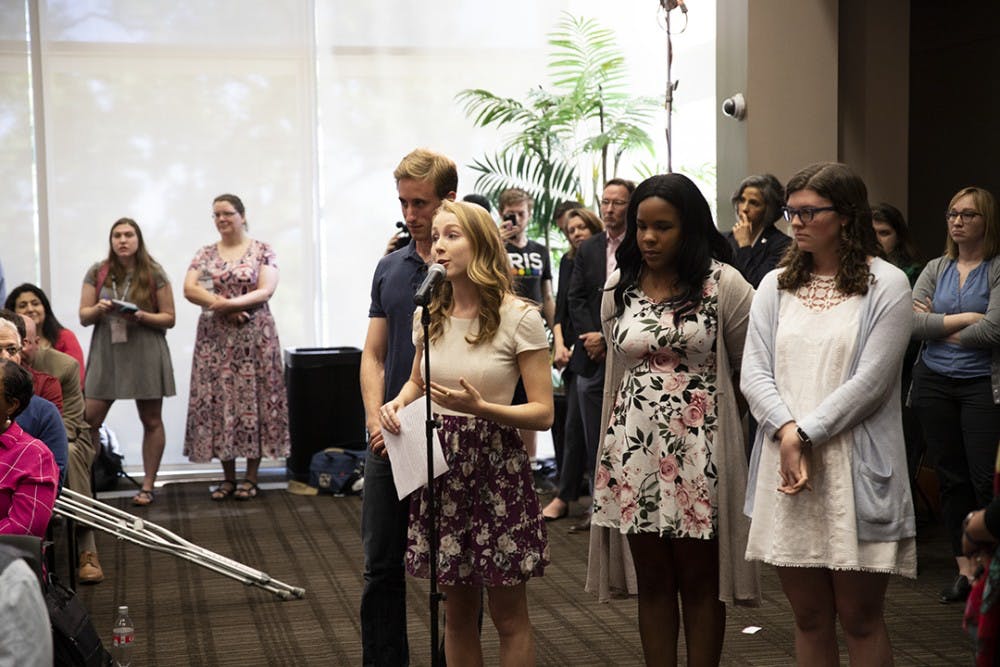 Over 30 student organizations and 68 faculty members signed the letter, which criticized the presidential search committee's determination of a finalist pool with four men and no women.

“We are not attacking the qualifications of these candidates; we are criticizing the process that led to their selection,” the open letter said, read by Megan Rigabar, a fourth-year global studies and Spanish student.

Protesters said they were concerned with a lack of diversity within the Board of Trustees, where 19 out of 22 members are white males.

Protesters also said the search committee fell short of finding a diverse group of candidates for USC’s next president, despite saying they were going to focus on that exact principle. The protesters met with university representatives Monday morning before reading the statement.

“I think it’s pretty clear that the university failed in its search to find and attract a diverse group of candidates,” Nate Duvall, a fourth-year economics student, said.

Emily Fisher said the group, in doing its research, found that seven universities nominated women for president in the last two months.

“It’s not that we were lacking women who can fill these roles,” said Fisher, a fourth-year English and psychology student. “We just haven’t found them.”

Not only were the final four candidates male, but the 11 semifinalists were also male, according to the open letter.

USC public relations director Jeff Stensland said the university and the search firm did all it could to expand the search to minorities and female candidates.

“The committee saw a pool of more than 80 individuals, diverse in terms of both underrepresented minorities and gender,” Stensland said. “While the pool did not result in a female finalist, each of these candidates has expressed a strong commitment to diversity and carrying out the diversity strategy recently approved by our Board of Trustees.”

If the finalists stand, the students say they hope the university picks the best candidate who cares the most about diversity and inclusion on campus.

“If we’re going to in the future someday have a woman president of the university," said Olivia Halvorson, a fourth-year international business student. "We need to hire somebody now who cares about elevating women and minority people at the university."

Community members can find information about the protest on Facebook. Student organizations and faculty members can fill out a Google Form to sign the petition, while individuals can sign a petition on change.com.

The number of faculty who have signed has increased to 125 as of April 26.