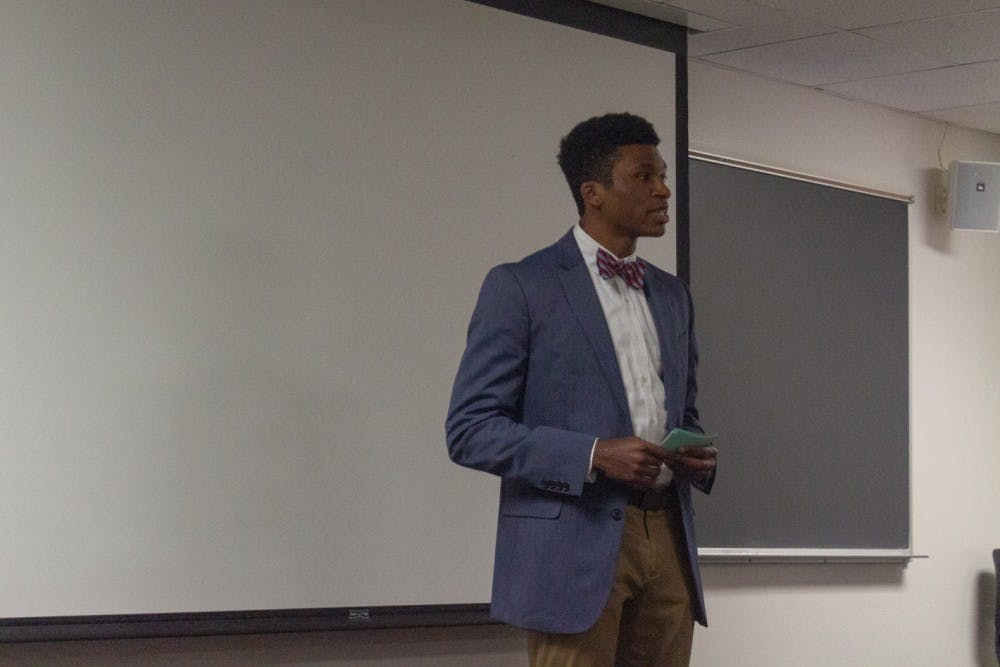 USC’s speech communication and rhetoric faculty chose six introductory speech students to speak at the university's first public speaking competition. In addition to a shot at a cash prize, finalists took the opportunity to inform an audience of their chosen topic.

The competition was Tuesday at the College of Engineering and Computing on Main Street and sponsored by the educational services company Cengage.

The first category was informative speech, and there were three competitors: KJ Mack, Molly Niermann and Catherine Everett.

Mack wanted to inform his audience about the debate on whether or not prescription opioids should continue to be administered as a long-term option to relieve chronic pain, he said.

“Both sides of this debate pose tough questions and present evidence that challenge us to look at the opioid crisis in different ways,” Mack said.

Mack also said the competition was a good opportunity to show the results of the work he's done in over the past couple of years and to hone his public speaking skills.

Shannon Cochran,  co-chair of the Public Speaking Competition Committee, talked about why she wanted introductory speech students to have an outlet to share their ideas.

“Some of my students gave these amazing speeches, and I would always lament the fact that the only 24 people that would ever see this really great speech were the same 24 kids who sat in the classroom every single time,” Cochran said.

“It was quite a learning experience, kind of different from just a lecture hall class about how you should give a speech," Liu said.

Liu decided to pursue the legalization of the kidney trade for her speech class after her roommate told her the story of her mother donating a kidney to a relative, she said.

“The difference is that if the trade is kept on the black market, then the trade is done with kidnapping, scamming and exploitation,” Liu said. “If the trade is legalized, it can be subject to government regulations and have better, safer environments.”

Cochran said her goal is to keep the competition going. She hopes it becomes common knowledge, she said, to where students in introductory speech classes will already know about it from past participants.

Jonathan Edwards,  an instructor and the director of the Speech Communication and Rhetoric program, said he was excited to offer students a new opportunity.

“As teachers ... we get to see all the work and the effort that goes into it," Edwards said, "and getting to offer students an opportunity to showcase that and giving us a chance to kind of honor those students, that's a really exciting thing."