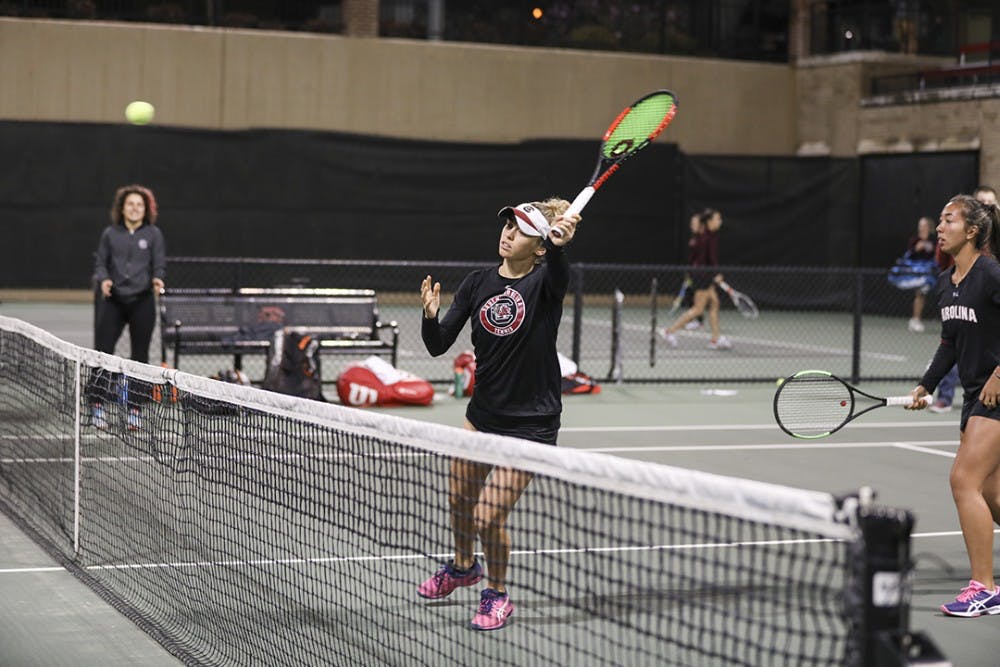 Though their sport is a somewhat individualized, the No. 5 South Carolina women’s tennis team spends a lot of time behind the scenes working with a strength and conditioning staff to keep players healthy throughout the season.

Most team sports require teams to have enough players on their rosters to make substitutions during a game, but collegiate tennis teams have limited rosters. A player would have to forfeit his or her match if faced with a severe injury, which is why maintaining physical strength is important.

Associate head coach Jeffrey Nevolo has worked with the women’s tennis team for five seasons and says that he has seen improvements since the team partnered with the exercise science department.

“As the season wears on, we’re getting daily reports from our training staff, from our strength and conditioning staff," Nevolo said. “Especially, with a sport like tennis, there’s a lot of soft tissue injuries, overuse injuries, so we’re generally going to be changing practices a little bit for each of them.”

Jay Patel, the director of sports science for the athletic department, said he believes today’s student-athletes need more individualized training instead of following a set template that may not help certain athletes improve their performance.

This season, the women’s tennis team also began their partnership with Alex Buchman, the assistant director of sports performance.

“Our No. 1 job is player safety,” Buchman said. “How can we get the most athleticism out of them as possible but also put them in the most risk-free environment?”

One of the main components that has helped the tennis players improve their performance is monitoring their heart rate, Nevolo said.

The coaching staff can determine whether a player is under moderate or heavy stress levels by observing the player’s baseline heart rate.

In addition to monitoring their heart rate, the team uses exercise bikes to reduce the wear and tear from running on the hard courts.

“These courts are very unforgiving. Hard courts are really tough on your joints, so we use those bikes as a way of still testing the heart, but trying to save their joints a little bit more,” Nevolo said.

The coaching staff, strength and conditioning team and the exercise science practitioners collaborate in effort to help the team maintain a healthy balance in every aspect of their lives.

“All we can do from our end, from the sports performance standpoint, is just hopefully getting them to understand that we’re there for them,” Buchman said. “Really to educate them on the importance of everything we’re trying to do and that’s not just in the weight room.”

South Carolina finished its regular season 17-3 with an SEC victory against the No. 26 Florida Gators. The Gamecocks will be heading into the SEC tournament with a 12-1 SEC record.

“I think when you have a really motivated group and you really want to see them get better, things like rankings take care of themselves,” Nevolo said.