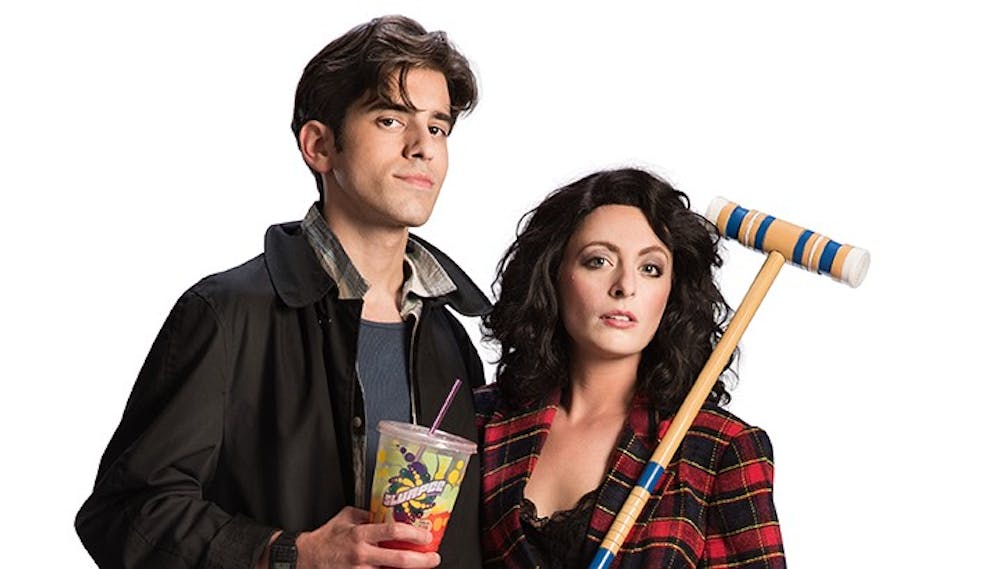 After two months of pushing the envelope at rehearsal, the cast and crew of Trustus Theatre’s “Heathers, The Musical” is ready to bring the dark humor of this retro production to a live audience.

Based on a 1988 film of the same name, "Heathers" was released in a time where vying for popularity, struggling to fit in and standing up to the bullies were among the most common Hollywood tropes. With lighthearted films like "The Breakfast Club," "Sixteen Candles" and "Revenge of the Nerds" packing a powerful message of what can happen when a ragtag band of misfits comes together, "Heathers" kicked that trope up a notch by adding just a dash of homicide.

“Heathers” follows lead character Veronica Sawyer as she tries to survive a high school ruled by cliques, namely the popular yet cruel Heathers. Veronica ultimately finds a place in the Heathers clique, but matters are complicated by the introduction of Veronica’s mysterious new love interest, the book-slinging and trench coat-wearing J.D., whose promise to make the world a better place proves lethal to Westerberg High.

A Trustus veteran of 26 years, director Dewey Scott-Wiley is no stranger to the culture of the time period, having attended college in the 1980s.

“I was familiar with the movie, and I was kind of surprised that Trustus was putting it in this season because it has a lot to do with, like, ‘let’s get back at the popular bullies at school by using extreme violence,’” Scott-Wiley said. “And so I was like, ‘hm, that’s an interesting choice right now given the school violence climate.’”

With heavy subjects touched upon in the show, including bullying, depression and school violence, the characters are notably complex.

“My character JD is essentially the charming yet dangerous antagonist, even if an unconventional one, as he seems to be on the side of the protagonist for much of the show,” Michael Hazin said in an email interview.

Indeed, the characters of “Heathers” don’t fall neatly into typical archetypes. As the story progresses, the apparent protagonists begin making questionable — and highly illegal — decisions whereas the Heathers are humanized and made three-dimensional. In this way, the characters experience a role reversal of sorts, and the spotlight of villainy shifts from the Heathers onto J.D.

While the characters' relationships may be in turmoil, the actors' are holding up quite well. Lead actress Katie Leitner, who plays Veronica, has worked with Scott-Wiley in several productions since 2009, and her on-stage love interest J.D. is portrayed by her real-life significant other.

“We get to fall in love, fight, make up, ...and fight again every night," Leitner said in an email interview. "What's more fun than that? It's a perfect recipe for a fun rehearsal process and a great show.”

Although the show does delve into some dark territory, it is ultimately a comedy. The topics work surprisingly well in musical format, Scott-Wiley said, and fans of the movie will enjoy the show's twist on classic scenes.

"There's some funny lines in the original movie that they end up making an entire song out of, like 'my dead gay son,'" Scott-Wiley said. "It's a great, festive musical theater number, so I'm looking forward to seeing people who like the movie be surprised at all the fun stuff in the musical."

In the end, "Heathers" has just as powerful a message as any 1980s coming-of-age flick. Audiences will be able to laugh at the dark humor and over-the-top scenes, but underneath it all lies a very universal message: Everybody wants to fit in, and everybody has their own struggles. Be kind.

What's more, Scott-Wiley hopes the show will inspire conversation among its audience about these violent acts that are happening in schools today and how we could possibly change that.

"In 1989, we thought, 'what a darkly funny, ridiculous, absurd, that-would-never-happen kind of thing,'" Scott-Wiley said, "and now, not so absurd and ridiculous."

"Heathers, The Musical" will be performed on select dates from June 28 through July 27.