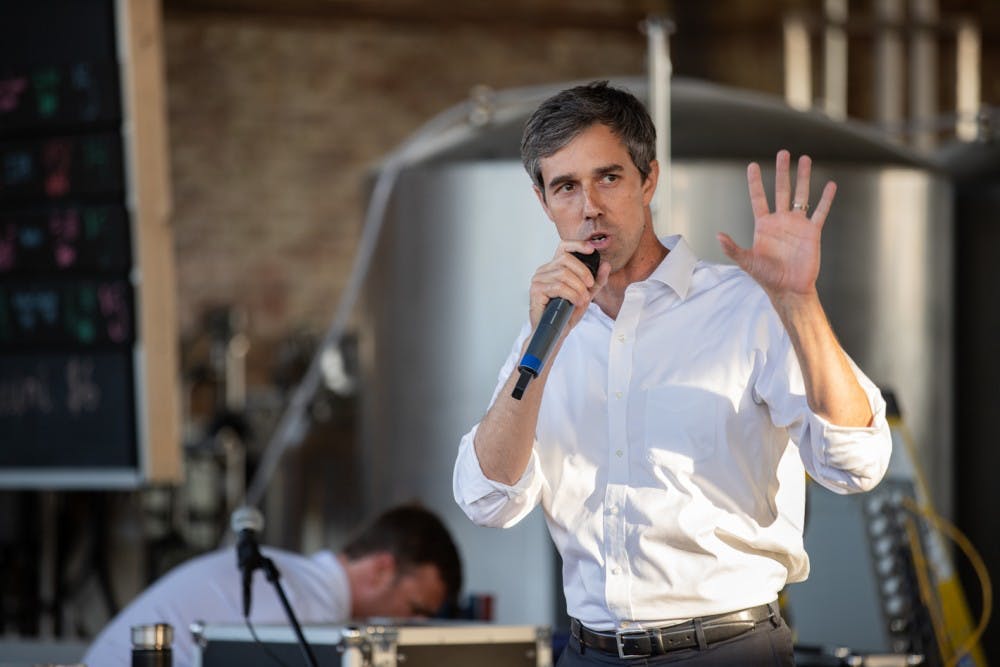 In his third visit to Columbia since launching his campaign in March, O'Rourke's latest stop in the city was part of a three-day campaign tour in the Palmetto State that went through Charleston, Sumter and Greenville.

"My thanks for the weather. I understand it's a bit cooler than it normally is. So, a very warm welcome from you personally but not so warm that it's uncomfortable outside. Beautiful, beautiful community, and we are grateful to be back," O’Rourke said.

The presidential candidate was introduced by Allison Terracio, a Richland County Councilwoman before a short campaign speech and a town hall debate where the candidate engaged with citizens.

Wilson told spectators that O'Rourke "is someone who ran the largest grassroots campaign in the state of Texas, visiting all 254 Texas counties ... [and] not taking any big money." Wilson was referring to O'Rourke's recent U.S. senate campaign in Texas, where he was narrowly defeated by incumbent Ted Cruz in the 2018 midterm elections.

His newly launched presidential campaign is focused behind a message of national unity and forward-thinking ideas to resonate with millennials. In Columbia, O'Rourke called for attendees to come together as Americans instead of separating themselves among political parties.

Johnny Lynch, a 24-year-old who recently graduated with a master's degree in education from USC, said he thinks O'Rourke is trying to appeal to millennials.

"He looks like a lot of us, he's a young guy," Lynch said. "So I think his big push is trying to get the younger vote."

Nina Grey, a retired 77-year-old minister who volunteers with the American Civil Liberties Union, had the opportunity to ask O'Rourke about the country's prison system.

“I want to know if, as president, you do commit to reducing the federal prison population by 50% during your presidency?" Grey asked.

"I'll give you the short answer up front: Yes. And then the longer explanation," O'Rourke said. He explained that his policy boils down to understanding the cause of the high prison population by dismantling some of its causes, such as the war on drugs and improving teacher representation.

The answer meant a lot to Grey, who said that discrimination against people of color and the mass incarceration system was an important issue to her in the upcoming election.

"I have a granddaughter who lives in New York City and she has a lot of student debt,” Grey said. “And I realize how crippling that can be to the success and progress of kids and families.”

In an interview with The Daily Gamecock, O'Rourke unveiled his platform to combat the college debt crisis and how his plans could potentially benefit college students in the future, particularly USC students.

The presidential candidate said he wanted to make college education universally affordable and that there are ways his staff would address accessibility, affordability and "focusing on what's next in your life" after completing school. Additionally, debt could be cancelled altogether if a student is willing to commit to public service in the future.

"If you're willing to dedicate some part of your life to public service [then] we wipe clean that debt," O’Rourke said.

Finally, he would propose to bring down existing interest rates for other former students still paying off loans.

A policy that Gamble is especially in favor of is expanding background checks and banning assault weapons.

"I'm a former March For Our Lives organizer; that's really near and dear to my heart," Gamble said.

Russell Jones, a 49-year-old Columbia resident, thinks O'Rourke's policies would benefit South Carolina, as a progressive candidate would prioritize health care and education, areas in which the Palmetto State often lags behind the rest of the nation.

Jones said he believes most democratic candidates have similar ideas, but retains a healthy skepticism of what an elected candidate would achieve in office.

"What I'm looking for is someone who can take us past the rhetoric and take us into the getting things done," Jones said.