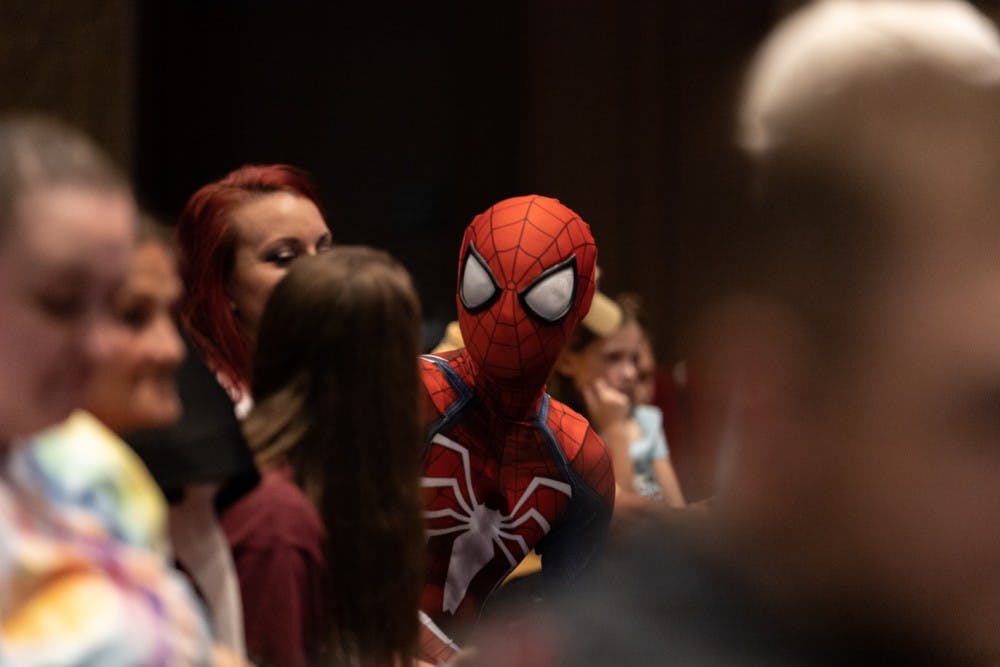 As the summer comes to a close, Soda City Comic Con is celebrating its fifth anniversary with cosplay, comic books, cartoonists and ... a Spider-Man proposal?

One of the things founder and managing partner Donald Brock Jr. said he's most excited for this year is the "Batman: The Animated Series" cast reunion.

"It's just fantastic, the cast is fantastic," Brock said. "It features Kevin Conroy who has been the voice of Batman. He's been the most stable Batman actor since Batman became Batman."

Conroy, along with three "Batman" co-stars, held a roundtable discussion Saturday reliving the '90s and the animated show.

Other notable guests include Michael Rooker of "Guardians of the Galaxy" and "The Walking Dead" and Kathy Najimy from "Hocus Pocus" and "King of the Hill."

The event also has various vendors, a retro video game room and its annual cosplay contest. During the contest this year, the last contestant, dressed as Spider-Man, called his real-life Mary Jane up to the stage and proposed.

"I want you to be my Mary Jane for the rest of my life," he said to her.

The man behind the mask, Columbia resident Jacob Carter, said he had been planning this for months.

"I had all my family here, secretly had her family here, she had no idea, so I think it was the perfect time to do it," Carter said.

The cosplay contest featured about 40 contestants and the looks were inspired by TV shows, movies, comic books, video games and more. The first prize winner took home $300 dressed as Nightmare from "Soulcalibur."

Here's what some of the cosplayers had to say about their looks and overall comic con experience.

Eddie Sharon is a Zumba instructor who recently had knee-replacement surgery. He said because of this, he gained some weight and saw it as a perfect opportunity to dress up as Thor from "Avengers: Endgame," who gained the nickname of "Fat Thor" following the movie's release. Sharon received an honorable mention from Comic Con at the cosplay contest.

"I like to call him Fun Thor. When the movie came out, he was originally Fat Thor, there was some uproar in the community, so we called him Bro Thor. But I like to call myself Fun Thor."

"I'm not usually a costume person. This is actually my first comic con. I said, 'You know what, I'm a little overweight. I'm gonna take advantage of it.' The movie came out, it all came together at the correct time."

"Just the environment. I didn't know what to expect, especially being in costume. Everyone's friendly, all of the actors are great. Organization, I like it, it's very well-organized."

Amber Walker came from Summerville, South Carolina dressed as Lady Loki. This is her first time in cosplay.

"This is Lady Loki from the Marvel comic series."

"Lady Loki is always a lot of fun to do. I like the ideas of villains having a good backstory and Loki has one of the best."

"I really like all of the event rooms and everything, I love seeing all the artists."

Mike Alloway chose a simple cosplay for this year's comic con: Morty from "Rick and Morty." His costume consisted of a yellow T-shirt and jeans with a Morty head. He also carried around a tiny Pickle Rick for the finishing touch.

"I'm Morty Smith from 'Rick and Morty.' This is my second year here at Soda City. It's just super fun to come here and talk to everybody."

"I did a pretty good Rick and someone said I should practice Morty, and then I did and I was the best Morty of Mortys. So, it just stuck."

"This year it was the "Batman" and Michael Rooker. Seeing him was pretty awesome, you know 'cause he's Mary Poppins, and all the outfits, I really like them. Pretty cool."

Soda City Comic Con will continue Sunday, Aug. 10 at the Columbia Metropolitan Convention Center. The schedule includes "Voice Acting 101, A Beginners Guide" at 12:30 p.m., "Surviving a zombie apocalypse with Seth Gilliam" at 1:30 p.m., "Voices of DC" at 2:30 p.m. and the children's cosplay contest at 4 p.m.

Check out our live tweets from today here.

Some fun cosplay looks today: Eddie Sharon is "Fun Thor" right at the entrance at his first Comic Con. He says his favorite part is the environment and friendly people. pic.twitter.com/USbeXIrFDJ