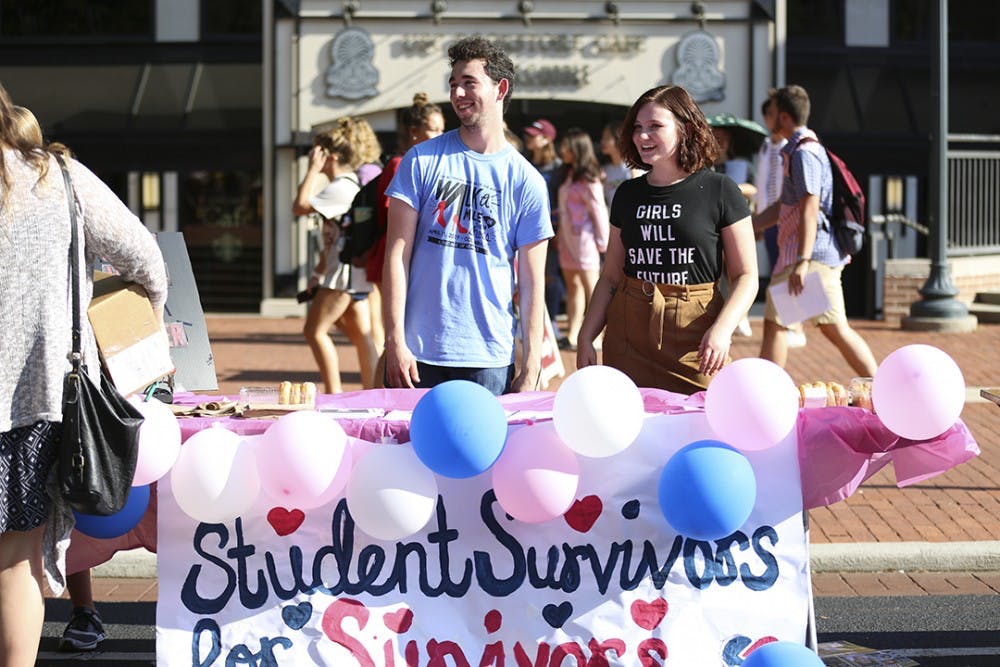 Walking down Greene Street Wednesday, you may have been offered donuts or coffee from various organizations trying to recruit new members. Among the tables lining the street was one of USC’s newest organizations, Student Survivors for Survivors.

Members of Student Survivors for Survivors say they are committed to providing resources, advocating for survivors of sexual violence and giving students a voice.

“We’re hoping the organization fair will allow us to bring in a lot of new people who might be interested,” Rosa Weiss, the president of the organization and a second-year anthropology student, said.

Student Survivors for Survivors came into existence after a group of students decided to change the dialogue around sexual violence and de-politicize the issue.

“It kinda got started in response to seeing a problem in society at large and then trying to narrow that down to concrete stuff that we could work with on campus,” Weiss said.

According to Luke Graves, the organization’s treasurer and a third-year political science and history student, the organization became official in March. The current executive board members say they are looking forward to their first full semester as a student organization and hope to work with the university and law enforcement in creating a safe space for students.

Coralie Kithianis is the organization’s vice president and a fourth-year experimental psychology student.

“I hope that in all of this, in some way, for at least some people, we can reverse the stigma around people not feeling comfortable enough to go get services,” Kithianis said.

Kithianis said she believes sexual violence is an issue that affects everyone and needs to be addressed. She also said she hopes this organization will help survivors find resources while also addressing the issue of sexual violence on USC’s campus.

“Because I hope that people continue to go here and be safe," Kithianis said. "I want to elevate the voices of those who’ve suffered sexual assault."

Graves and the rest of the executive board are planning events for this new semester that include spending Saturdays volunteering at women’s shelters and other nonprofits and holding a resource fair to promote services the university offers for survivors of sexual violence.

Members of Student Survivors for Survivors say they hope to hold an event called Light Up Five Points, where they hope to be in Five Points at night on a weekend as somewhere students can turn if they are in trouble and are scared to go to law enforcement.

“A large part of [Five Points] culture kinda involves avoiding the presence of law enforcement,” Weiss said. “And so having a student presence that’s able to help, or just present so that people know that there’s another outlet or avenue they can go to if they don’t feel comfortable for any reason approaching anyone else, I think could be important.”

Student Survivors for Survivors hopes to bridge the gap for students who survived sexual violence, Kithianis said, by being a place they can go for community while also pointing them to the mental health services they might not be aware of, the Sexual Assault and Violence Intervention and Prevention office and local law enforcement.

“Sexual assault is a intersectional issue,” Kithianis said. “It is a public health issue. It’s not just a political issue. It's across all kinds of groups it affects everybody.”

Student Survivors for Survivors meets on Tuesday's at 6:00 p.m. in the Russell House.