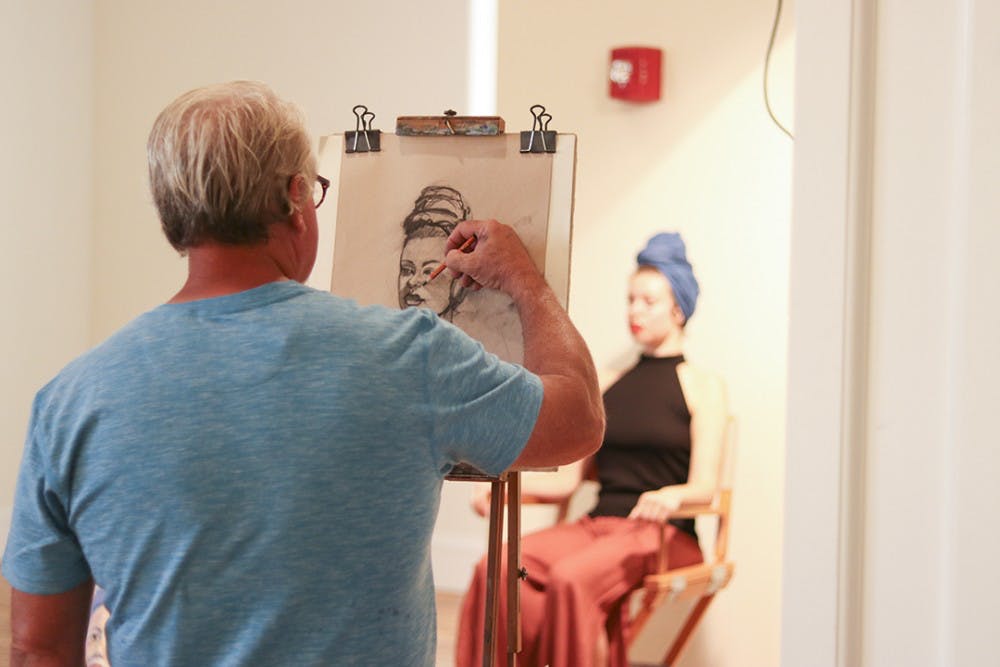 About Face might have been homeless at times, but its members always found home in each other.

About Face, a name that refers to portrait art, is a group of artists who specialize in many different disciplines of art. The group meets periodically to draw and paint across Richland County. They now have their own space, but it hasn’t always been smooth sailing. In fact, its beginnings were quite humble.

"We started meeting 23 years ago at the home of our founder, Craig Carlson," member David Phillips said. "We met in his attic."

There wasn't room for the group in the attic, so they moved their meetings to an art workshop in Richland County. As the group expanded they changed locations many times, including a former Sherwin-Williams paint store and Emily Douglas Park. They also met in the Columbia Museum of Art until the museum underwent renovations. As the members searched for a new location, they found 701 Whaley Street, where they're housed today.

Even when the existence of About Face was not guaranteed, member Roy Paschal said, the artists' passion outweighed the challenges. Sometimes, they would still be short on rent and model fees, even when a handful of artists came to About Face meetings.

“I am sure David supplemented our budget out of his own pocket to keep us afloat,” Paschal wrote in an email. “Many of us paid extra because we believed in the group.”

The members of About Face have a variety of skill levels. Actually, Phillips said, someone could join the group as a pure beginner.

"You hear people who say, 'I want to paint, but I can't draw a stick figure,'" Phillips said about one member who joined About Face with no experience. "And twelve weeks after that, he was selling stuff."

Paschal believes that the group benefits from different levels of skill because the members tend to learn from each other, no matter how many years they’ve been creating art.

“I have discovered new techniques and materials by observing other artists,” Paschal said. “We also critique other’s art and my fellow artist[s] can often see a weak spot that goes undetected by me.”

Member Noelle Brault said About Face has given her the opportunity to explore disciplines of art that she otherwise wouldn’t have explored.

“About Face is a wonderful way for me to challenge myself and to paint from life,” Brault wrote in an email. “Painting from life teaches you to really "see" the subject rather than just copying a photograph.”

Brault says she also enjoys About Face’s "plein air," from the French phrase meaning "in the open air," painting sessions. On the third Saturday of each month, the artists travel to different locations to paint the outdoor scenery. According to Paschal, these sessions can bring about humorous experiences.

“When we paint outdoors it is always an adventure,” Paschal said. “Passing trucks blowing paintings off easels, paintings being blown down the beach end over end.”

About Face's current exhibition at Tapp’s Art Center features figure, portrait and "plein air" art. Phillips said it took a long time to hold another exhibition because it’s challenging to organize a show.

"It's a lot of trouble," Phillips said. "I looked it up and it had been seven years, and I said, 'Well, let's look around and find a venue.'"

About Face members are optimistic about the group’s expansion and appreciative of the opportunities the group has given them throughout its 23 years of existence.

“I just hope that we continue to meet as often as we do. It would be very hard to go out alone and paint from life; especially as a woman,” Brault said. “About Face makes that possible.”

At 75 years old, Phillips doesn't know how much longer he'll be a part of About Face. However, he still has high hopes for the future of the group.

"I would like to see them grow as an organization, and as a group, and have a big following and have high standards for their members," Phillips said. "I'll see it from the grave if I see it at all."