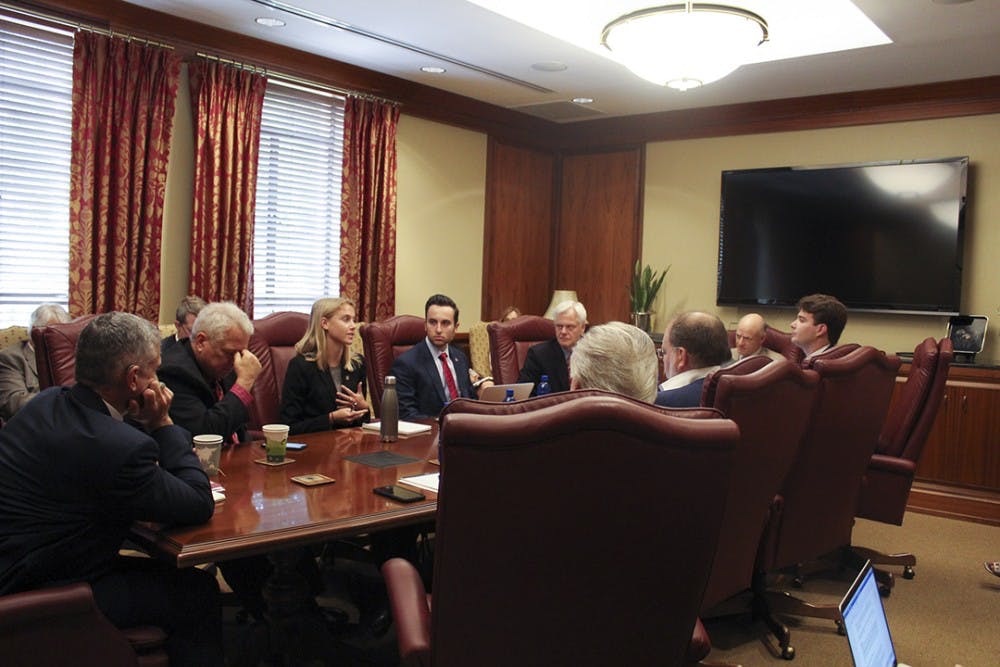 The university is planning to stop charging Greek students its $375 parking fee after this semester and intends to create 500 parking spots by August 2020 and 300 additional spaces by January 2022 with the $7.5 million collected from students.

“800 [parking] spots is the absolute best we can do,” university architect Derek Gruner said in a buildings and grounds committee meeting. “It’s all we can do given also the demands of, you know, commuters.”

The plan would give Greek students the AD3 commuter lot in between 650 Lincoln and Thirsty Fellow in August 2020, moving the commuter students to an intramural field at Gadsden and Devine. The new commuter parking spaces would be in a gravel lot, which Gruner said "would be a temporary solution."

Students who will use the new Greek lots in the future will pay a fee to use them to keep up with maintenance of the lot.

“You pay it forward. Those that paid for the houses in Greek Village didn’t live in the houses,” Rankin said. “We pay taxes to fix roads. The pothole in the road doesn’t get fixed the day you pay the tax.”

The plan for a 300-space parking lot next to Thirsty Fellow could potentially be completed by January 2022. It would include knocking down two USC buildings which currently hold a recently renovated theater that cost almost $250,000 for theater students and art studios for students in the School of Visual Art and Design. The theater and studios would be relocated to a warehouse which would be renovated at an estimated cost of $1 million.

Gruner plans for students to be able to park under the Blossom Street bridge that leads to Cayce and walk under the bridge to access Greek Village.

Gruner said many lots in the Columbia area contain foundations from old industrial buildings and said he believes this might be the case in the area where they plan to put the 300-space lot. The university doesn’t have to just pave the area, they will have to grade the site, drain it of storm water, pave it and install cameras, lights and call boxes for student safety.

“There is a building with us on every block, so when you build something new either something has to be transformed or rebuilt,” Rankin said.

College Panhellenic Association president Christen Piccioni and Interfraternity Council president Zach Goldberg met with the buildings and grounds committee to discuss Greek students’ opinion on the parking plan, as it did not include the originally promised parking garage with 1200 spaces and meeting spaces for Greek organizations.

They ran a survey in the Greek community to gauge the general consensus of what students wanted from this project and found that 78.7% of the 1220 respondents preferred a surface lot with a halt on the parking fee over the garage with a continued fee.

“I think those results really show that the fee and the necessity of parking is at the forefront of their minds,” Piccioni said in the meeting. “Our students are like, ‘We need parking now.’”

It was noted in the meeting Greek organizations could use meeting spaces in the upcoming new student union in the future.

This plan will go to the full board of trustees for approval on Oct. 11.

“The conditions change and as conditions change the original plan may change, and we've got to be able to recognize and talk about that and be transparent about it,” university President Bob Caslen said in the meeting. “Through transparency and communication we can get results … I think we’re moving forward to the right solution.”

Senior news writer Joseph Leonard contributed to the reporting of this story.