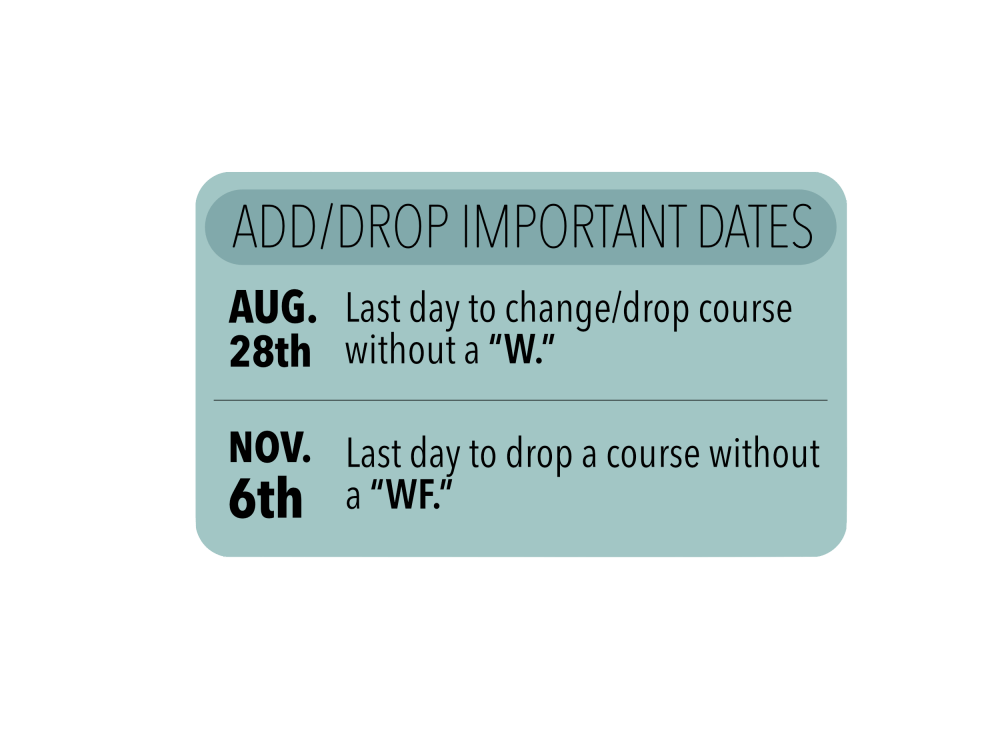 The last day to withdraw from a full-term class without failing the course is now on Nov. 6, which is several weeks later than it has been in previous years.

When students drop a class between Aug. 29 and Nov. 6, they drop with a "W." This indicates "withdrawn" and means the student's transcript will show a dropped course, but it will not affect the student's GPA.

Beginning on Nov. 7, students who drop a course will receive a "WF," or "withdrawn fail," on their transcript, which affects their GPA in the same way that failing the course would.

Some students believe the extra time to drop without receiving a "WF" could be beneficial but also see the potential troubles with the policy.

“It gives them more time to figure out what’s going on in their lives or what’s going on with classes,” Michael Mujica, fourth-year studio visual arts and design student, said. “I could see how a system like this could be taken advantage of by students.”

Catherine Studemeyer, associate director of exploratory advising and adjunct geography professor, says the later date to withdraw without a "WF" can help students who might need extra time to make sure they can succeed at a course or who might have a personal event that affects their performance in a class.

Some students are concerned the extended deadline will disrupt the assignment structure of some classes. Abigail Braun, a third-year public relations student, said her professor said students dropping courses involving group projects is a potential issue.

Alaina Feinberg, a fourth-year international business and accounting student, said she dropped a class and received a "W" on her transcript while studying abroad. She said she believes the beginning of a class can sometimes be deceiving, and when a class affects a student’s mental and physical health, it is OK to drop the course. She also said she believes the new, longer amount of time to drop with a "W" helps students considering dropping a class.

“I know plenty of people that have prematurely dropped a class because the deadline is so early,” Feinberg said. “I really like the idea that people can make a better decision because they have the time.”

While the last day to drop a full-term course without a "WF" is Nov. 6, the deadline to receive a 70% tuition refund is Sept. 1, 50% tuition is Sept. 7 and 20% tuition is Sept. 17. Partial-term classes might have different dates, which can all be accessed on Self-Service Carolina.

Additionally, dropping a course with a "W" might affect a student’s academic progression requirements, depending on major. Dropping too many classes might cause students to spend more money and stay on campus longer than intended.

“We want people to graduate on time, and we want them to graduate in a financially responsible manner,” Studemeyer said.

Studemeyer also stressed the importance of campus resources — such as the Student Success Center, academic advisers and professors — that students should use before dropping a course.