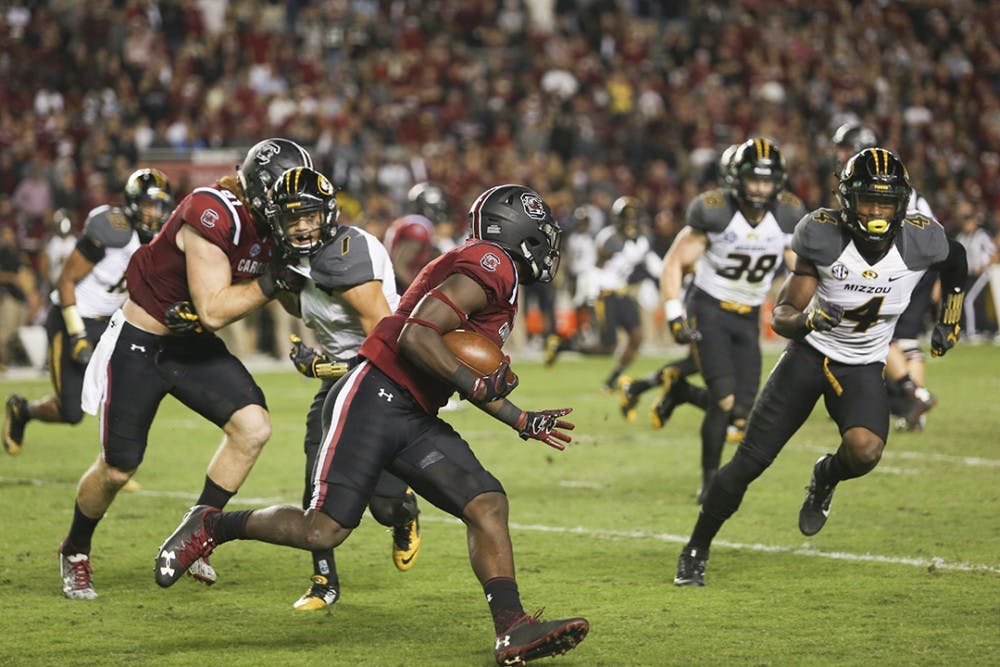 Column: Gamecock's defense gets another shot against Kelly Bryant

Last time the Gamecocks faced Kelly Bryant, he was at the helm of Clemson's offense.

Bryant started his 2018 season by leading the Clemson Tigers to a 4-0 record after a 12-2 season in 2017, when Bryant threw for over 2,800 yards and led the Tigers to an ACC championship victory. Then, Clemson head coach Dabo Swinney elected to bench Bryant for Lawerence, effectively making him the starter for the remainder of the season.

Bryant, from Calhoun Falls, South Carolina, was one of many quarterbacks this offseason in the transfer portal after Lawerence took over the starting job at Clemson. Bryant now finds himself on a new team as a member of the Missouri Tigers in his final year of eligibility.

"I'm from a small town in South Carolina," Bryant told ESPN. "I would have never thought I'd be playing ball out here. It's crazy how things work out."

Though Bryant is moving from the ACC to the SEC, there is one opponent he is already quite familiar with in his new conference — the South Carolina Gamecocks.

The last time the Gamecocks faced the Bryant-led Clemson Tigers was November 2017, Bryant's only start against the Gamecocks. While Bryant and the Tigers left Williams-Brice Stadium with a win that day, the result was more on Clemson's defense than Bryant's play. They held South Carolina quarterback Jake Bentley to just 126 passing yards alongside two interceptions.

Bryant's new Tigers, the Missouri Tigers, have opened up the season at 1-1. In week one, Bryant committed two costly turnovers late in the game against Wyoming and lost 37-31. Missouri bounced back with a week two victory over the West Virginia Mountaineers by a dominating score of 38-7.

In Missouri's loss against Wyoming, Bryant threw the ball 48 times. While he completed over 60% of his passes and threw for over 400 yards, Bryant's two late turnovers were instrumental in the team's loss. To go along with the turnovers, both Missouri's rushing attack and defense struggled, pinning most of its game plan on Bryant's arm.

The opposite could be said for the win against West Virginia, who only scored seven points. Missouri's defense forced three turnovers, including an interception returned for a score. Meanwhile, their rushing attack ran right through the West Virginia defense all afternoon, led by running back Larry Rountree III's 104 yards.

Because of the stellar defense and solid rushing attack, Bryant only threw the ball for 150 yards.

What does this mean for the Gamecocks as they get ready to face Missouri? Force Kelly Bryant to throw the ball plenty by stuffing the run game — just as they did against Charleston Southern.

When they faced the Charleston Southern Bucaneers, the Gamecocks held them to just 72 yards on the ground. That forced plenty of footballs in the air, three of which the Gamecocks turned into interceptions.

While it is a small sample size with so few games played in the young season, Bryant has lost a game for the Missouri Tigers when forced to throw the ball. This is not the same luxurious offense he commanded at Clemson.

If Will Muschamp's defense can force Kelly Bryant to put the ball in the air in the week four matchup, the Gamecocks could provide him with a proper welcome to playing against SEC defenses all season.