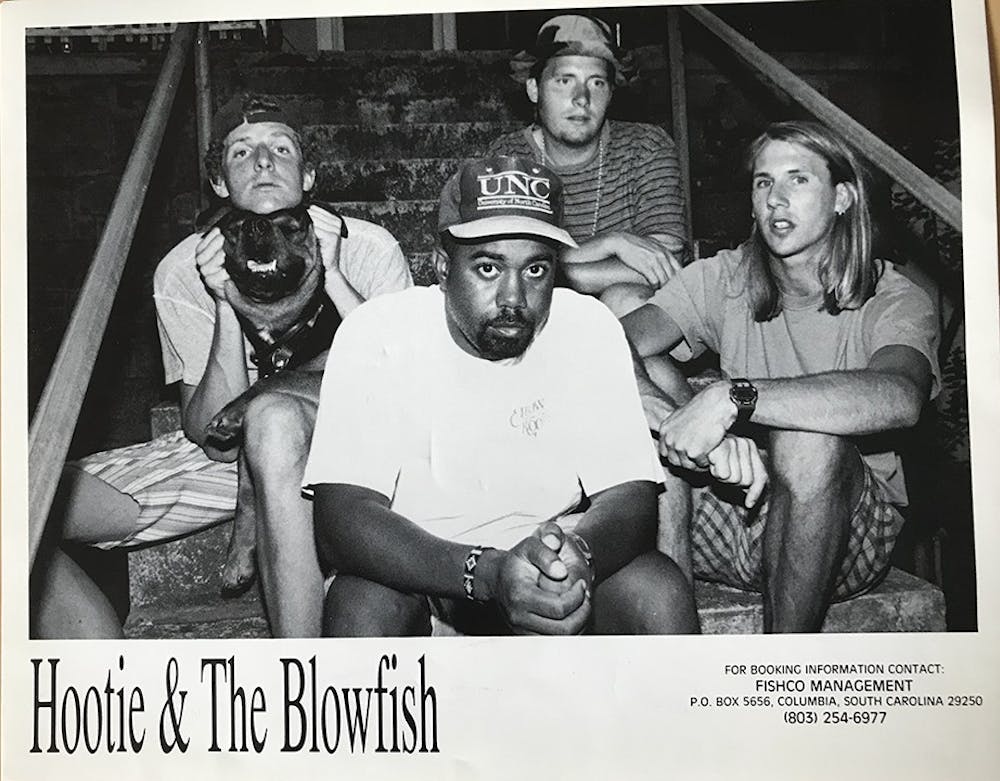 Few bands see their music passed down through generations, standing the test of time. According to Michael Miller, Hootie & The Blowfish is one of the rare groups that has done just that, and nowhere is its legacy stronger than the city of Columbia.

The band started to take shape in 1985 when freshmen Darius Rucker and Mark Bryan met at USC. Jan Smoak, current director of scholar programs at USC, was also a freshman at the time. In one of her earliest college memories, Smoak recalled meeting a friend at The Honeycombs, student housing once located where the Honors Residence Hall now stands, during her first two weeks of class.

“During our evening, there was just a group of guys and girls who had assembled in somebody’s room," Smoak said. "They started playing and just singing songs, right? Just kind of like this really impromptu little music circle, and Mark and Darius were part of that little circle of friends that we were all hanging out with.”

This music circle was just the beginning of Bryan and Rucker's collaboration, as the two would soon join up with fellow students Dean Felber and Brantley Smith to form Hootie & The Blowfish, whose name was inspired by two of Rucker's friends from Carolina Alive. It wasn't until 1989 – long after the name was settled – that Jim Sonefeld filled in for Smith on drums.

“I think if I had a vote, I would’ve said, ‘No, that’d be a horrible name for a band,’” Sonefeld, who still lives in Columbia today, said.

Regardless of his thoughts on the name, Sonefeld would eventually join Hootie out of a shared interest in writing original music. At the time, Sonefeld was a member of Tootie and the Jones, another USC band, and was sitting on a track that would one day become one of Hootie's most recognizable hits: "Hold My Hand."

In a maneuver John Furr, a friend of the band, calls the "Hootie-Tootie Shuffle", Sonefeld left Tootie and the Jones to join Hootie & The Blowfish, bringing "Hold My Hand" with him. The track would go on to chart in Billboard's Top 10 in 1995 and find a spot on the band's 21-time platinum album, "Cracked Rear View."

Despite this apparent loss of a major hit, Tootie and the Jones' lead singer, Murray Baroody, said there are no hard feelings between the two groups.

“They have been so gracious to me over the years," Baroody said. "I’ve had the opportunity to sit in and play just a few songs here and there throughout their tours over the last 25 years and been able to go, kind of, travel some shows with them, and I was fortunate enough to get to spend a little time with them on this tour, as well.”

Many of Columbia's residents recount similar stories of generosity extended from the members of Hootie.

Furr lived next door to Rucker and Felber around 1989, when he was in the band Blightobody. He said there was a healthy competition between himself, Hootie and the other local bands as they raced to see who would score a record deal first.

In 1994, both bands received a major platform on which to showcase their music. Blightobody won a competition to perform on "Late Night with Conan O'Brien" and Hootie received a call on behalf of David Letterman to appear on the "Late Show."

Hootie was suddenly at the center of national attention, but the band didn't forget its friends in Columbia.

Hootie bought a new Gamecock garnet van, and when Blightobody's van broke down, Hootie sold its old one to them. However, Blightobody couldn't afford the van just yet, so the members of Hootie said to just pay them back when they were able. This generosity, Furr said, is just who the guys are.

Hootie & The Blowfish later brought MTV to Columbia when they performed an unplugged concert on the Horseshoe. Since Sonefeld was a member of USC's soccer team, MTV did a piece showcasing Stone Stadium. Mark Berson, head coach of the South Carolina men's soccer team and a mentor to Sonefeld, said MTV's stop in Columbia was significant for the small city.

“To my knowledge, it’s the only stadium that’s been on MTV, which for students right now might be just a blurred memory way back, but at the time it was a pretty big deal,” Berson said.

MTV shined a spotlight on Columbia, putting it on the map as an area worth visiting for its pop culture relevance and vibrant music scene.

Perhaps the greatest aspect of the band's success story lies in its hard work. Hootie spent years practicing in front of crowds at bars in order to perfect its craft, according to Sonefeld. Their first show at Rockafella's, one of Columbia's former music venues, saw a crowd of about 25 people. A few years later, they were selling out venues.

Nobody can claim they lucked into their success, Miller said.

“I don’t know who it was, it might have been Soni or Mark or somebody told me, 'We toured for 10 years in a beat up Ford van, all of us sleeping in the back of it and smelling each other’s feet and stuff, trying to sleep. If we can get through that for eight or nine years or whatever, this is easy,'” Miller said. “They paid their dues for a lot of years on the road.”

After their first record deal fell through with a small label out of California, the band decided to do their own promotion. They sold their EP, "Kootchypop," at their shows, and their sales picked up so much traction that they caught the eyes of record labels, leading to their deal with Atlantic Records.

Sonefeld was one of the hardest working players to ever wear a USC jersey, Berson said, so it was only natural that he'd devote that same energy to his music career.

“That was not any surprise that that translated into the type of attitude and the type of willpower that you have to have to succeed in something like the music industry, which is really, obviously, really, really tough," Berson said. "You not only have to be talented, but you have to be willing to work really hard, and really dedicated.”

Hootie & The Blowfish are now on the tail end of their first tour in over a decade, which also happens to be their most successful tour in history, grossing over $10 million. Their three night stop in Columbia this week will round out the North American leg in a series of sold-out shows.

“We never felt special," Sonefeld said. "And we never really even felt that our music was that special, but we had a strong belief that if we got to a bigger audience, that they would eat it up, that they would really like it.”

Sonefeld said Hootie & The Blowfish have no plans to continue recording or touring after their Group Therapy Tour comes to an end. However, fans can rest assured that the band won't be breaking up any time soon, either.

“Sometimes when a band’s together for 25 years, you kind of get tired of hanging out with them, but they haven’t," Miller said. "They’ve had a very strong bond, like a family."

Hootie & The Blowfish will play three nights at Colonial Life Arena Sept. 11 to 13. Their album, "Imperfect Circle," the first since 2005, comes out Nov. 1.