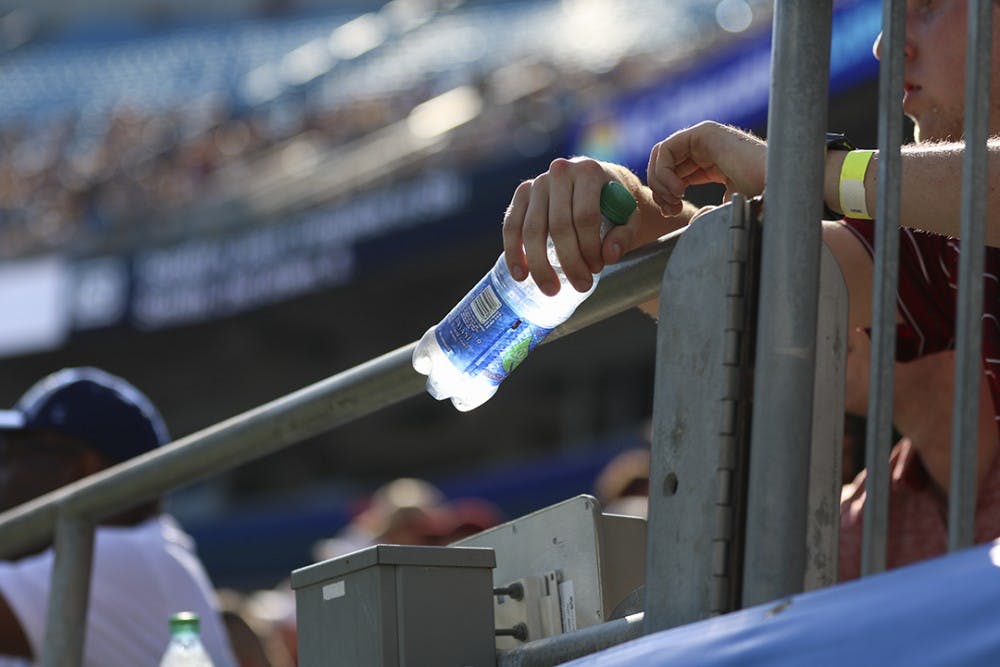 Column: Why hydration is important for fans during football season

Many can recall the familiar feeling of standing in the student section of Williams-Brice Stadium for a noon game with the sun beaming down on you. You may have had a little too much to drink and you start to feel a little faint. You realize you need water, but don't want to lose your great spot in the student section. You're dehydrated — and the heat isn't helping.

On way to avoid dehydration may seem obvious, but is keeping up with drinking fluids.

According to the Centers for Disease Control and Prevention, 43% of adults don’t drink enough water. Even if you do not like the thought of lugging around a bulky CamelBak or Hydro Flask, there are other ways to rehydrate.

Eating plenty of fruits and veggies and sports drinks are two of the many ways to stay hydrated.

Even more specifically, dehydration is an issue students at the University of South Carolina face during football games, especially those held during the warmest part of the afternoon.

Hot or humid weather can cause you to sweat more, requiring additional hydration. Dehydration is the loss of water and salts from the body. Signs of mild or moderate dehydration include thirst, dry or sticky mouth, not urinating often, muscle cramps and headaches.

The University of South Carolina has made several efforts to ensure fans and students have an enjoyable and safe time with the high temperatures most likely coming with noon kickoffs. Mist fans and free water refill stations have been installed, and the prices of water bottles are lowered.

University of South Carolina students can now also purchase water for $1 after the third quarter behind the student section.

Still, a majority of students do not use these resources due to lack of prior knowledge and long lines. In addition to EMS providers, there are water refill and first aid stations outside of each section in the stadium. These are good to make note of, especially if you have a minor or heat-related injury.

Pregaming often has a huge impact on college students not staying hydrated. This is the practice of consuming alcohol before attending a social function. Often times, pregaming is synonymous with tailgating during the Carolina football season.

As students gather together to prepare for these football games, they tend to forget to hydrate while consuming alcohol — which contributes to dehydration. Alcohol is a diuretic, which causes you to use the bathroom more frequently. This is associated with the lack of antidiuretic hormone, that causes water reabsorption.

Several students and general fans have been taken out of Williams-Brice Stadium on stretchers by emergency officials. That is not the way anyone wants to end their Saturday.

If students stay hydrated, it's more likely they will avoid going to the hospital or having to be treated by emergency officials. Even if fans wish to consume alcohol, it's crucial that water be alternated with alcoholic consumption.

While everyone wants to have fun and make the best memories on game days, it's important it's done in a safe and responsible way — especially with those noon games in the heat.

Here are some tips for Gamecock football fans and students for the upcoming season:

1.   Drink plenty of fluids leading up to game day and the day of

4.   Take frequent breaks out of the direct sun

5.   If needed, ask for assistance from emergency medical providers