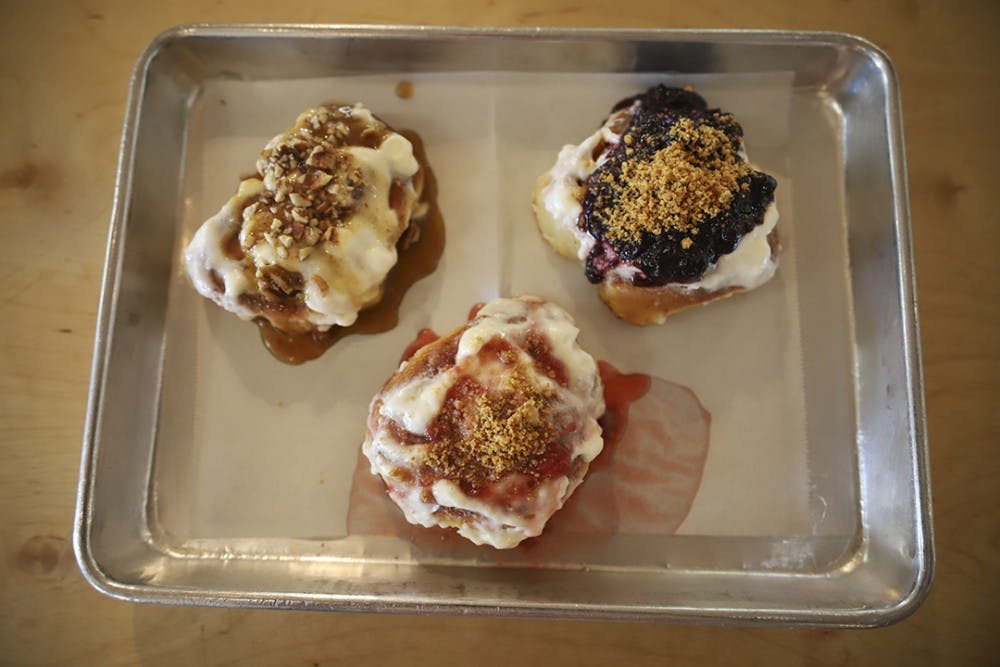 When The Devine Cinnamon Roll Deli opened in 2016, owner Jody Kreush had no idea people were going to like it.

Kreush co-owns the deli with her son, Richard Kreush, a recent USC graduate. Everything in the Cinnamon Roll Deli menu reflects what their family loves eating from around the country and incorporates aspects of what Jody Kreush grew up eating.

Growing up in New Jersey, Kreush said she was exposed to a diverse food culture with large portions for a reasonable price. When she moved to South Carolina for her husband’s job, Kreush said she noticed a need for reasonably priced and culturally diverse homemade food. She said after working her whole life in the restaurant industry and witnessing corporations treat employees like just another number, she decided to open her own shop, where she could treat her staff and community better.

“We try very hard here to make sure everyone feels like they're coming into our house,” Kreush said.

The front of house manager, Sarah Cogburn, said the community at the deli is "very big, very friendly" and still growing.

One of the deli's regulars, Sara Jo Kent, has been going to The Devine Cinnamon Roll Deli since the beginning and continues to come at least three days a week. Working right down the street, Kent said the deli is “not your typical fast food restaurant,” with excellent food quality and good portions.

However, Kent is not the only customer to have a close relationship with the restaurant. Another regular, and now lifelong friend, according to Kreush, has brought flowers into the deli every week after finding solace in the staff and food when her husband died.

“We do as much as we possibly can for them as a community,” Kreush said.

On top of personal customer relationships, the deli uses its wall space to showcase artists in the Columbia community, including USC students. A percentage of the earnings the artists make are donated to the SQ Rescue animal organization, and pictures of the animals can also be seen hanging on the walls of the deli. One of the artists, a 10-year-old girl, was inspired by the cause and donates 100% of her earnings to the organization.

The “very welcoming, friendly” ambiance, as Kent said, is not the only thing that attracts people to the deli. The food, as described by customer Jenna Maschino, is “super yummy.”

Made in-house with no preservatives, the deli uses ingredients from all over the United States in its food, Kreush said. Its NYC Pushcart Dogs are special ordered from New York, its coffee is bought locally from the South Carolina company Cabana Coffee and its salamis and capicola are shipped from the north.

Nationally recognized for its Cinnamonster by Food Network, the deli’s cinnamon rolls are described on its menu as being rich, flavorful and buttery. Kreush said the cinnamon rolls are made using a special sweet bread recipe created by her brother, who lives in Hawaii. The combination of its unique cinnamon sugar blend, vanilla and cream cheese frosting and its many toppings amounts to what the deli's website calls “a little taste of paradise.”

Kreush said they try to make the restaurant like "a little oasis." No matter who walks through the door, Kent said the staff at the deli works to make sure their customers are pleased.

“They go above and beyond and out of their way,” Kent said.

Since its popularity has grown, Kreush said The Devine Cinnamon Roll Deli’s sign has become a popular spot for photos. When people come into town, they are willing to wait in line for over an hour to in order to get into the deli because “it’s always a place that everyone wants to say they’ve gone to.”

From the community they have created and the food they have shared in the past three years, The Devine Cinnamon Roll Deli’s mission to represent the heart of South Carolina is achieved through “peace, love and cinnamon rolls.”