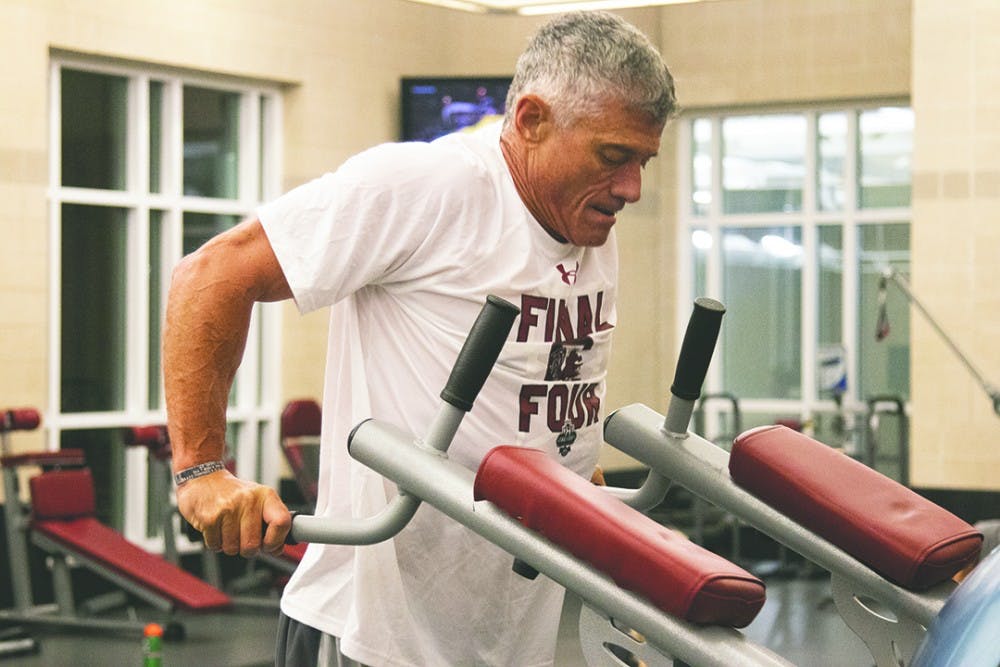 Twice a week, USC President Bob Caslen invites students to join him for his morning full-body workout. On Tuesdays, the workout is in Blatt PE Center. and on Thursdays they gather in the Strom Thurmond Wellness and Fitness Center.

The regimen involves aerobic and strength building exercises. Despite the challenge, 15 students woke up early to participate in the 6 a.m. workout Caslen created.

“This was a tough one,” Caslen said. “This was a hard one. I made it hard intentionally.”

Caslen has around 20 different workout routines he has created for a full body workout. While he invites students to train with him twice a week, he also does a similar routine six days a week on his own.

Caslen is the former superintendent of the U.S. Military Academy at West Point. While there, he invited his students to join him for a similar workout weekly.

“I want to reach out to the students,” Caslen said. “I want to make myself available. I want to get a chance to do things with them, and talk to them and see what’s on their mind, see what their concerns are, and this is a good opportunity to engage with students.”

German exchange student Sascha Stutcenberger served in the military back home and has good friends from the U.S. military. When he found out Caslen was in the military, he decided to join him for the workout.

“You wouldn’t find a president of a university in Germany that is going to the gym at 6:00 and working out with the students, so that is something completely new for me,” Stutcenberger said.

Stutcenberger has participated in Caslen’s workout three times now. He said it is difficult but is ready for the day after he finishes.

“It’s a challenge, because he’s doing the program, and he is normally finishing it first,” Stutcenberger said. “And I want to get close to him so that’s my challenge, and I’m excited about it. But it’s tough.”

Erden Ucok, first-year mechanical engineering student, said he enjoys exercising and waking up early in the morning, which motivated him to join "PT with the President." His favorite part of Caslen’s exercise routine is the challenge.

Ucok said he believes it is encouraging to work out alongside the university president.

“I think it’s a great way to kind of, bring in the community a little bit closer together or a great way to socialize and get to know some students better,” Ucok said.

“I’m an intern in [Caslen’s] office, so it’s kinda cool to see him outside of the office setting and get to know him a little better, even though he's a man of few words,” Massar said.

Massar said Caslen has brought all of the interns in his office to his morning workouts to bond outside of the office.

“It’s kind of something to rally around, which is really fun,” Massar said.

Massar plans to continue doing the president’s workouts for the rest of the semester because it improves the rest of her day.

“I hate to say it, but I now am starting to like waking up early,” Massar said. “I get in, get the workout in, go to work and I’m feeling pumped for the rest of the day.”

Caslen said he hopes to not only promote the importance of physical exercise and a healthy lifestyle but also to bring the campus together.