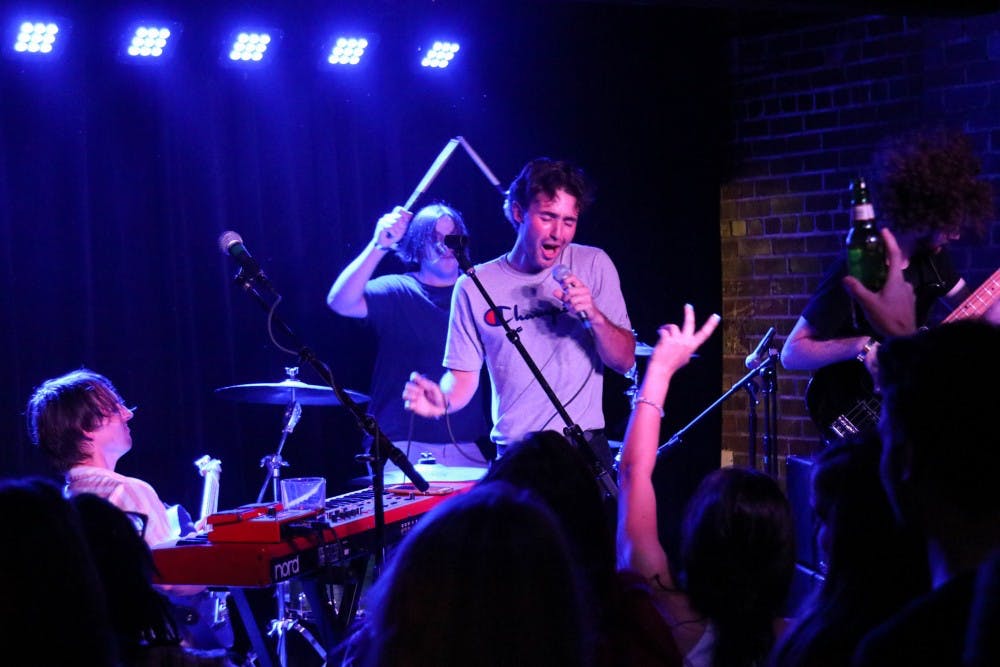 The White Mule was filled with the bobbing heads, waving arms and stomping feet of fans as Stop Light Observations played “For Elizabeth.” Just a few hours earlier, the same band that screamed onstage above the clamor of fans and music played quietly in an intimate backstage performance, using nothing but their voices and a couple of guitars.

Lead singer William Blackburn softly strummed his guitar as he explained the origin of a new song. He described himself as not being especially big on family, always feeling like the odd bird out.

He recalled being snowed in on a family trip for his grandmother’s 80th birthday, sitting in the basement of a house, playing chords on his guitar and looking out as snow fell on the lake.

"It was very peaceful," Blackburn said, "but it was dark, and it just felt sad and eerie the whole time, too, so, I couldn’t help but just feel those feelings. And then at some point I felt like, you know what? It’s all going to be OK. It’s all going to be alright. Because it always is, you know; it’s just always gonna be that way.”

The gentle acoustic song that followed was far milder than the hard rock that would captivate the audience later that night.

When asked why he makes music, John Keith “Cubby” Culbreth, who plays piano, guitar and synth for the band, said if he didn’t, the egg salad sandwiches he makes are "way off key". Bradford agreed with the odd metaphor for music’s impact on their lives.

Drummer Luke Withers said he had always loved music but never really thought about playing it until high school.

The band started playing in high school in Charleston together but has been through several evolutions since, Blackburn said. Though the foursome of Cubby, Bradford, Withers and bassist, Will Mahoney, is the smallest band they’ve ever had, Blackburn said that it’s the best quality of sound they’ve ever made.

Blackburn is not alone in his belief. Third-year public relations student Amanda Whalen, who has seen the band perform at least ten times, said that it was one of the best shows she has been to.

“They’re just so excited and animated, I love it,” Whalen said

Quinton Earp, another returning fan, said this was his fifth, sixth or even seventh time seeing the band perform. Earp found the venue intimate, saying it was hot, sweaty and everybody was feeling the music.

The band’s laid-back conversation in the green room and the raw and quiet acoustic soundcheck showed their complexity as artists beyond the rock band the crowd comes to see.

“They, like, always try to ad-lib, too, which is awesome,” Earp said. “That’s my favorite part.”

Whalen said Charlestonians follow the band wherever they go. Whether it’s bringing more flavor to an egg salad sandwich or encouraging a crowd to dance away a Friday night, Stop Light Observation’s music resonates with band members and fans alike.