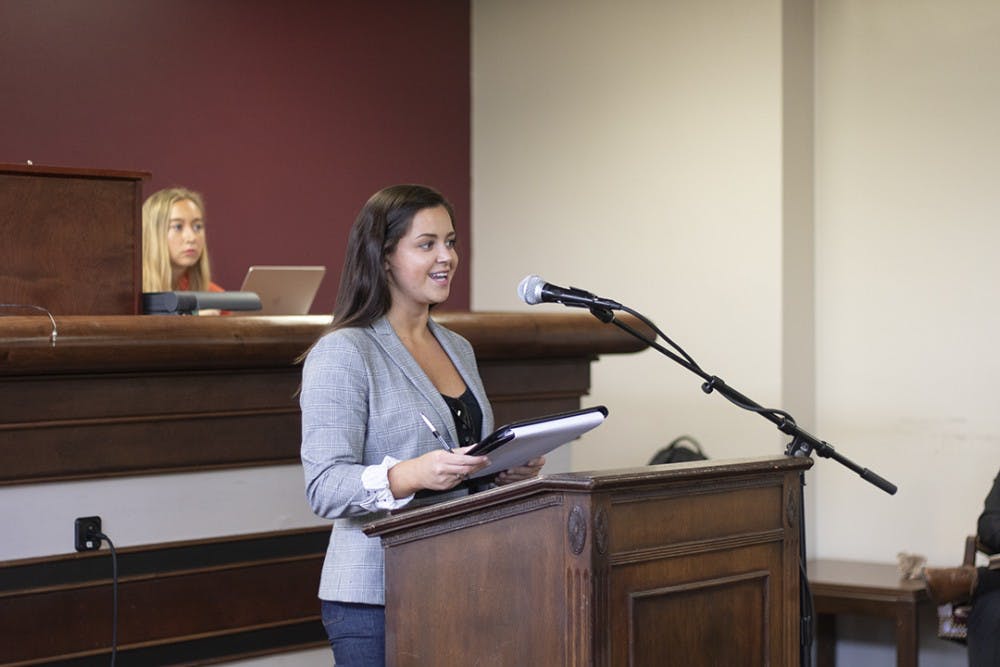 With more than 34,000 students on campus, the Department of Student Life receives about $2.61 million, and each student pays an average of about $8 into Student Government’s overall budget.

Former university president Harris Pastides approved the programming and operational budgets after they were approved by the student senate and Student Body President Luke Rankin in April.

The associate vice president of student affairs determines how much will be made available in the student activity fund, which is the budget used to fund activities planned by recognized student organizations other than Student Government and Garnet Media Group. This year, $185,367 has been allocated to that fund.

After the finance committee decides to grant a fund request, the chairman takes it to the student senate for official approval.

“Our primary goal is making sure organizations get money that they request for,” said Morgan McDonald, the student senate finance chair. “If we find that it is very valuable to our community, if they’ve shown receipts and shown that all of this is working within our guidelines, finance committee rarely finds reason not to allocate that money.”

The committee meets Fridays to consider student organization requests for funding based upon the Student Government Codes and Finance Guidelines.

For this fiscal year, from July 2019 to June 2020, Student Government is spending $36,512 to fund its operations, which includes everything from office supplies to costs associated with the use of the Leadership and Service Center, as well as conferences, stipends and technology fees.

This year, Lewis set aside $500 for an executive fund that, if approved by the executive officers, Student Body President Luke Rankin could use for emergencies without additional student senate approval.

The budget also includes $5,949 for travel expenses for conferences and lobbying to local and federal government.

“With the younger generations coming in, it’s a good bonding thing right off the bat, and so it’s proved beneficial,” Lewis said. “They always use dues first, and then it goes into this budget.”

Freshman Council also has a $1,500 New Initiative Fund, separate from Student Government’s Inter Monetary Fund, to start its own initiatives in the students’ first year at Carolina, but Lewis said the money is more about the first-year students in the council’s growth.

“We want to give them a little leeway ... [to] create something you’re passionate about,” Lewis said. “We want to show them that they do have the power and ability to make a change no matter what year you are.”

Lewis said last semester, a group in Freshman Council used a portion of the New Initiative Fund to buy metal straws to limit the use of plastic straws on campus and handed them out to students on Greene Street.

For this fiscal year, Student Government is spending $21,057 on programming and events for students on campus.

Student Government’s elections commission budget uses more than $3,000 for Student Government executive officers and senators’ inauguration in Rutledge College, including food, flowers, programs, invitations and flowers for the executive officers. Lewis said the event is free and open to all students as well as professors and families and friends of students being inaugurated, but the occupation limit according to the university’s fire codes is 100 people.

This year $750 is set aside for Mental Health Week, half the amount spent on the week-long initiative last year. Lewis said the decrease in funding is due to other organizations getting involved in the week-long event and contributing to the costs involved.

Student Government is also hosting a mental health workshop that will spend $200 on a room to work with Hilinski Hope, a mental health foundation promoting wellness in athletics.

About 17% of the programming budget is still in the process of being developed in a pool of money called the Inter Monetary Fund. Formerly known as the New Initiative Fund (not to be confused with Freshman Council’s Initiative Fund), this is a chunk of the budget set aside for members of Student Government to create their own initiatives on campus. Any and all money taken out of this fund must be approved by the student senate. Freshman Council has its own New Initiative Fund, and the Inter Monetary Fund is open to the rest of Student Government to utilize.

“This fund is the $3,500 just to continue to allow Student Government to grow and reach more people,” Lewis said. “The goal of that is just to engage the campus and build the Carolina community.”

Some new initiatives from this year’s executive officers already have money set aside in the budget outside of the Inter Monetary Fund, such as Key Week, Diversity Week, Greek Night, the Election Night Soiree and the 9/11 Memorial.

Key Week will hold workshops aimed to prepare students for the professional world, and will take place from Sept. 30 to Oct 4. Diversity Week is also set to take place from Sept. 30 to Oct. 4 and works to promote and celebrate diversity on campus. Greek Night is a basketball game for students and alumni in the Greek community. The Election Night Soiree is listed as a new event to allow the new Student Government officers, students and student media to talk and network. The 9/11 Memorial will work to aid student veterans. Student Government has not yet released information on the 9/11 Memorial event.

Student Government is spending $5,110 to advertise and promote its events and aims to encourage students to get involved in some way or another. Lewis said a good portion of this part of the budget is spent on merchandise, like buttons to hand out on Greene Street.

“People that are hyper-involved on campus tend to come to more events because they’re aware,” Lewis said. “Our goal is to reach out to that person that literally just goes to class and comes home.”