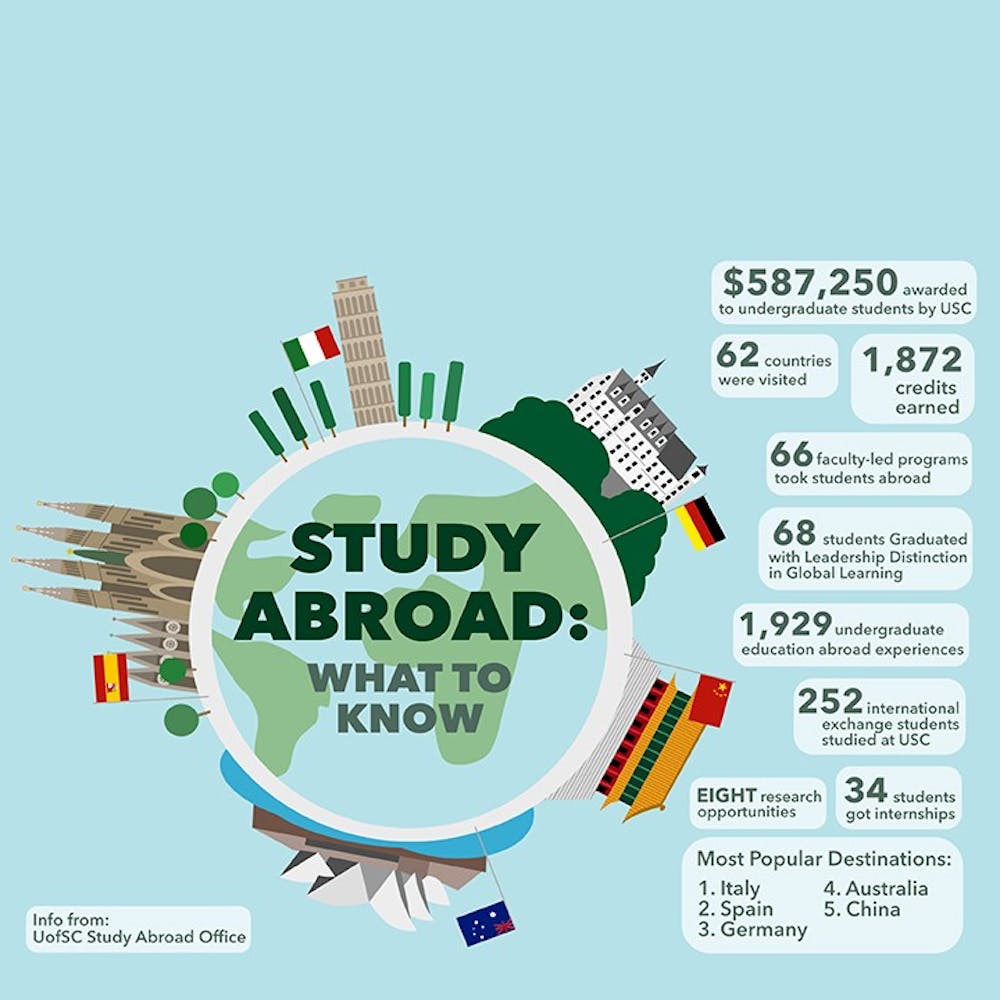 Having the chance to travel through the university is a once-in-a-lifetime opportunity that students often miss out on because of a wide range of concerns.

One threshold that has already been crossed is promotion within specific colleges across campus. Some colleges designate study abroad ambassadors to promote international opportunities.

“There’s wonderful touch points throughout the university where everybody works in this very collaborative energy to then promote study abroad,” Grudzinski-Hall said. “I think that’s why we’re seeing the growth in our numbers.”

One concern students often have is graduating on time and if studying abroad will deter their progress.

“Study abroad should be an enhancement, a nice complement to what they’re doing here on campus, but it shouldn’t hinder or halt them in any way with their studies,” Grudzinski-Hall said.

Something often addressed, but can never fully be guaranteed, is safety.

Victoria Brigadier, a fourth-year international business student, studied abroad in Jerusalem, Israel, the spring semester of her third year and went to Spain directly afterwards. Since Jerusalem is considered a “destination of risk,” Brigadier filled out a mandatory form acknowledging potential danger.

Grudzinski-Hall said safety is one of the study abroad office's main priorities for students, but lack of trust is one of the downfalls that causes students to miss out on the opportunity to venture out of their comfort zones. Safety is not only the program’s concern, but should be an individual concern too, she said. Taking ownership of one’s safety is important, and the study abroad office offers resources to help students prepare. Brigadier, who personally experienced it, agrees.

“Some days were harder than others, just because it’s a different culture and it takes a while to get used to, but I wouldn’t have traded that for where I was,” Brigadier said.

The study abroad office website features a student identity section that includes frequently asked questions by students who have studied abroad in the past. This addresses heavy topics students have on their mind prior to going abroad.

In large cities filled with potential dangers, the program eased some students’ concerns.

Another potential concern for students is the language barrier.

Olivia Williams, fourth-year anthropology and Spanish student, studied in Cadiz, Spain the summer after her second year. Being in a non-prominent English speaking country gives students the opportunity to expand their language comprehension, or for Williams’ case, apply what she had learned.

“The language component was hard because they didn’t speak any English, but I improved so much because I was really forced to just speak and listen,” Williams said.

Financial concerns are also often a deterrent in students’ enthusiasm of studying abroad.

Gilman’s Scholarship is a national scholarship that can pay up to $5,000 of the trip which sometimes covers the entirety of a summer study abroad trip. There is a workshop called “Money Matters” that discusses the financial aid portion of the trip.

There are also six hours of drop-in advising available every day for students who have personal concerns, general questions or are looking for other available resources.

After this meeting, students should have an idea of where they want to go.

“Look outside of your traditional study abroad places,” Brigadier said. “Don’t overlook those countries just because they’re not as popular, because I think sometimes your better experiences are doing things that aren’t popular.”

Preceding the trip, students will attend preparation workshops, including pre-departure guidelines and meet-and-greets with students who have previously been abroad. The goal is to build students’ confidence and make them feel comfortable before leaving.

“Make sure that you’re just open to the new experiences,” Yi said. “Even if you do get a little homesick, you’ve just got to think, ‘OK, well, this is only for a couple weeks, I can totally do this.’”