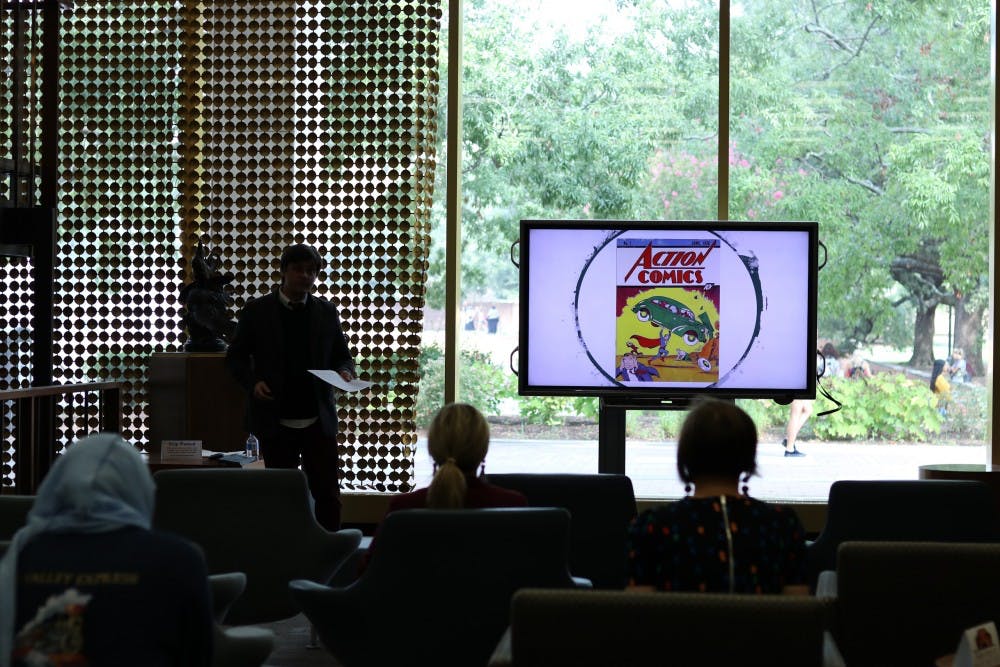 This semester’s TCoop Talks aim to bring faculty from different departments and students at USC together to talk about comics and how they relate to various fields of study.

The first TCoop Talk of the fall semester, "Superheroes and Social Justice," hosted by the University Libraries’ Outreach Committee, took place on Tuesday in the Thomas Cooper Library.

Nicole Carrico, a communications manager for University of South Carolina Libraries, discussed the ultimate goal of these talks.

“We’re fostering conversations about our world – technology and social justice for example – and also topics that are more individual, like self-expression and resiliency,” Carrico said in an email.

Michael Weisenburg, the education and outreach librarian for the Irvin Department of Rare Books and Special Collections, gave the talk and was one of the Four Color Fantasies comic book exhibit curators.

Weisenburg believes that comic books allow people to explore history and get them engaged in meaningful discussions.

The talk covered the use of superheroes in these comics to address social justice issues.

“It’s sort of at the core of what defines a superhero, is this idea to fight on the behalf of others,” Weisenburg said.

“One person acquired this over the course of his life, and rather than sell it, rather than break it up, he gave it to a public institution so people can enjoy it,” Weisenburg said.

Weisenburg believes comics can also be relatable to people who have just seen the same superheroes in movies. For example, exploring the stories in a different media can uncover different versions of the superheroes' stories.

The University Libraries’ Outreach Committee plans to continue hosting monthly TCoop Talks, with "Comics and Censorship" on Oct. 8 and "Riverdale’s The Black Hood" on Nov. 12. These talks will continue to draw inspiration from comics in the Four Color Fantasies exhibit to facilitate discussion between students and faculty on campus.

Tyler Griffin, a history education graduate student at Winthrop University, plans to teach high school history. He said he wants to incorporate comic books into teaching as a way to relate to high school students. Griffin said he believes that comic books provide a unique outlet to tell stories and provide a way for people to critique society and introduce social change.

“The meanings behind it go a lot deeper than some people think," Griffin said. "They just say like, ‘Oh, it's just Superman flying around and doing whatever,' but when you actually start reading, it gets really in-depth and [turns into] really interesting stories."