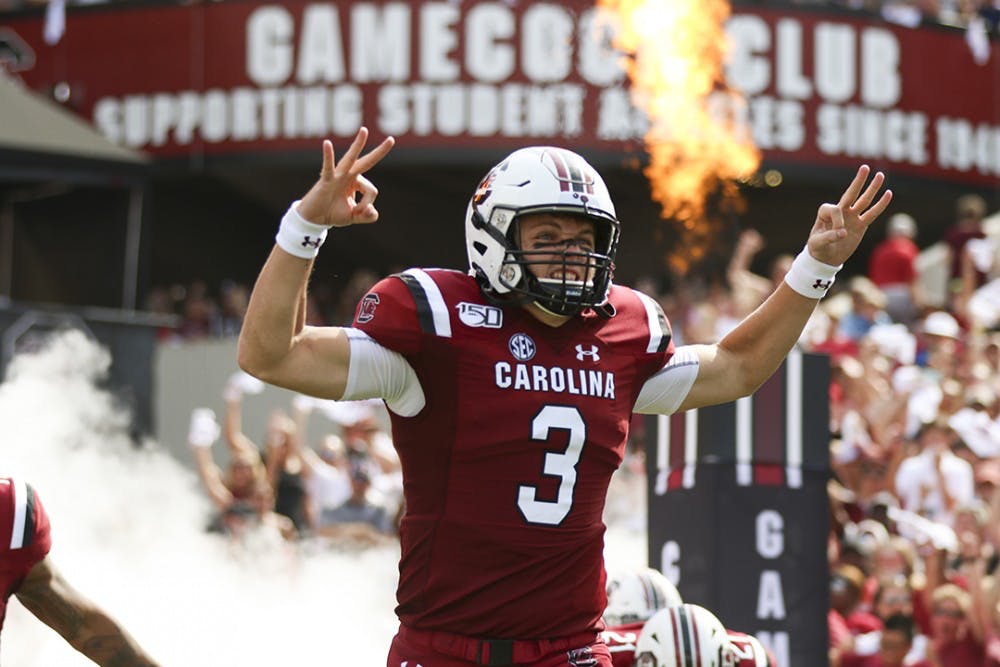 Freshman quarterback Ryan Hilinski’s path to South Carolina has been like no other.

Hilinski, a four-star pro-style quarterback out of Orange, California, enrolled at South Carolina earlier this year in January to begin spring workouts with the Gamecocks.

The Gamecock community was aware of Hilinski’s quarterback talents in high school, but one other thing stood out about Hilinski: his passion, love and loyalty for his late brother, Tyler.

Tyler Hilinski, former quarterback for the Washington State Cougars, took his own life in January 2018. Brothers Ryan, Tyler and Kelly were extremely close and always consulted each other for football advice. They all loved the game of football.

Despite the tragedy the Hilinski family suffered, their goal since has been to remember and honor Tyler with every ounce of energy they have. They also continue to strive to help others who might be suffering mentally in silence.

One of the big steps in this was the creation of the Hilinski’s Hope Foundation.

“Tyler was never diagnosed or treated for any disease but through his suicide we understand that he was suffering in silence,” the foundation’s website says. “We will fund programs that provide assistance to many that are struggling, and promote educational awareness to the very real problem of young person(s) suicide and provide hope for those who need it most.

The foundation originally began in California "as early as Tyler’s memorial," according to his father, Mark Hilinski.

In the process of preparing for the memorial, the Hilinski family did not want Tyler’s death to be in vain, so they started to build upon an idea, soon to be known as Hilinski’s Hope.

At that time, Ryan and Tyler’s oldest brother, Kelly, had in his Twitter account bio, “They say you die twice: Once when you take your last breath, and the last time when someone says your name for the last time.”

The Hilinski family did not want Tyler to die twice.

Mark Hilinski said the family received help from the Washington State team, fan base and community to move one step forward at a time. Hilinski’s Hope was officially born.

“The mission there is to continue to honor Tyler by raising funds, and providing the education, the awareness and reducing the stigma around mental illness for student-athletes’ best shot at mental wellness,” Mark Hilinski said. “We’ve been doing that ever since.”

When the Hilinskis moved to South Carolina for Ryan to go to school and play football in Columbia, the support from the Gamecock fan base and community did not disappoint.

“It started with the state of Washington,” Mark Hilinski said. “They picked this up, and it feels like South Carolina in general has almost adopted us — and welcomed us with open arms to come and be here ... the amount of support and love we’ve gotten from everybody ... it’s overwhelmingly positive, and we couldn't be more grateful.”

Back in January, Ryan Hilinski was seen distributing Hilinski’s Hope wristbands in the student section at basketball games. The wristbands have the No. 3 on them, which isn’t just a number to the Hilinskis.

No. 3 is Ryan’s current jersey number, but it was also Tyler’s number at Washington State.

Kelly and his younger siblings began to wear No. 4 when playing sports to honor their late grandmother, Linda, who passed away from Lou Gehrig’s disease. Gehrig, a former professional baseball player, was No. 4, so they wanted to honor their grandmother by wearing Gehrig’s number.

Tyler grew up playing as No. 4 in high school, but the starting quarterback for Washington State at the time had the No. 4 jersey when Tyler enrolled at Washington State. Tyler made No. 3 his own.

After the starting quarterback graduated, it was Tyler’s turn to lead the team. He discussed with his mom, Kym Hilinski, about changing back to No. 4, but the family told him he was No. 3 now.

Ryan, who was also No. 4 to honor his grandmother Linda, switched to No. 3 to honor Tyler after his death. No. 3 has stuck with the Hilinski family since. It is even used on the Hilinski’s Hope logo.

South Carolina and Alabama fans honored Tyler and all people suffering from mental illnesses at Saturday’s game in Columbia by standing and holding up the No. 3 on the first play of the third quarter.

In addition, the University of South Carolina Student Government has partnered with Hilinski’s Hope to host a mental health workshop on Nov. 3 from 10 a.m. to 3 p.m.

Student Body Vice President Sophie Davish wanted to do something with mental health as part of her campaign, and Hilinski’s Hope was the perfect answer.

Davish hopes for events such as the mental health workshop to continue every year, where student leaders work together with programs such as Hilinski’s Hope.

Many South Carolina fans, or college football fans in general, might ask why a student-athlete from California would choose to come all the way across the country to South Carolina to play football.

For Ryan Hilinski, the decision was a process.

The Hilinskis used to vacation in Hawaii a lot when they lived in California. When Kym’s mom passed away, they spread her ashes at a lighthouse along the Pacific Ocean in Hawaii.

“[Ryan] came to us and said, ‘I think I’m going to commit to South Carolina,’” Mark Hilinski said. “We all wanted to be together, so we said, 'You know what, we're just going to sell everything in California and move out here to South Carolina to be with Ryan.'”

Hilinski committed to South Carolina in April 2018. This was also around the time that Kelly was graduating and was trying to attend medical school, so the family figured that South Carolina would be a good fit for Kelly as well.

Flash forward to August 2019: With Jake Bentley assumed as the starting quarterback to begin the 2019 season, the Hilinski family figured that Ryan Hilinski would redshirt the season while Bentley finished his senior season.

However, it was announced on Labor Day that Bentley suffered a foot injury in the last play of the season-opening loss to UNC in Charlotte and he would be out for at least six weeks. It was later announced that Bentley’s injury would require surgery, causing him to miss the remainder of the 2019 season.

The next man to be called upon to lead the Gamecocks under center was Ryan Hilinski, who won the backup job over Dakereon Joyner during fall practice.

Hilinski’s first start as a Gamecock came against Charleston Southern on Sept. 7. He completed 24 for 30 passes with two touchdowns and 282 yards. He led the Gamecock offense to over 700 total yards, setting a school record.

“Ryan at 18 has done ... such an amazing job of juggling the demands of being a student-athlete, moving to a new state, meeting new friends, coaches,” Mark Hilinski said. “And then carrying the burden of trying to be a team player, learning a new offense, being prepared to help his team. That’s not tough enough; you also miss your brother.”

No matter what the season has in store for the Gamecocks, Ryan will play for his brother Tyler and cling to the No. 3, as he did when scoring his first touchdown pass against Charleston Southern

“It’s a meaningful number to us for sure,” Mark Hilinski said. “Three has become, for us, the symbol of hope.”