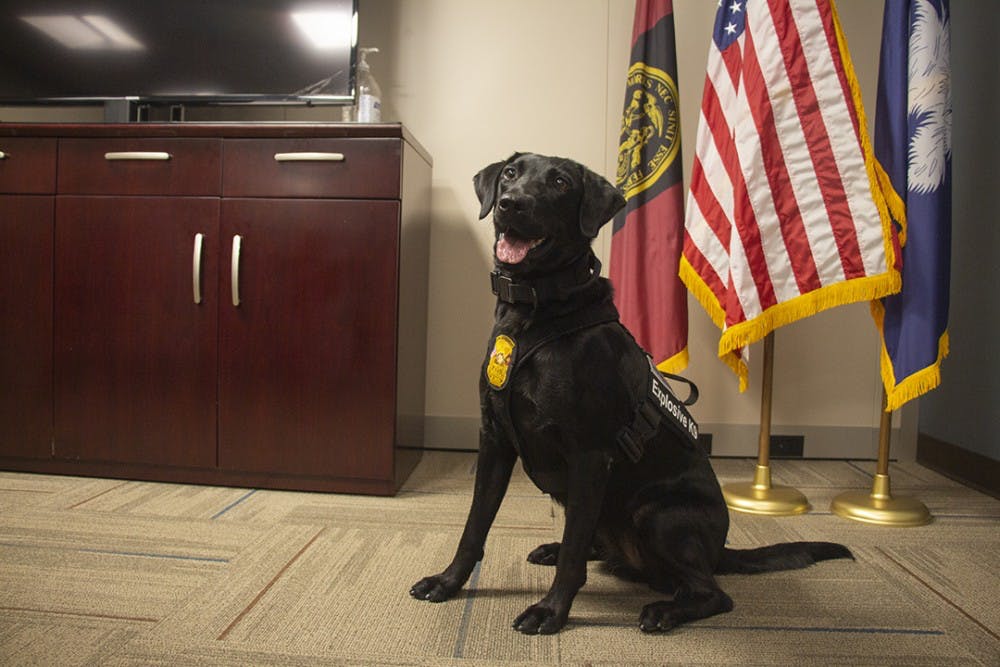 K-9s are dogs specifically trained to assist police and law enforcement, and K-9 units are common across the nation. However, Sherri and Poppy have a skill set that other K-9 units in South Carolina don't.

The program is the first K-9 unit of its kind in the state, so it had to be built from scratch. Lt. Scott Ellis, head of the K-9 unit, felt there was a need for a K-9 program that could assist with security sweeps at large events, a task that was previously done with help from other agencies.

“The dog walks behind people, and they will actually smell the odor that you leave as you walk past,” Ellis said. “If the dog smells an explosive odor, or the odor of a firearm, they’ll follow their nose up to that individual and then alert the handler."

The dogs worked the NCAA Basketball Tournament, First Night Carolina and are currently preparing for the fall football season. Cpl. David Griggs, Sherri’s handler, said USC's unit goes above and beyond traditional dogs, who have to acclimate before getting into the mindset of working. The dogs are trained to know that if they find an explosive, they will receive a toy or reward.

“Sherri has been trained to be very independent," Griggs said. "Even if we weren’t doing a search, and we were just walking through a building, if she was to detect an explosive, just in the air, she would know that, ‘Oh, if I find it, I get my toy.'"

The company that handles the training of the dogs, Vapor Wake, train dogs in places such as Disney, Amtrak and the Transportation Security Administration. The dogs first undergo a genetic screening at a young age, then eight months of training in firearm and explosives detection and socialization. After getting certified, the dogs are assigned a handler and go through seven more weeks of training before going out into the field.

Griggs said Sherri is highly motivated and is told when to start working through the use of equipment and auditory and visual cues.

“When we tell her the word, I'm not gonna say it, S-E-A-R-C-H, if she hears that word she will freak out and start smelling everything,” Griggs said.

Arina Lomoff, a second-year biochemistry student, first learned about the K-9 program when she saw the dogs patrolling the South Carolina State Fair.

Outside of working events and training, Sherri and Poppy do security sweeps at campus facilities and are on-call to assist with any emergencies that arise. The dogs also take part in campus outreach activities with the Bomb Prevention Unit and can be found giving presentations alongside police officers.

Griggs said the most rewarding part of being Sherri’s handler is being able to interact with her throughout the day.

“She goes into regular dog mode, and we go on lots of runs and walks," Griggs said. "When I come to work, she just hops in the backseat and comes with me and we get to hang out all day, so she’s with me all the time."