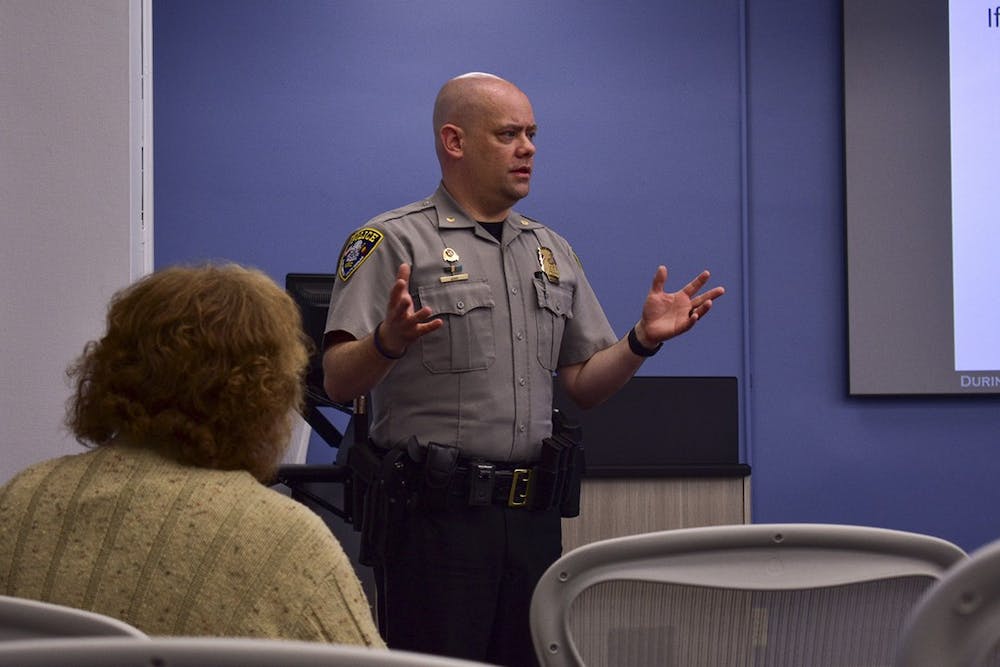 One person dies every 15 seconds, on average, during a mass shooting according to Major Irick "T.J." Geary. At USC, the average emergency response time is around two minutes. Theoretically, if there was a mass shooting at USC, approximately eight people would die before law enforcement enters the scene.

Geary is the operations bureau commander of the USC division of law enforcement and safety (LES) and taught a "Responding to an Active Shooter" seminar in the Thomas Cooper Library Tuesday afternoon.

Geary said it is important to develop an emergency plan. He said students should keep it simple and handy.

In the event of a mass shooting, students should remember ADD: "Avoid the suspect/incident," "Deny the suspect entry into your area" and "Defend yourself using whatever means necessary," according to Geary's presentation.

“Until we stop the shooter, we’re sitting in a boat taking on water,” Geary said. “If we do anything but plug the hole, we’re all going to sink.”

He said students should remember to call 911 and provide descriptions of the location, suspect(s), type of weapons in use, number of victims and types of injuries.

“The quicker that you can respond, the better off you are,” Geary said. “I can tell you that if you sit and you wait your turn, if you comply, you probably will die. If you do something ... then you will increase your odds of surviving.”

“If you make a plan, you can carry out that plan faster than you can creatively come up with that plan under stress,” Geary said. “It’s important that we do our planning when we’re not stressed, and that we do our action when we are stressed.”

If a shooter is within fighting range, the victims should use factors of shock and awe to distract the shooter and make them flinch, according to the LES presentation. While they are flinching, students should take advantage of weapons of opportunity and swarm the shooter with as many people as possible.

“You’re dealing with somebody who is in all likelihood probably planning to die — and they’re coming in with absolute commitment to ... finishing out this mission,” Geary said. “This is really something you have to commit to when you prepare yourself for it. It's not, you rarely rise to the occasion; we rise to the level of our preparedness.”

Executive assistant for the department of military science and army ROTC Latrell Robinson said she felt better prepared after attending the seminar.

“I’ve just never attended any type training like this before, and I was just curious to see,” Robinson said. “This was really good information … I feel it's something that I could apply wherever I was.”

“I do feel pretty safe where we work, but I do feel more confident now, having had this training to be in charge of my actions,” Brown said. “I feel more comfortable and calm. Should this happen, you know, I know what to do.”

Geary said there are steps the USC community can take to try to prevent a mass shooting from occurring.

"In order to win, we’ve got to intervene at some point before somebody walks into a room with a gun,” Geary said.

He encouraged members of the USC community to visit the Behavioral Intervention Team’s website if they are concerned about a peer or individual for any reason.

“How we treat people matters,” Geary said. “If we don’t treat people with respect, if we demoralize people and kinda help feed a grudge or this revenge-type motive, a lot of times that ends up being one of the preceding issues to workplace violence.”