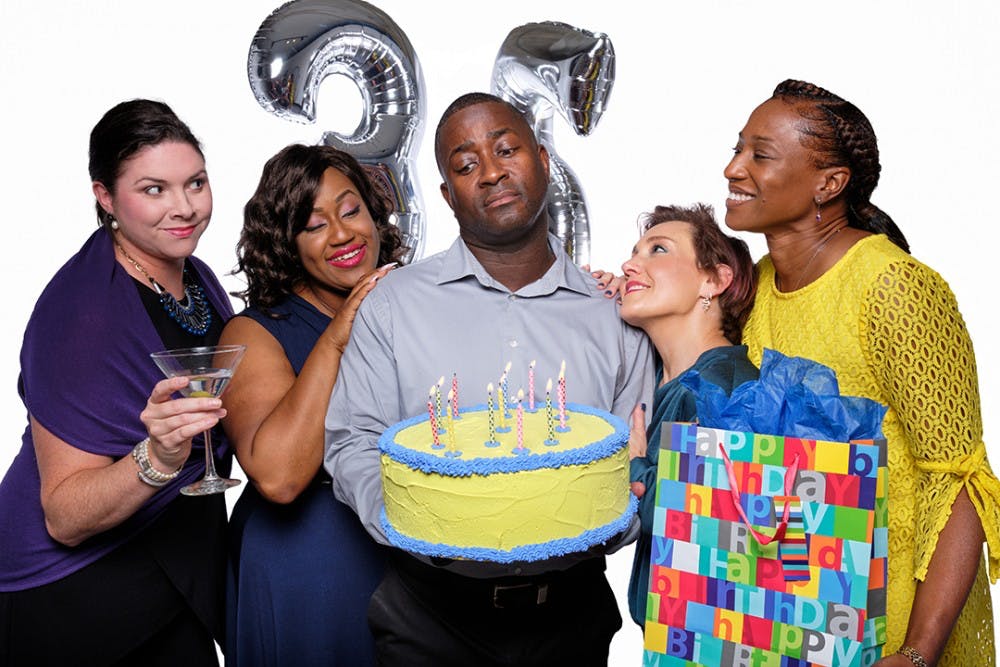 Trustus Theatre is celebrating 35 years in Columbia, and what better way to celebrate than adapting one of the most lauded musicals of the '70s?

"Company" is a 1970 smash Broadway hit, the book written by George Furth and the music and lyrics by Stephen Sondheim. Out of its previous record-setting 14 Tony nominations, "Company" won 6 at the 1971 Tony Awards.

The storyline follows Robert, a single man on his 35th birthday played by Walter Graham, and his five married couple friends. The musical is composed of short vignettes all concerning little anecdotes about relationships.

Originally set in the '70s, Trustus Theatre decided to modernize its current adaptation of "Company" by adding iPhones and incorporating technology where possible. Using two large screens on either side of the stage, lyrics flashed up in the form of text messages to keep in time with the rapid pace of the lead song "Company." As the couples danced around Robert in a frantic pace, their high-energy chorus lyrics popped up on both screens in rapid-fire.

When a couple would freeze to give spotlight to others, they would pose and take a selfie, which would show up on the screen. This allowed the focus to shift from one couple to another while still integrating the iPhones each character held in their hands.

Despite the innovative ways technology was presented, the modern update fell a little flat. Peter, played by Craig Allen, confides in Robert that he has no feelings for his wife, but rather a man. Peter replies by saying that type of relationship isn't supported in "today's" society. For the '70s, this might have been true, but today's culture is different, especially considering the story is set in New York City. The line was jarring and out of place with the modern update Trustus strove to achieve.

Despite the small challenges, "Company" still dazzled with its cast. Graham played Robert with every ounce of suave, ladies'-man charm the character desperately needed.

However, it was Amy, played by Brittany Hammock, who stole the show.

The ever neurotic bride-to-be who nearly gets cold feet sent the crowd into stitches with her song "Getting Married Today." Until "Hamilton"'s "Guns and Ships" in 2015, "Getting Married Today" held the record for the fastest verse in history with 68 words sung in 11 seconds, a challenge to which Hammock spectacularly rose. Her manic energy brought Amy to life in the most wonderful way.

Another audience favorite character was Joanne, played by Sheldon Paschal. With her sarcastic performance of "The Ladies Who Lunch" and sharp tongue, Paschal had the audience hollering in delight. "The Ladies Who Lunch," a song about the rich women who seemingly do nothing with their lives, is Joanne's enduring run-away classic number from "Company."

If you take one thing away from the show, it's to find love for love itself, not for anything else. Don't be pressured into a relationship if you don't truly want it, as Robert begins to realize it over the course of the play.

Overall, "Company" by Trustus was a wonderful adaptation to the Broadway classic. No matter your disposition to romance plots, anyone can find "Company" an enjoyable story with a sweet theme. If you don't, Joanne put it best: "Kiss off, Rodney!"

Take a friend or partner and go see the show that runs until Oct. 26.