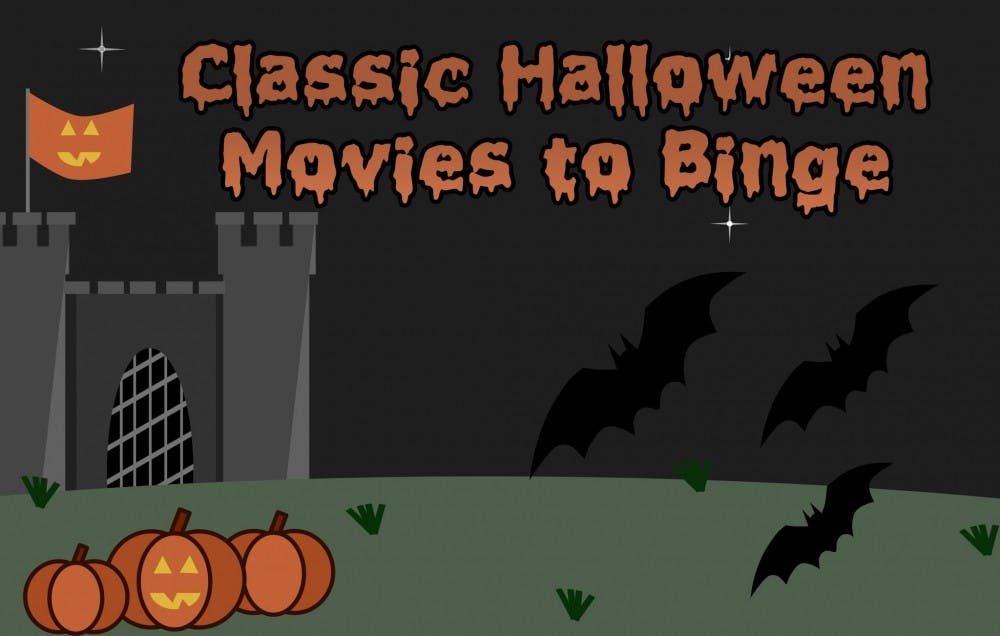 It's that sweater-weather time of year again when pumpkin spice becomes the rage, corn maze pictures fill your Instagram feed and horror is the film genre of choice. To get in the spooky season mood, here are some classic Halloween films that are perfect for a night of Netflix on the couch.

The children's film turned cult classic "Hocus Pocus" follows the Sanderson sisters, a trio of witches from Salem, Massachusetts. Three hundred years after the sisters' demise, they get resurrected on Halloween of 1993. With an all-star cast consisting of Bette Midler, Sarah Jessica Parker and Kathy Najimy, this movie is loved for the humor and hijinks it shows rather than typical jump scares and violence. Whether you've seen it once or a hundred times, this movie never gets old, so it's first on our list for binge-worthy movies.

A classic movie that broke ground by satirizing the horror genre, "Scream" became a cult classic for having a comedic tone, breaking the fourth wall and poking fun at other classics. The movie follows Neve Campbell's Sidney Prescott, a high school student who becomes the main target of Ghostface, a mysterious killer. Spawning three follow-up sequels, "Scream" is credited with renewing the horror movie industry. While the sequels never reached the level of buzz of the original, each movie has become a funny horror classic for those looking to avoid true horror. Scream's jokes remain funny year after year, making this a favorite horror-comedy.

Another children's movie, this stop-motion is the perfect fantasy/horror combo to curl up on the couch and watch. The 2009 film follows the titular character, Coraline, as she moves towns and discovers a parallel world filled with button-eyed people through a mysterious door in her new home. While the new world seems to be the perfect world Coraline was looking for, she soon realizes the button-eyed people are much less genuine than they appear. While it is labeled a children's movie, "Coraline" never ceases to spook the viewer watch after watch.

This 2010 supernatural horror film follows the Lambert family in their new home. The eldest son, Dalton, falls into a coma and becomes a portal through which demons can enter the house and attack the family. After supernatural figures continue to harass them, the Lamberts perform a seance on Dalton and realize he has the ability to astral-plane travel, an ability shared by his father. One of this movie's strengths is keeping the viewer on the edge of their seat, always anticipating the next scare, wondering what is going to happen next, which (spoiler) doesn't end even after the credits start to roll. A post-credit scene perfectly sets up the sequel, "Insidious: Chapter 2." "Insidious" is on the scarier side of Halloween movies, but the film has it all: Good scares, a good plot and a sequel for those who just can't get enough.

Our last film is another supernatural horror, inspired by "The Amityville Horror." "The Conjuring" follows Ed and Lorraine Warren, a paranormal investigator couple, and their clients, the Perron family, at their 1971 Rhode Island house. The Warrens discover the house was owned and has been cursed by Bathsheba, a witch from 1863 who is the reason for attacks on the family. "The Conjuring" is the first film in the extended universe consisting of the Annabelle series, the Conjuring series and the Nun series. If serious horror movies are more your cup of tea, "The Conjuring" and its related movies make for an excellent full-day marathon event.