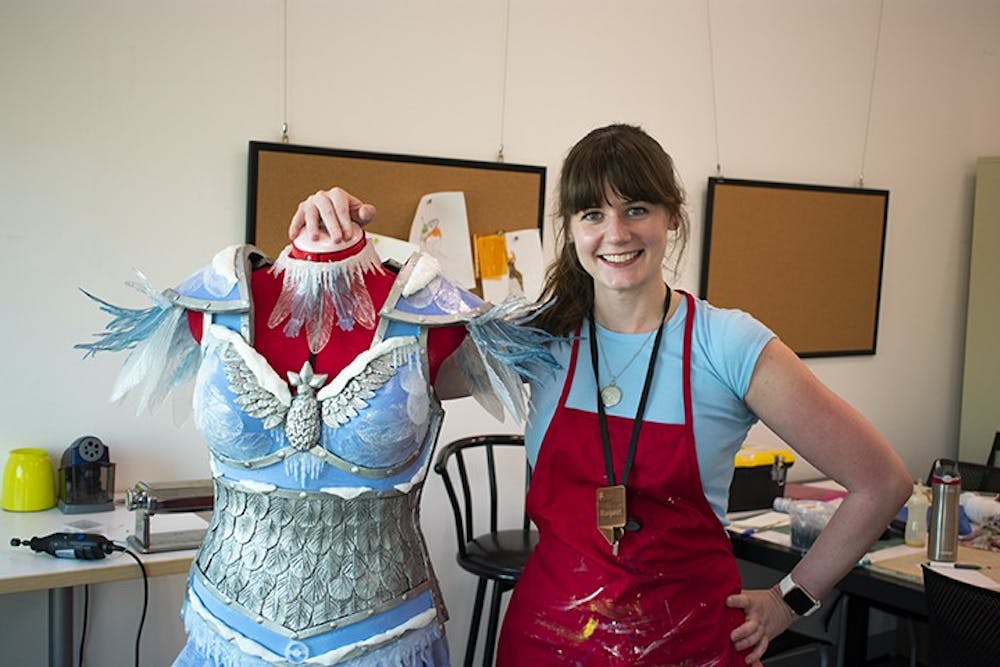 Margaret “Markie” Gaddis attended her first anime convention when she was in college. About a decade later, it’s safe to say the event has left a lasting impact on her. In her spare time, Gaddis can be found creating characters through costume designing in order to embody them at future conventions.

The phenomenon of costume designing for comic conventions, otherwise known as "cosplay," has been growing in America for dozens of years. The term cosplay was originally coined by Japanese writer Nobuyuki Takahashi after attending the World Science Fiction Convention in 1984.

While costume designing itself dates back to the ancient Greeks, cosplay is a relatively new movement in the art world. It is impossible to pin just one artistic medium to cosplay. In fact, that is why Gaddis has become such a big fan of it.

“I like to jump from thing to thing, which is why cosplay is very good for me, because it is technically one form of art, but I can do many different things within it,” Gaddis said, “[I can] jump from sewing to sculpting to painting.”

Gaddis is from a town near Simpsonville, South Carolina. She attended Winthrop University in Rock Hill, South Carolina and graduated with an English degree and a secondary education minor. While sticking around Rock Hill for a couple of years after graduating, Gaddis decided she did not want to be a teacher.

Instead, she set her sights on Columbia and applied for a job at USC. Currently, she is the executive assistant of the Office of System Affairs for the university, so she oversees communications between South Carolina’s various campus locations throughout the state.

During the day, Gaddis is just another USC employee, but on different weekends throughout the year she transforms into her favorite characters. Over the seven to eight years Gaddis has been involved in cosplay, she has created about 29 characters — that’s about four handmade costumes a year.

Having grown up watching the television show "Sailor Moon," Gaddis has always shown an interest in anime and comic book characters. However, it all became more real after she attended that first convention with her friends.

“Once you go there and you’re not in costume, you kind of feel like you’re missing something,” Gaddis said.

It was shortly after college that she made her first costume, Sailor Jupiter from "Sailor Moon." Gaddis entered the costume in her first competition and took home second place in the beginner’s category. Although she doesn’t compete anymore because it takes away time with her friends at the conventions, Gaddis still puts a lot of thought, work and materials into her costumes.

Despite the fact that getting started in the world of cosplay might be intimidating, Gaddis has managed to find her footing.

“This was back when there wasn’t as many resources online to really access, so I kind of looked for a little bit of sewing tutorials,” Gaddis said. “I purchased a dancer's leotard and some green fabric and kind of muddled my way through it.”

Her latest and favorite costume, Articuno from "Pokémon," is an example of the innovation and resourcefulness that can be utilized while creating for cosplay. The costume comes with a dress, sword, shield and armor-like boots. The skirt is made from curtains Gaddis dyed blue, the corset is made from EVA foam, the base of the sword is a lamp post and the icicles at the top of the sword are made from layered hot glue and LED lights.

Before Gaddis can start putting a costume together, she must figure out what costume to make. Gaddis said she usually gets inspired by the materials and different techniques she sees people posting on social media.

"I kind of come up with a design or find a character that will enable me to utilize those materials and techniques and just go from there," Gaddis said.

There are challenges throughout the artistic process, but Gaddis said spending money might be the hardest part. Alongside that struggle is the battle against gravity and physics. According to Gaddis, there are special parts to some costumes that are just too heavy and to better distribute the weight can be a daunting task.

Gaddis is currently working on a “Dandelion Lion” costume from "Alice in Wonderland" and has also sketched out an idea for a “The Very Hungry Caterpillar”-inspired costume.

When she is not thinking of or designing a new character, Gaddis can be found reading. Her love of reading is what led her to study English, work in a library for a couple of years out of college and ultimately accept her new position as artist-in-residence at the Richland County Library on Main Street.

Just in time for Halloween, Gaddis will be available to the public for questions and advice on costume creation from 2 to 6 p.m. every Saturday until Dec. 20 on the first floor of the Richland Library.

More information about this and other events Gaddis will be attending, including "Overdue: Curated for the Creative" and the "Not-so-Spooky Halloween Stroll," can be found on Richland Library's website.