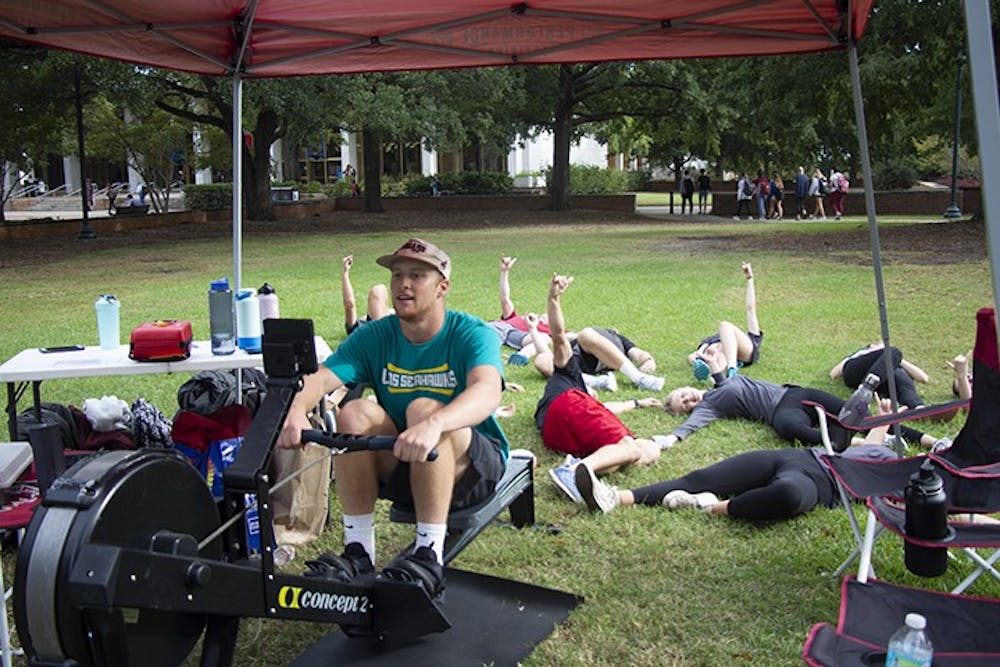 The physical therapy department hosted its annual 24 hour rowing event to fundraise and increase awareness of the field of physical therapy on Davis Field from Wednesday to Thursday as part of its Physical Therapy Day of Service.

“There’s a day in the month that physical therapists from around the world get together called the Physical Therapy Day of Service,” Reed Handlery, an exercise science doctoral candidate, said. “We literally took that as to be 24 hours of service."

“We’re going for distance, so currently when you're on there, you try to keep around a two minute pace, because that’s a good pace," Cooper said. "But we are trying to see who can row the longest in two hours."

This year’s fundraising event supported PAALS, a non-profit that provides service dogs for individuals who have disabilities or who are undergoing physical therapy.

“We’re trying to raise as much money for PAALS as humanly possible and raise more money for our charity of choice than [Medical University of South Carolina] or Anderson University,” Cooper said.

Makayla Scitt, a third-year physical therapy student, said there is strong student involvement behind the event in addition to support that they receive from local businesses and alumni.

“You typically have anywhere from three to six individuals rowing each hour, so you break it up in like, 20 minute increments,” Scitt said. “The whole program, first-, second- and third-years are involved, as well as anybody that walks by."

Scitt has undergone physical therapy herself due to injuries that resulted from her softball career through high school and college, which untimely inspired her passion for the field.

“In my tenth grade year, I had a pretty bad shoulder injury and my physical therapist helped me get back to pitching and playing the sport that I love; helped me reach my goals,” Scitt said. “I wanted to be able to have that impact on other people as well."

Cooper first became interested in the field of physical therapy as a result of a similar experience, as she received injuries though dance.

“[Physical therapy] allowed me to become not just a better dancer and heal from my injuries, but also made me a better, more fit person overall,” Cooper said. “I liked it had a positive impact on my life and my quality of life and I wanted to give that to others.”

“I get to work one-on-one with individuals who are in pain; they're trying to get back to something they want to do,” Handlery said. “As a profession, we’re really focused on movement, so we want to restore movement, get people back to moving, moving better and moving more, is essentially our goal."

Scitt said this event allows physical therapy students and the USC community to work together to achieve a common goal.

“In the healthcare industry, we all have to work as a team to accomplish a goal, and so, it's the same way out here today, because were doing this together,” Scitt said.