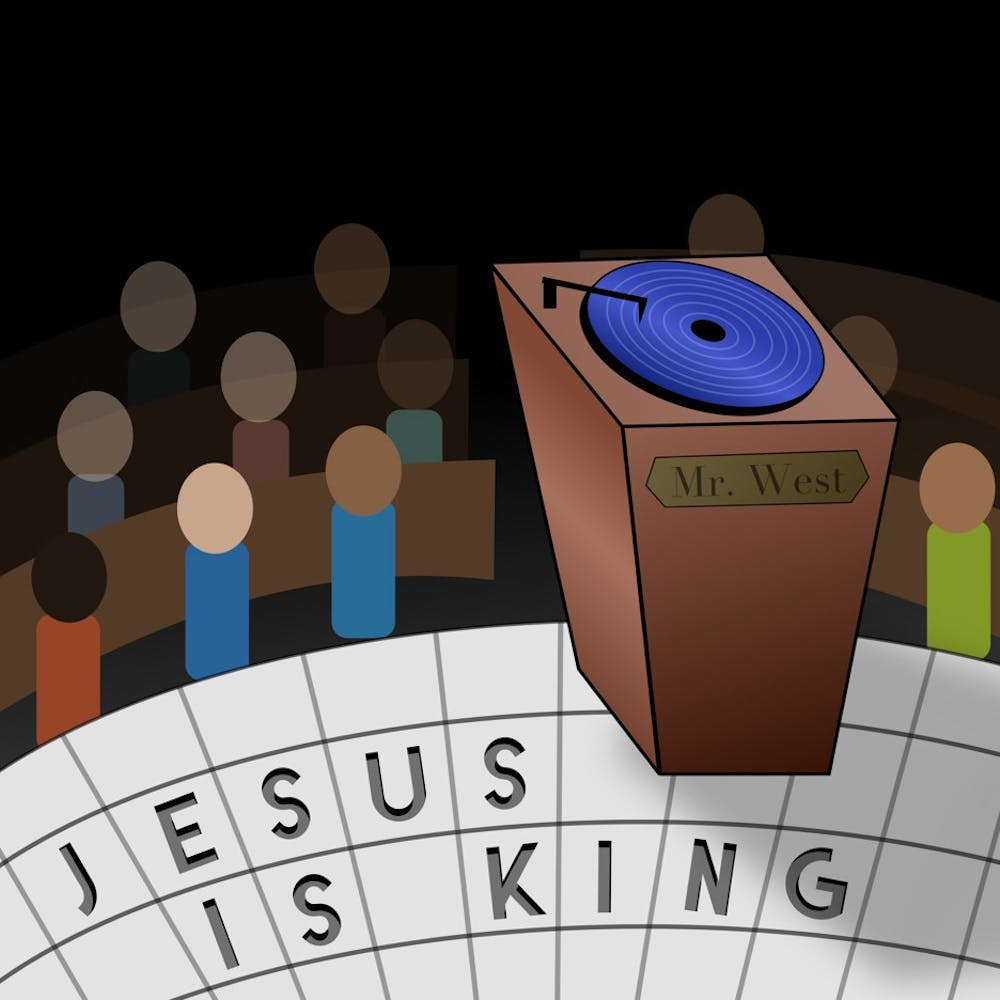 It’s more of a companion piece to his newest album. It's also a musical, an argument for faith and a showcase of talent. The 38-minute short film allows West to take the back seat and let his Sunday Service group take center stage and show their talent.

The movie opens with a completely black screen and the Sunday Service choir chanting “Hallelujah!” from West's new song “Selah,” louder each time before the screen pulls back to show the location the movie takes place, the Roden Crater which is a volcanic crater in Arizona. The overhead shot gives the sequence a feeling of divine presence. The opening sequence sets the tone going forward and shows off how well the movie looks and sounds.

Using the shooting methods from West's Sunday Service Coachella performance this year, the movie is shot through a pinhole lens, where the audience can only see what’s happening on screen through a little circle with the rest blacked out.

The director, Nick Knight, uses this method of shooting to focus on the performers and create a sense of movement with mainly static shots. Instead of zoom-outs and zoom-ins, Knight opens up space from this limited view and slowly gives viewers more information.

Not every shot takes this stylistic approach, though, and it’s used to create emphasis on emotion and performance.

We see her sing and perform with a smile that stretches from one side of her face to the other, which can draw similar emotions from viewers by the end of the sequence. Knight slowly opens up from her face as the performance becomes more energetic and we get a wide shot of the whole performance, as if the screen couldn’t contain all the emotion and energy and it had to expand to a bigger canvas.

It’s after this sequence where we first see West, in the last 15 or so minutes of the film. His presence at first is tiny, with him standing there and listening to the Sunday Service choir perform. This sequence is emotionally charged as certain performers break into tears and eventually start hugging each other at the end of the performance.

The final two sequences of the film are where West chooses to bare himself emotionally. West starts by performing a gospel version of his song, “Street Lights,” from his album “808s & Heartbreak." The song's lyrics say, “Seems like, street lights glowing happen to be just like moments passing in front of me, so I hopped in the cab, and I payed my fare. See I know my destination, but I’m just not there.”

Although West changes the last line to “And God took me there,” giving new context and adding a different meaning to the song that strengthens the film’s overall message. It brings the arc of West's career from “808s” to a close in a satisfying way that lends its emotional weight to the movie.

The final scene in the film shows West holding his newborn son, Psalm West, as he sings “Use This Gospel” from his new album. This gives the film a thorough line of family that concludes on a hopeful note, looking towards the future. The film makes its strongest argument for the power of faith and the power it can have in people’s lives in these two sequences.

It's not a movie for everyone, of course. It's too short for it to truly be great and leaves the viewer wanting more by the end of it. The pinhole style of shooting can be grating to viewers accustomed to normal shooting practices.

The movie also doesn’t explore its themes much, letting the music and singing do a lot of the work. Perhaps the biggest flaw of the movie though is its reluctance to come to terms with the person whose name is in the title. After a year of turmoil, and a career filled with even more controversies, this film doesn’t do enough of showing its audience where West is at this point in his life and career, and can leave some who aren’t already fans still wondering.