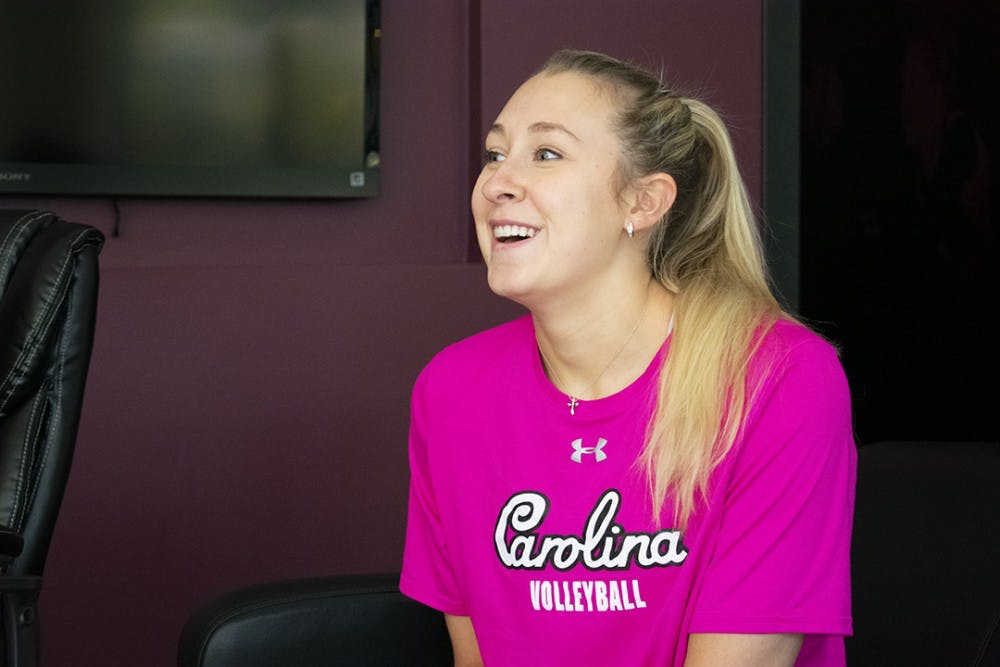 Although every student-athlete is locked in during games, some players find themselves getting loose and having fun before games with their teammates. That is the case with senior middle blocker volleyball player Claire Edwards and teammate Mikayla Robinson.

“Me and my teammate Robbie, we make TikToks,” Edwards said. “We make the TikToks before every game. It kind of loosens us up and gets us excited.”

Being from the Columbia area made South Carolina a more appealing choice for Edwards, but it was not the only deciding factor.

“I really felt the most comfortable here with the girls and the coaches,” Edwards said. “I really wanted to help the overall program, too.”

“She was really helpful,” Edwards said. “She told me about her experience and how great of a time she had, which really kind of helped me make my decision, too.”

Edwards did not waste any time helping the South Carolina team her freshman season. She made 16 starts and played in 26 matches. But playing a big role did not come without any adjustments a typical freshman student-athlete would have to make.

Edwards said her biggest adjustment was learning how to balance time with her busy schedule. She said the pace of the game is much faster in college.

“Having a weightlifting schedule, a class schedule and a practice schedule; in season it’s even harder,” Edwards said. “It helped me a lot coming in a semester early and graduating from high school a semester early, so that I could get that adjusted feeling that I needed.”

Going into her junior season in 2018, Edwards had in her mind that she needed to step up and play a bigger role than she already had been to help her teammates and coaches.

Edwards made the necessary adjustments, and in her junior season, she set career milestones. Edwards set her own personal records for most kills in a season (184) and most blocks in a season (78).

With Edwards’ successful junior season, the Gamecocks also experienced a head coaching change: Former head coach Scott Swanson was replaced with Tom Mendoza beginning in the 2018 season. Despite this challenge, the team was determined not to let it shake them and stay true to who they are.

“We stuck together, and I think that was the most important part for us, is knowing that we had each other no matter who was going to come in,” Edwards said. “Once Tom came, I think it was a big sigh of relief.”

Sticking together under a new head coach led to the first NCAA tournament appearance in 16 years for the South Carolina program, something Edwards and her teammates will never forget.

“I think it was a stepping-stone for this program,” Edwards said. “You know, now we have a higher standard for ourself and expectations, and we expect to continue that from years on, even after the seniors graduate.”