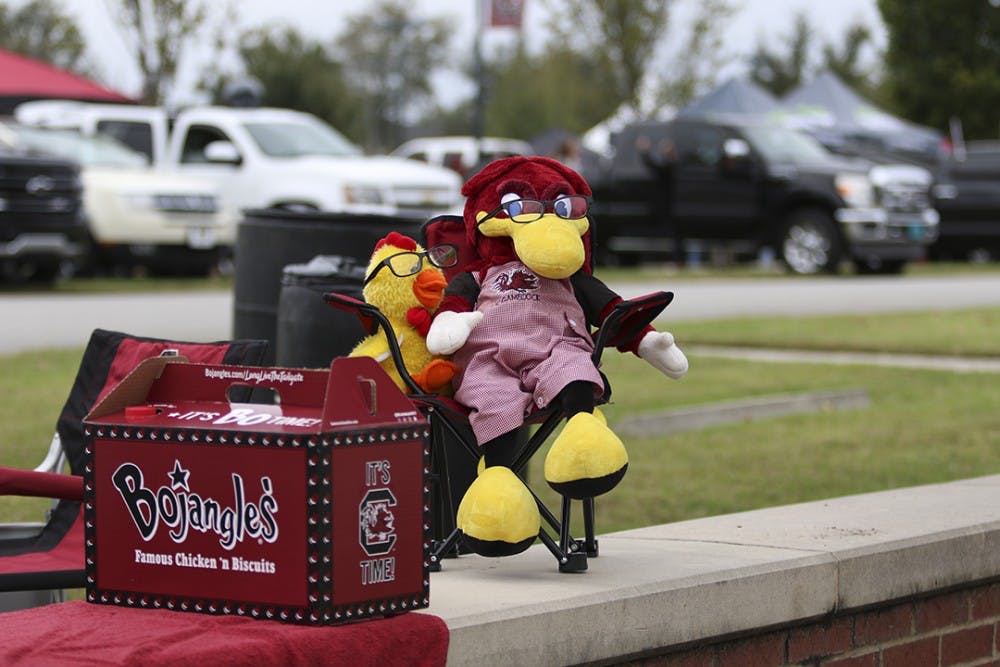 Tailgating in Columbia is rooted deep within Gamecock tradition

Tailgating on a Saturday in Columbia is one of the most celebrated traditions at the University of South Carolina. Students, friends and families gather at Gamecock Park, the Fairgrounds, the Cockabooses, Seawell's, Memorial Tailgate Lot and the Fraternity Lot to prepare for cheering on their Gamecocks at Williams-Brice Stadium.

For many, tailgating is rooted in family history. Gamecock alumni pass the tradition down from generation to generation, as some have been tailgating long before Gamecock Park was built.

Tony Hill, who graduated from South Carolina in 1974, is one such fan. He has been a member of the tailgating crowd at Gamecock Park long before it opened for the 2012 football season.

"Before that, it was the Fairgrounds," Hill said of his game day tradition.

Hill and his family have to make an extra effort to get their game day site set up for the noon kickoffs at Williams-Brice.

"We like to get here at nine to avoid the traffic," Hill said.

With the State Fair in town this weekend as well, there was plenty of traffic to be avoided on Saturday.

As for how Hill — donned in his garnet vest and Gamecock dotted khakis — felt about noon kickoffs, he had only one word to say.

While many fans who tailgate outside Williams-Brice are students or alumni themselves, many adopt their passion for the Gamecocks through family.

"We were at the market for 20 or 30 [years] and here since they had started it," Columbia native Tammy Coggins said of their current tailgate spot.

While Coggins herself isn't a graduate of South Carolina, her family has been a part of the university for a long time.

Coggins' passion for the Gamecocks was passed down to her through family, and she has a unique way to carry on a similar role, through a stuffed animal named "Baby Cocky."

Baby Cocky, the stuffed chicken who had his own seat at the tailgate and Will Muschamp-esque reading glasses, has been taking pictures with fans at the Coggins' tailgate for many years, including a picture with Will Muschamp himself.

"I'm working on a book for my family, my grandson especially," Coggins explained, with Baby Cocky sitting close by, to display the history of their tailgating to her grandson.

She plans to have pages dedicated to pictures of the stuffed animal with opposing fans to show her grandson as he grows up a fan of the Gamecocks himself.

Coggins had plenty of opportunities to take pictures with Florida fans on Saturday. As the sea of blue and orange that took up a fraction of Williams-Brice for the game indicated, the Gators traveled well to Columbia. Many Florida fans joined the fun in Gamecock Park with tailgates of their own.

Ben Wood was one such Florida fan, who was tailgating beneath a huge Florida tent.

"It's great, one of the best," he had to say of the South Carolina tailgate.

Wood has been to the Gamecock tailgate 20 times, as he claims it as one of his favorite tailgates. One reason for his love of Gamecock Park is the warm welcome he gets from Gamecock fans.

The only aspects Wood wasn't a fan of was the kickoff time — as was the consensus with most tailgaters — and having to face the Gamecocks in the rain.

"With the rain, Carolina's favored, I would say."

Wood ended up being wrong about his team, as the rain wasn't enough to hold back the Gators from stealing a win in Columbia. While the crowd at Gamecock Park may have been a bit thinner than normal, the weather couldn't stop some of the most loyal fans in college football from Saturday tailgating.

While the Gamecocks weren't able to pull off an upset this week, it certainly won't deter the Gamecock faithful from their tailgating habits anytime soon.