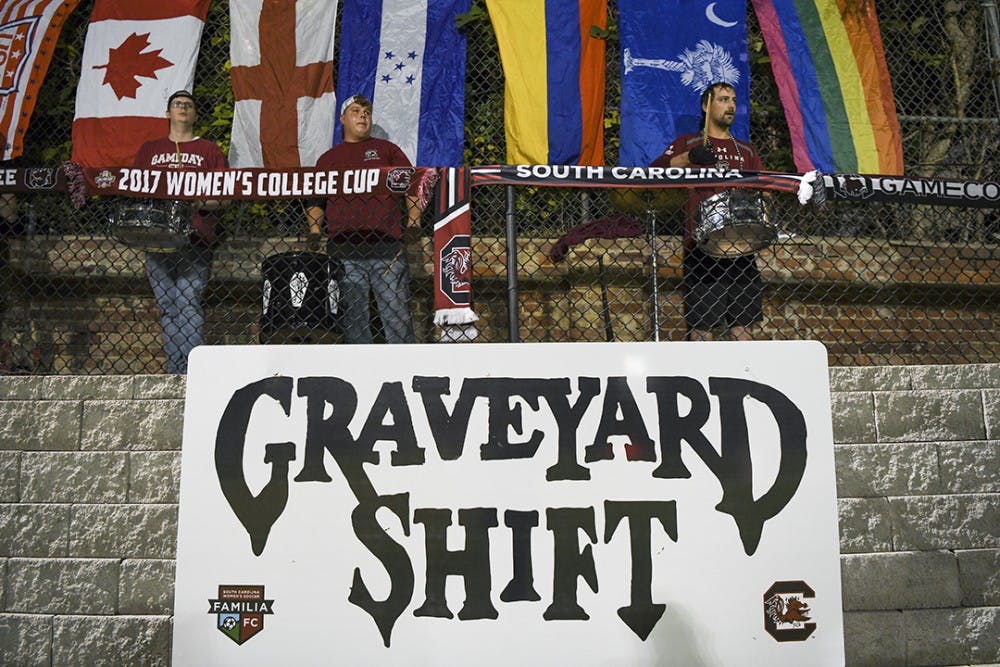 Usually, sports are considered to be visual spectacles, but when the South Carolina women's soccer team takes the field at Stone Stadium, there is an audible element as well. This takes the form of the crowd-favorite hype group Graveyard Shift.

Michael Layer, a graduate journalism student, Alex Dingman, an avid soccer fan and an ever-increasing number of other members have been bringing their energy and encouragement to the sidelines of women’s soccer games for the last few seasons.

Originally, they used vuvuzelas, cone-shaped noise makers typical to soccer matches worldwide, which were given out to season ticket holders. The group continued to use the vuvuzelas, then incorporated trash cans for making more noise and, more recently, use drums as their instrument of choice.

“We started coming to games in 2015, and we enjoyed the games and wanted to just do more to provide for the atmosphere,” Dingman said.

The name Graveyard Shift originated from the graveyard that resides in close proximity to Stone Stadium. The group has a permanent spot set up across the field from the stands, in the standing-only section of the stadium, which is, incidentally, the spot closest to the graveyard. This spot means the group has rarely had noise complaints.

“Jacksonville University asked us to move earlier this year," Dingman said. "We were too close to their broadcasters and they actually asked us to stop playing altogether, and we just kind of laughed and said, ‘We’ll go stand on the other side of the stadium.’”

The group freestyles all of their drumming pieces. Dingman said whenever someone new joins, they're told to make some noise and follow along.

“I don’t think we’ve ever practiced," Dingman said. "As far as a group practice, we’ve never done that.”

Layer said the team does "all the hard work," but Dingman said he thought the band had a "positive impact" on games.

“From what we’ve heard from the players and, you know, friends and family of the players, they seem to play harder, I guess, when we’re there and drumming," Dingman said.

This appreciation for the team is something the Graveyard Shift members have in common.

“You can see, game to game, depending on the opponent, how we will change things,” Dingman said. “It's really fun to watch this coaching staff.”

After several years playing at games, Layer and Dingman said they had some favorite moments, including senior night 2016 when they first brought the drums in.

Dingman said the band and everyone involved with the women's soccer team get along.

"The parents and the coaching staff and just all the staff of the women’s team, they have been so nice," Dingman said. "We've been met with open arms by them.”

Dingman said there was a "family atmosphere." Layer said the atmosphere added to the experience.

The Graveyard Shift will continue drumming on the sidelines of every home women’s game for the rest of the season, and for as long as they can.

“I wouldn’t miss these games for anything,” Dingman said.