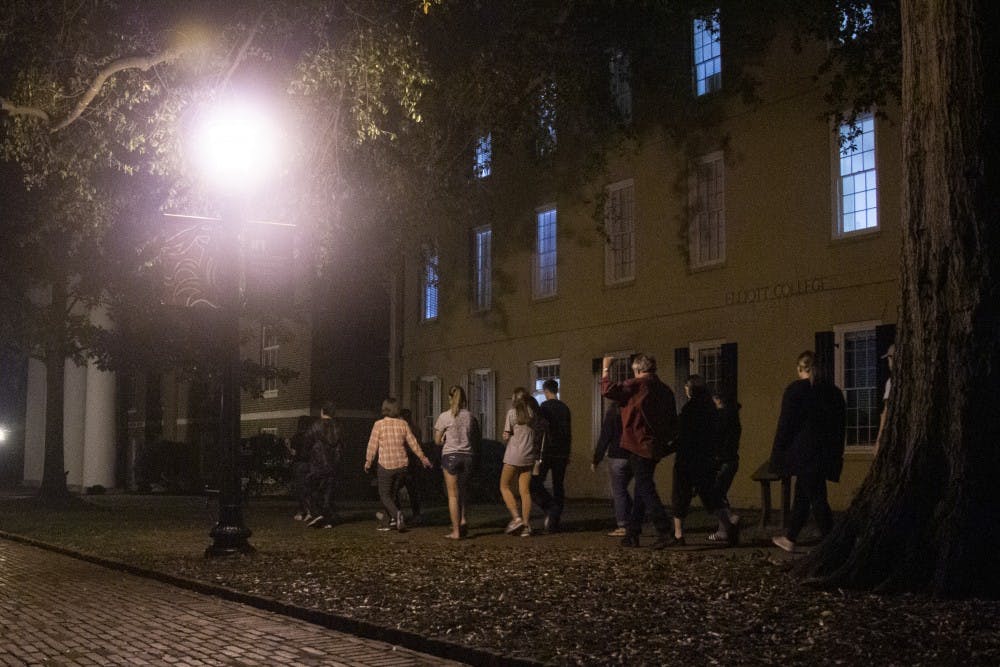 Dressed in costumes, university ambassadors led groups of students around the spookiest places on campus during  the 10th annual ghost tours on Monday night.

On the guided tour, the ambassadors highlighted spooky stories and urban legends that mostly occurred during the Civil War on campus.

Dylan Leatherwood, a third-year broadcast journalism student, said his love for history is intertwined with the ghost tours.

“I don’t think that a lot of people realize, with ghost stories, is how much history and how much involvement there is,” Leatherwood said.

Leatherwood said he believes ghost stories and ghost tours provide a huge learning experience to those that experience them.

Ambassadors also hid in unexpected places, playfully lying in wait to scare unsuspecting students on the tour, which caused occasional screams during the night. Leatherwood said it was one of his favorite experiences during the ghost tour.

Leatherwood said he enjoyed the student involvement in the ghost tours.

“It was really cool to see how it was put on by students and other faculty members, 'cause it really feels like a community involvement in it,” Leatherwood said.

Alexandra Martinez, a second-year elementary education student, became a university ambassador this year. This was her first time leading a ghost tour.

“I take the participants out to all the stops, and then a guide or storyteller tells them a ghost story,” Martinez said. “My goal is just to walk them around and make sure they don’t get lost.”

Keliah Bonnean, a first-year exercise science student, said seeing the participants' reactions on the ghost tours was her favorite part of the experience.

“When ambassadors pop out or when they’re screaming at the top of their lungs, it’s fun to see people twitch and turn back around and see all the things,” Bonnean said.

Martinez said she also loves the impact it has on her fellow ambassadors.

“I like hearing stories, and also seeing my friends dress up in make-up and scaring people — it’s pretty funny," Martinez said. "It's a good time."

Brittany Wilson, who works at the visitor’s center, said a lot of planning went into hosting ghost tours.

“We have two of our captains, who kind of oversee the whole process, and they really plan it from start to finish,” Wilson said. “They make sure that all the ambassadors are going to be here to get their make-up done, be in their spots, have different tour guides available. We have a script that they use, so they work with that."

Wilson said she believes the university ambassadors truly invest themselves in preparing for these special tours.

“It’s something that all the students love to get involved in. All of our ambassadors, they love to dress up, scare everyone, you know, tell all the fun urban legends of the campus,” Wilson said.