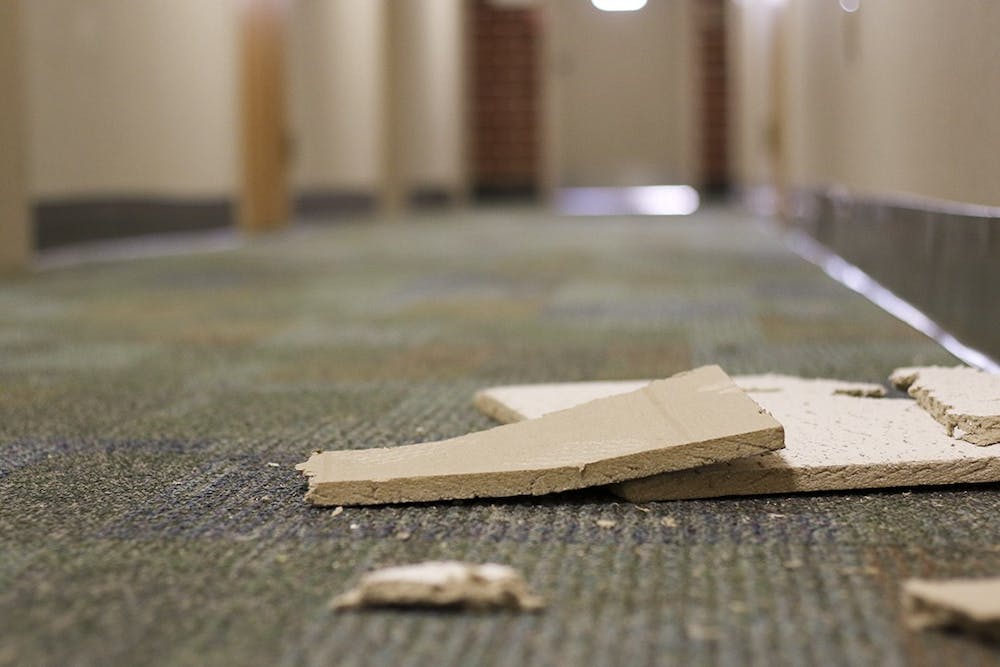 Students living in Cliff Apartments vandalized parts of the residence hall, including an elevator and its buttons, a glass door, wallpaper and ceiling tiles, following the news of their upcoming forced removal in the spring due to the university's Campus Village project.

“It’s inexcusable to engage in vandalism of any kind and we expect students to respect university property and the property of others,” university spokesperson Jeff Stensland said in an email interview.

Jordan Beaulieu, a first-year business management student, and Patrick Curley, a first-year finance and accounting student, said they didn’t know anyone who was participating in the vandalism, but they both felt it was prominent throughout the building. Most of the ceiling tiles on the ninth floor were gone, and the wallpaper on the second floor was ripped halfway down the hallway, according to the pair.

“Some of them are going a little bit too wild,” Beaulieu said. “They think that since it’s getting destroyed that they have a right to destroy it, but I honestly — I see why the university is not condoning it. Because if someone gets hurt, it’s going to be the university’s liability.”

Ashton Courtney, a first-year public health student, and Emily Peterson, a first-year sport and entertainment student, are living together this semester at Cliff Apartments. They said students refer to people who vandalize the building as the “demolition team," and one floor is responsible for most of the damage, based on messages in a Cliff Apartments group chat.

“It’s kind of annoying. I mean, will I chuckle at it? Yes,” Courtney said. “When we’re about to move out, go wild. I don’t care. If it gets approved, go wild. But right now you’re fighting so hard to get us to stay, and you’re going to tear it apart. It’s just frustrating right now.”

Some students have been circulating memes about their experience of being forcibly removed from Cliff Apartments.

Peterson said at one point she came out of her room in the middle of the night to see students running down the hallway with hammers. Beaulieu said the vandalism felt ridiculous.

“They’re also still maintaining it, so all that stuff they had to fix” Curley said. “They’re causing more work for people who had no or any effect on what is going on.”

Stensland said students who are involved will be sent to the Office of Student Conduct and face fines from housing.

“We are still assessing the damage that has occurred so far, but it is a possibility that a communal fee could be imposed,” Stensland said. “To avoid that, we encourage students to hold one another accountable, and if they see someone damaging property, to please report it.”

Hannah Boyce, a first-year broadcast journalism student, is the president of Cliff Apartments and a Residence Hall Association (RHA) senator. Recently, she received an allocation from the RHA for student sweatshirts, and she is currently planning an end of the semester celebration for her fellow residents. She hopes to tie-dye t-shirts, have a color war and with tentative permission from housing, allow students to spray paint their names on the side of the building.

“The vandalism doesn’t reflect who we are as Cliff,” Boyce said. “We’re just really passionate residents, and I hope people can start fueling their emotions in a more positive way. This celebration is for that.”