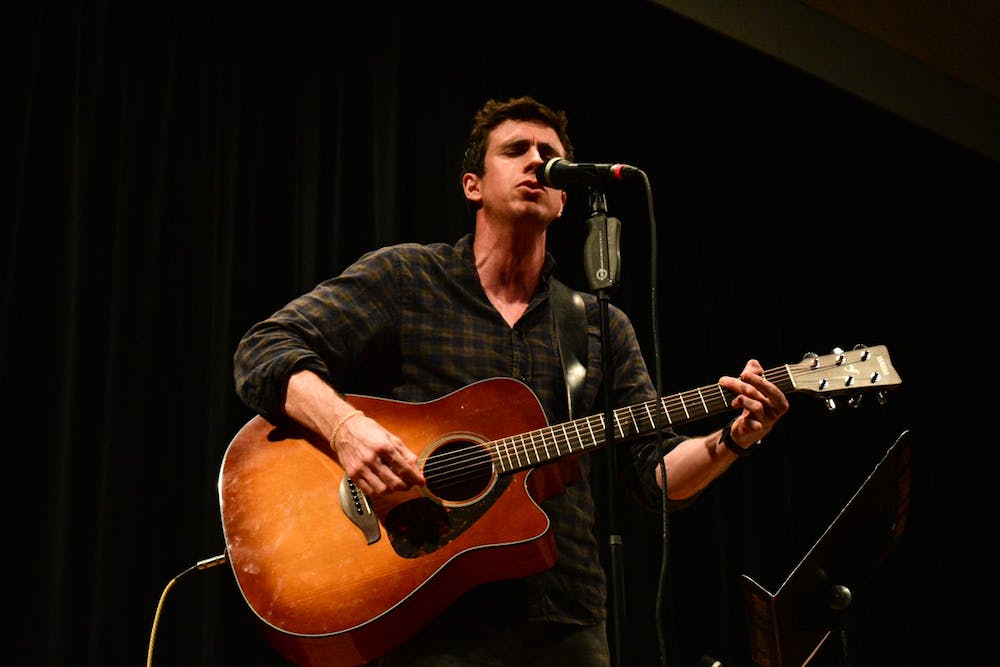 Musical comedian Jon Fisher took the stage in the Russell House Theater Wednesday night to sing about bad Craigslist roommates, being a server in the food industry and how he's not sad, just single.

Carolina Productions brought Fisher, who has shared the stage with the likes of Sarah Silverman, Hannibal Buress, Iliza Shlesinger and more. Fisher regularly incorporates music into his set.

"If we're just reaching for the stars and I'm patting myself on the back very hard, I would say [I'm] some kind of blend between Bo Burnham [and] Flight of the Conchords," Fisher said.

Fisher described getting into musical comedy as something he fell into. Coming back home to Los Angeles after college at the University of California, Berkeley, he tried to make a career in acting and then got into stand-up comedy. He said he was quickly burnt out from traditional stand-up, so he began incorporating music.

"I started pacing around my apartment with a guitar, trying to make some bits work," Fisher said.

Fisher's Wednesday night set consisted of half-songs and half-stories that poked fun of his own life or any grievances he has. One song was about working at Dave and Buster's and serving a friend from high school, who is now a doctor. Another story included having a standoff with an army of raccoons who were after his trail mix while camping in Yellowstone at 3 a.m. Each bit had the audience howling.

Throughout his stories, he interacted with the audience, playing a game called Mashup. The premise is simple enough: Anyone who can name the title or artist of the most songs or whoever has the best dance reaction or singalong wins a prize.

Lauren Hodges, a second-year computer science student, was one of these winners, going home with a bag of flaming hot crunchy Cheetos.

She received Carolina Productions' weekly promotional email and decided to give Fisher a try with her friend Mason Williams, a second-year mechanical engineering student. Hodges didn't know what to expect going in, but in the end she enjoyed the event.

"I liked all of it honestly; just anytime he was moving his body in weird ways," Hodges said.

Fisher's physicality and stage presence were hits with the audience, as he danced around and had several freeze-frame moments.

Williams said his favorite part was the grand finale.

"I like the confetti, because that means he was holding confetti in his pockets while he was doing everything else and just waited until the last bit to throw the confetti out of his pockets," Williams said.

Fisher pranced around the stage for his last act, talking and interacting with the audience while living his dream career as what he calls a "motivational celebrity DJ." In between techno beats, rainfalls of confetti and silly string, he implored the audience to have fun and follow their dreams.

The show was a high-energy end to Carolina Production's Fresh Faces comedy shows this semester.