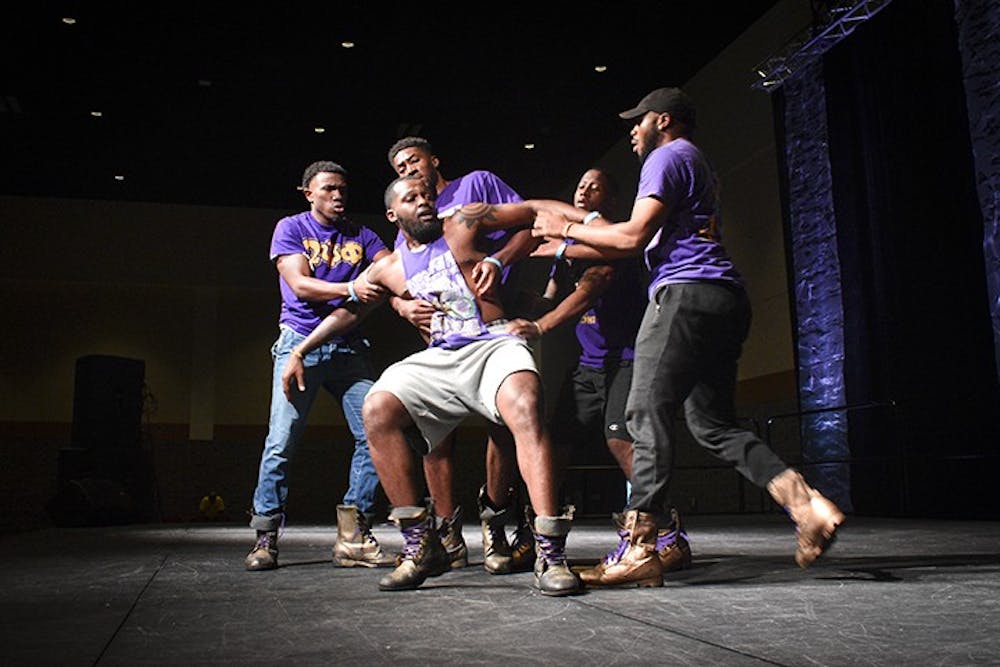 The National Pan-Hellenic Council (NPHC) celebrated Halloween by hosting a horror themed version of its annual step show. The show took place at the Columbia Metropolitan Convention Center and was a part of USC's Homecoming celebration.

The NPHC is comprised of nine historically African American Greek letter organizations known as "The Divine Nine," and currently eight of these organizations are on campus. Dating back the early 70's, NPHC members have traditionally hosted step shows to showcase their organizations.

Stepping or step-dancing is a form a dance where the entire body is used to create intricate rhythms and sounds using precise movements combining footsteps, claps and spoken words.

"Slaves used to use this as a way to like keep cheerful moods while they were at work, they couldn't really communicate but through this," said Bishop

Fourth-year computer engineering student and Omega Psi Phi member Marquis Wideman said that stepping is important to historically African American fraternities and sororities because of its power to them together.

Alpha Phi Alpha member and second-year political science student Darius Stephens-York said that coming to the show is a beneficial way for people to understand the tradition and art of stepping.

"It's better to see it in person than to just look at videos, because I don't think you really get the camaraderie and the competition and the like the passion that a lot of people put into stuff like this," Stephens-York said.

First-year mass communications student Morgan Prioleau said that she came to the event because she wanted to see African American culture first hand.

"You don't see a lot of culture like black culture on like the actual campus and this is where everybody really comes out," Prioleau said.

"It's a lifetime commitment," said Owens.

The step show also serves as a competition where the winning fraternity and sorority receives a trophy.

"You get bragging rights, really that's what we want to do, talk junk on the yard," Brunson said.

Six of the Divine Nine organizations participated in the show with three sororities and three fraternities competing against one another.

The Alpha Kappa Alpha sorority kicked off the show with a routine that inspired by the movie "The Purge." Their routine focused on purging away inequalities and the members of the group wore masks similar to the ones seen in the film.

Following the Alpha Kappa Alpha was Sigma Gamma Rho whose routine was based on the movie "A Haunted House." Their performance focused on sharing the history of their organization.

The last sorority to perform was Delta Sigma Theta whose routine was inspired by insane asylums and members dressed up as hospital patients. Their routine was highlighted by a stunt that gave two members the illusion of levitation, a common horror trope.

The first fraternity that took the stage was Omega Psi Phi whose routine was based on the movie "Freddy vs. Jason." Their performance involved one member dressing as Freddy and another member dressing as Jason as their dance illustrated how members of the group escaped attacks from the two iconic villains.

They next fraternity to perform was Alpha Phi Alpha whose theme was based on Jordan Peele's  "Us."The performers were divided into two groups as "regular" Alpha members performed steps that were replicated by "clone" Alphas.

The last fraternity to perform was Kappa Alpha Psi and their routine was based on Michael Jackson's "Thriller" as members of the group donned leather jackets and imitated some of Jackson's signature moves.

The groups were judged on criteria such as creativity, crowd participation and complexity of step. The sorority winner was Delta Sigma Theta and the fraternity winner was Alpha Phi Alpha.