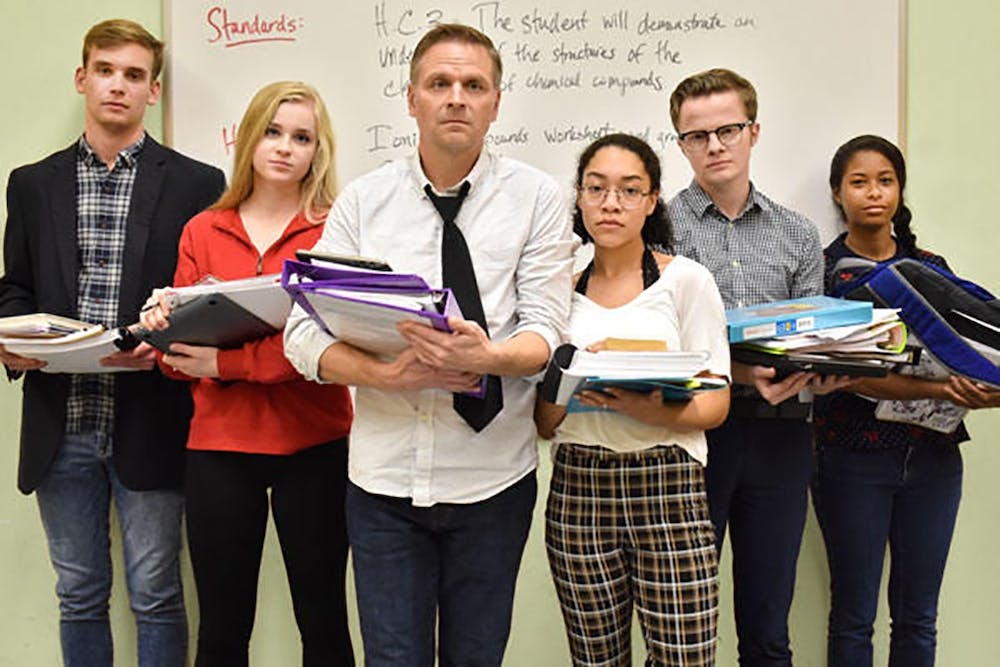 Courtesy of USC Department of Theatre and Dance

'ReformED' aims to take stance for all teachers, faculty

The original play "ReformED," based on the real data, statistics and interviews of teachers around the U.S., is hoping to continue the conversation about education reform after over 10,000 teachers and supporters marched to the South Carolina Statehouse May 1.

"ReformED," directed by Peter Duffy, describes the real-life issues and struggles that teachers face because of lack of resources, planning time and overall flaws of the current education system.

Many of the actors in the play portray teachers and principals. First-year dance major Aubrey Houle plays a teacher named Melissa.

"Melissa's a teacher who is trying to go to her principal and just kind of get him to take more action about a situation that happened with a student, because she just wasn’t satisfied with the way that it was handled and just kind of felt like nothing was really done about it," Houle said. "So she’s trying to reiterate that there’s still a problem and that it wasn’t handled and just trying to advocate for herself.”

Duffy, who is interim associate chair for USC's Department of Theatre and Dance, said the idea for the play originated when he began to contemplate how he could ethically educate students on how to be teachers and the hardships that come with education.

"There's just so much tumult in the profession," Duffy said. "How do I prepare people to go in so they feel like they have their eyes open and they know what they're stepping into?"

Tayler Lenoir, third-year theatre major and an actor in "ReformED," plays a principal and actor four.

"For the principal, I’m accepting an award, I’m just explaining how hard it is for principals and teachers and the school system and how we always get seen as like the bad guy," Lenor said. "But we always try to be helpful for the students and all that."

Duffy had his students interview teachers so they were able to collect data and truly understand what life is like for teachers.

"It started as a class project, and then it got a really nice grant from the College of Arts and Sciences to support the research, so I was able to take students to New York City to work with the former theater company that I used to work for," Duffy said. "Then we just played with the data and tried to figure out how you get it on its feet in a way that it doesn’t sound like data but it feels more like a play."

Along with the support of students, teachers and faculty, Duffy was able to collect survey information from over 700 teachers across the U.S. to use in his play.

"Every example that’s used, every story of a child that’s used, I will as much as possible keep it to the truth of what they said," Duffy said.

There are moments in the play when all or most of the actors come out as an ensemble. They often speak lines together or speak out about similar ideas and issues.

"In those bits it’s a lot of storytelling with the rest of the ensemble. We’re sharing a lot of direct letters that students have written and a lot of direct dialogue from other teachers," Houle said.

Lenor said the ensembles serve different purposes, such as students who are writing thank you letters to their teachers and teachers who are discussing the difficulties that come with teaching.

Brendan Martyn, fourth-year theater major and actor, said the purpose of the ensembles is to show that these issues that occur with teachers happen all over, not just locally.

The South Carolina legislators are invited to "ReformED" on Nov. 13 in order to create dialogue between educators and legislators, Duffy said.

"There really isn’t a place for people to sit down and have an honest conversation," Duffy said. "I’m hoping legislators go so they can listen a little bit and experience more of what teachers are saying in a context that’s not a rally or a march, where it really is people getting to sit down and be reflective and thoughtful — an open conversation."

At the end of the play, Duffy allows time for the audience to discuss the play and the issues of education. Duffy said the audience talk-backs are intended to provide time for audience members to share their own thoughts and also for teachers to be empowered in knowing that there are other people in the audience who are listening to what they have to say.

"A play is not going to fix education," Duffy said. "The play is just going to hopefully make people talk."

"ReformED" will take place at 7 p.m. from Nov. 11 to 14. The play is free for everyone, but attendees are encouraged to sign up ahead of time through EventBrite.