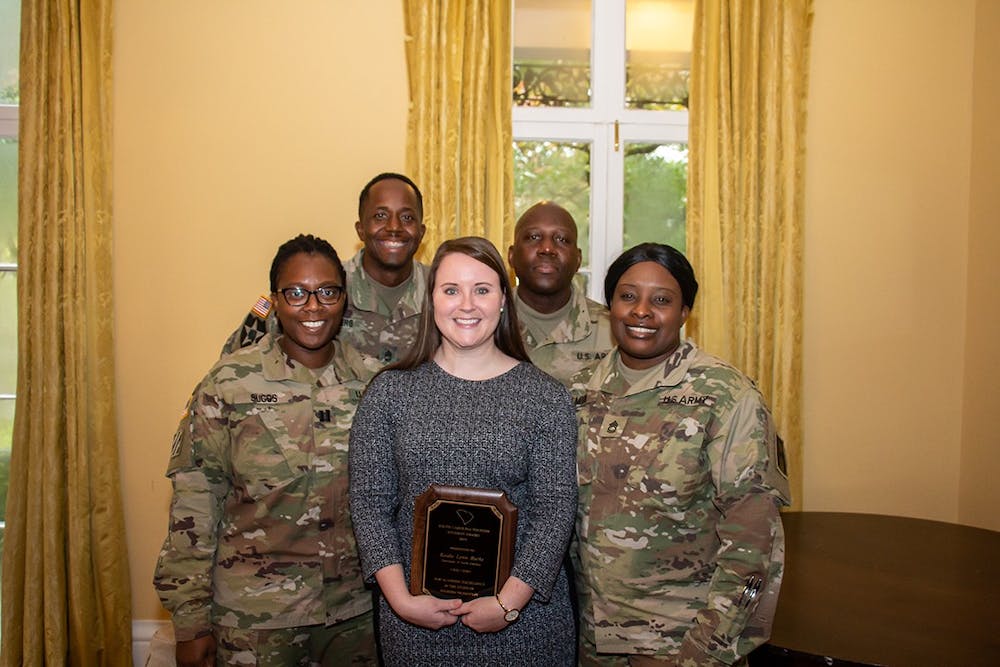 "I was very flattered and humbled for receiving a scholarship and an award that was solely based on recommendation from a professor and the support of my college," Burks said.

The fourth-year hospitality management student served for 10 years in the active military and is currently in the reserves. She and eight other students from eight colleges in South Carolina received this award and were recognized for their outstanding academic achievement in culinary, hospitality or tourism studies.

Burks said she didn't believe her military experience played a direct role in her being nominated, but it did help her be a "better student," which played a role in her candidacy.

"I tend to maybe work harder, 'cause I left a 10-year career, and I didn't leave it to just show up to class whenever," Burks said. "I learned in the military that it's all about networking and, you know, doing well and making sure people know who you are."

Burks said she believed her involvement in the classroom and her extracurricular activities were a big reason she got nominated.

"The more you interact with somebody, the more effort they can see that you put into assignments or tasks or whatever it is, the more willing, I feel like, they're going to want to help you," Burks said.

Marketa Kubickova, an assistant professor of hotel, restaurant and tourism management, said Burks' involvement in the classroom was a big reason she nominated her.

"She has always participated. She has always been very involved in the discussion. She showed her interest into the hospitality industry," Kubickova said. "As a teacher there are some students that really stand out because of their performance, their dedication, their involvement, their interest."

Burks is also the vice president for the Eta Sigma Delta, an honor society for tourism and hospitality students.

Robin DiPietro, School of Hotel, Restaurant and Tourism Management professor and faculty adviser for Eta Sigma Delta, said because Eta Sigma Delta was exclusive, it was a great way for Burks to set herself apart.

"We have about 650 or 700 students right now, and there's only about thirty active members of Eta Sigma Delta," DiPietro said. "She's probably, I would say, top 3% to 5% of our program."

Burks said winning this award was self-validating for her.

"I was terrified when I got off of active duty. That's something I've done for 10 years, since I was 17," Burks said. "Receiving this award just kind of reaffirms to me that I am doing the right thing. Like, I made the right decision; I'm on the right path; I'm doing what I'm supposed to be doing at this moment."

DiPietro said she wasn't surprised when she found out Burks was one of the winners.

"Because I know her, I wasn't surprised, but for people who didn't know her, I'm glad that it showed up on the paper," DiPietro said. "Hands down, she was the best candidate for meeting the criteria of this award."