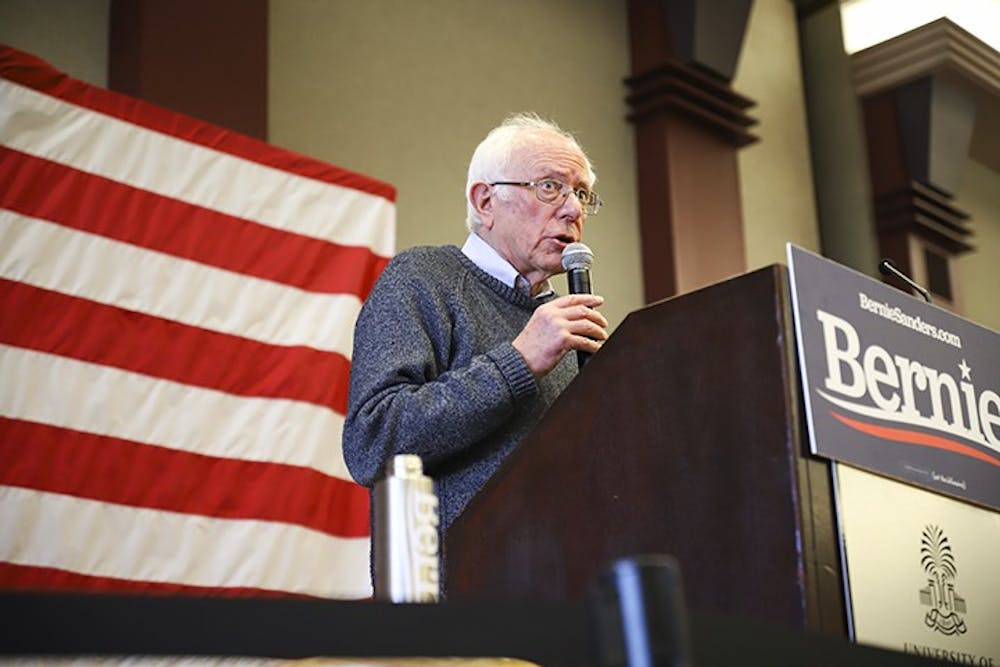 John Lennon’s “Power to the People” echoed through the Russell House Ballroom Sunday as hundreds of potential voters rushed to watch the 78-year-old senator speak.

Bernie Sanders, a frontrunner for the 2020 Democratic Presidential nomination, spoke today at an “eat and greet” event. The ballroom was filled to standing room only. Several speakers were lined up, including Rep. Cezar McKnight of South Carolina District 101 and Ohio Sen. Nina Turner.

Sanders opened by thanking all the support staff at the event, and the speakers who went before him. The event then moved into what can only be described as a “teacher-student” forum. The senator encouraged audience participation, asking people to raise their hands and tell him what issues mattered most. He then expanded on those issues and gave his thoughts, sometimes asking follow-up questions.

Several themes presented themselves as the event progressed such as environmental concerns, health care, and student debt.

“Anybody who tells you that climate change is a hoax, you tell them that they are turning their backs on their own kids,” Sanders said. “What we are going to do is to have the courage to take on the greed of the fossil fuel industry, and to tell them that their short-term profits are not more important than the future of this planet."

According to Sanders, the United States of America is the only major country on Earth that does not guarantee health care for its citizens. This has resulted in 87 million people today who are uninsured or underinsured.

He said that in his eyes, a civilized healthcare system allows anyone to go to any doctor, regardless of income.

Sanders said he planned to usher in a new healthcare system by expanding medicare over a four-year period to encompass all of America.

Beyond health care, Sanders’ token issue is arguably his stance on education.

His first plan was to make public colleges and universities tuition free. His second was to cancel all student debt in America.

“I don’t think that people should be punished," he said. "For the crime of getting a higher education."

In terms of higher education, Sanders emphasized his two plans were “not radical ideas.”

In response to the senator's ideas, Maria Calef, a supporter since his first campaign, said, “Bernie is the echo of my conscience.”

Calef, a University of South Carolina alumna, owes about $40,000 in student loans. One of her sons owes $30,000 while the other owes $10,000. Because of this, one of the main reasons she supports Sanders is for his view on free college.

Claire Ouzts, a first-year middle level education student and student senate member, has been a Sanders supporter since 2015 when she was assigned a project on him.

“My biggest reason for supporting Bernie is that of all the career politicians I’ve followed closely, he’s been the most consistent throughout his entire career,” Ouzts said.

But he had some criticism for Generation Z, too. He said the younger generations don’t vote in high enough numbers, and that if they voted as much as their older counterparts, “we could transform this country.”

Addressing the demographic, he said, “Your generation is the most progressive young generation in the history of this country. You should be proud of that.”

He ended his almost 45-minute speech with a call to action, asking the audience to get involved in the political process.

"Fifty years from now ... people will be looking back on this election," Sanders said. "Let us make sure we do the right thing.”