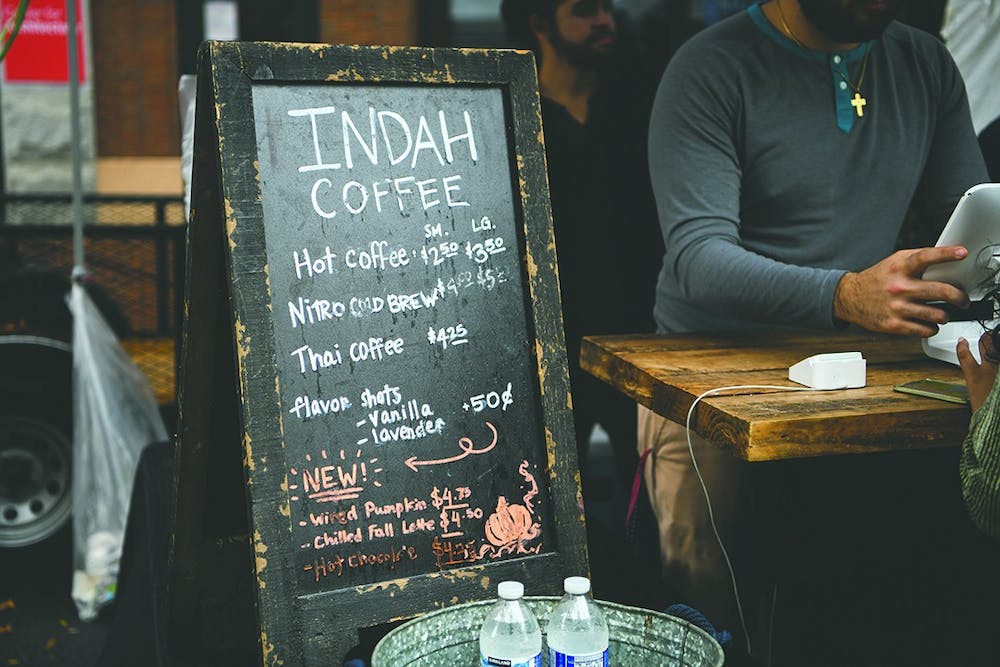 Nick Hauser, founder and owner of Indah Coffee, had always drank coffee, but while exploring Southeast Asia with his wife Stefani, his fondness of coffee began brewing into a passion.

However, during his travels, Hauser surprisingly found he was less than enthused by the selection of coffee.

“I started asking all the local restaurants and hawker stands and the guys, you know, 'Where can I find a real cup of coffee?' and everybody would hold up the Nescafe packet,” Hauser said. “I was really disappointed because everything is grown like a mile from where it is actually served.”

Everything except for coffee, of course. After constantly searching for a decent cup, one waiter at a restaurant mentioned his friend who works with coffee was coming to town and bringing some of the supply.

Hauser was immediately intrigued when he first saw the raw coffee, which is green. Before the Hausers knew it, they were flying to Sumatra with the man and touring different coffee farms to learn about the processes.

Hauser then had his first roasting lesson, which involved rolling coffee beans in a wok over an open fire, and was immediately hooked. As a result, he bought a few extra suitcases, packed them all with raw coffee and ordered a small home coffee roaster upon returning to the U.S.

“I’ve enjoyed coffee, but I never realized how beautiful it could be if it was properly done,” Hauser said.

Hauser started out trying different roasting methods for friends and family who eventually encouraged him to take his coffee to the All-Local Market on Whaley Street in 2010.

After that, Hauser opened a tent at Soda City. There, he realized the power behind coffee. More than just a beverage, he began to see coffee as a community builder, even growing a base of Saturday regulars who came for their coffee fix.

Eric Williams has been an Indah Coffee customer since “day one" and often spends up to two hours at least twice a week at the shop, working and enjoying the coffee.

Business at Indah’s tent grew over the years, and Hauser began roasting for other businesses and coffee shops in the area. The Hausers eventually turned their detached garage into a roasting facility licensed by the Department of Agriculture until business exceeded the vicinity’s capacity.

In 2017, a new Indah Coffee storefront opened on Sumter Street. Unlike any other coffee shop in Columbia, Indah has its cafe in the front and roastery in the back, complete with a cupping room, where customers can taste different coffees and learn about the roasting process. More recently, Indah Coffee expanded to a second storefront on Main Street.

One drink in particular has brought the cafe a lot of attention: the Thai coffee. The drink consists of a sweet house-made condensed coconut milk and either regular or cinnamon cold brew coffee, depending on the location. Employee Nathan Leonard said it is the most popular drink on the menu, especially in the summer.

Hauser created the drink after spending time in Thailand. Although the drink is served cold and was originally supposed to be seasonal, he admits there were a few revolts when they tried to discontinue the drink during the winter months.

Daniel Paul is a weekly customer at Indah Coffee’s tent at Soda City, and he credits his frequency to the fact that Indah is the only place with Thai coffee, noting it is definitely one of the highlights of Soda City.

“It’s just different than anything else that they have, and I feel like it's got a little bit more caffeine as well, a little more kick to it,” Paul said.

Hauser grew his business based on authenticity because he enjoyed the idea of creating a local coffee shop that offers a new perspective on the beverage.

"We are just delighted to be a part of the growing community and culture and the fabric of this great region, this great city,” Hauser said. “I'm excited to share beautiful coffee with as many people as we can.”