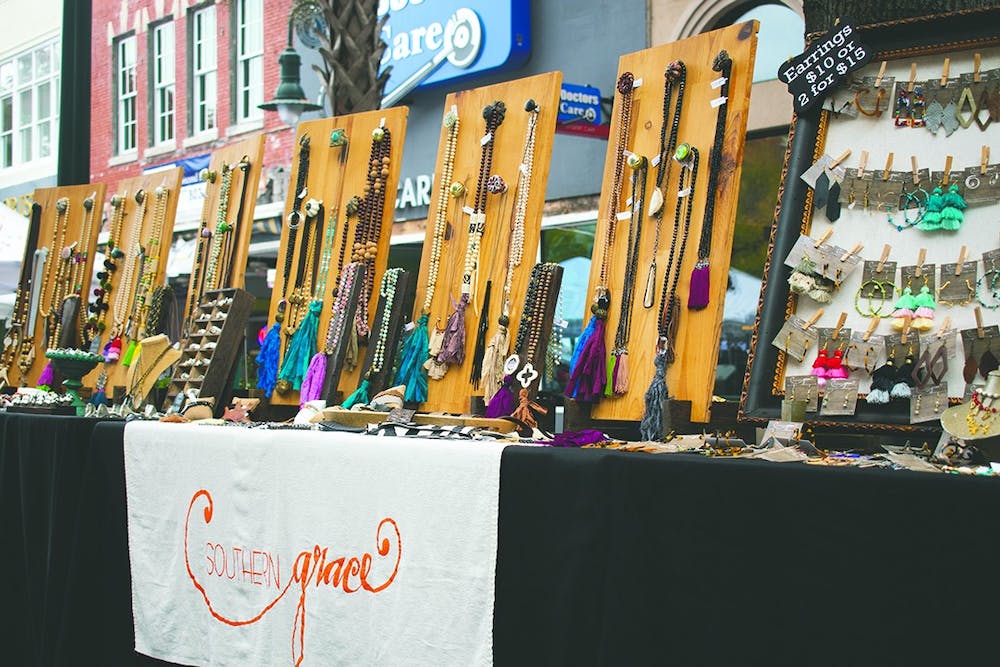 Though Soda City may be Columbia's local market, vendors travel from all across South Carolina to participate. Southern Grace, a Rock Hill-based jewelry business, is one such vendor, making trips once or twice a month to set up shop on Main Street.

Daphne Mahon, the owner of Southern Grace, said she wishes Rock Hill had something similar to Columbia's Soda City. Mahon has been in the retail business for 19 years. Before selling at Soda City, she owned a retail boutique in Rock Hill. After retiring, she decided she wanted to do something fun on the side, and handcrafted jewelry becoming her hobby of choice.

Aside from being an enjoyable pastime, a major reason Mahon said she founded Southern Grace was her two daughters, who both love jewelry. Her youngest daughter, Grace, is the inspiration behind the business' name.

Like many other Soda City vendors, Southern Grace’s jewelry is 100% handmade. Because of this personal touch, Mahon said she believes it is important customers buy from her.

“I think handmade and shopping local with artisans is a great idea,” Mahon said.

For those not into deer antler jewelry, other items on sale include leather bracelets, beaded chokers and hand-cut earrings. Southern Grace even sells Gamecock apparel for game day or just for showing off school spirit.

“I bought this rainbow choker. I love all the colors in it and I like the shape,” customer Kiley Culbertson said.

Culbertson said she believes the colors in the jewelry will go with almost anything and add to her outfit.

Mahon said she tries to make sure everybody from young teenagers to adults can find something they like.

“This is a great opportunity for not only students, but everybody that lives here to come out on Saturday,” Mahon said.

One of her personal favorite things about selling at Soda City is meeting so many people and their dogs. Among the many new faces that circulate through the market are some familiar faces, which Mahon especially enjoys.

“I love when people come back and shop again,” Mahon said.

Southern Grace can be found once or twice a month at Soda City. Mahon's booth has a new location every time she comes to sell.