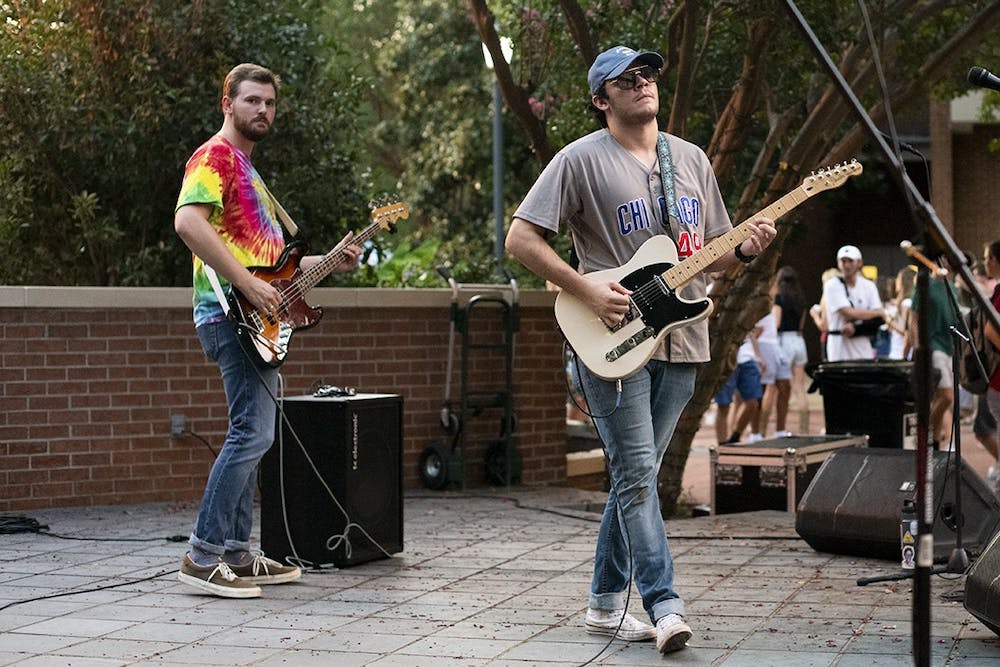 Ridge DeVuono is the lead singer and manager of Tripping on Bricks, a band founded by a group of USC students in 2016. Almost four years later, the band of mostly USC alumni released its first album, "Colorblind" on Nov. 22.

As the songwriter, DeVuono said “Colorblind” is a homage to his experience in college. It touches on subjects like dealing with losing someone special, mental health and not doing what one believes they are supposed to do.

“A lot of the stuff that I write could be upbeat and happy like melodically, but the lyrics I have been writing are relatively dark,” DeVuono said.

David Bowie, Nirvana, Kings of Leon and The Doors are on the list of artists Tripping on Bricks has pulled inspiration from. DeVuono credits the fact that each band member has such a wide range of musical tastes to what sets them apart as a band.

The idea of starting a band began during DeVuono’s second year of college when he won USC’s Got Talent by playing Darius Rucker’s “Wagon Wheel.” He caught the attention of student drummer Evan Harper, who approached him about possibly playing together.

DeVuono didn’t take Harper up on his offer until a year later, when he started playing casually with the original lead guitarist Jonathan Bruney, who asked if he knew of a drummer.

“[I] went over there and jammed with him a little bit,” DeVuono said. “We just like gelled immediately, and he said, 'Do you know a drummer?' and I said, 'Matter of fact, I just bumped into one.'"

From there, Harper mentioned that he knew a bassist Evan Tyler, and the band was formed.

Tripping on Bricks began playing covers at campus events, like Relay for Life, or sorority and fraternity events at local bars. DeVuono introduced his own music to the band which opened up new opportunities, like gigs at New Brookland Tavern.

After graduation, Bruney took a job in North Carolina, so Nick Auch, who was the sound technician at Breakers Live, became lead guitarist. He added a rhythmic style to the band, according to DeVuono.

When it came to recording their debut album, the band members enjoyed the studio environment, but producing and funding the project themselves was a difficult task.

Auch is the only member of the band who didn’t attend USC, and also the only one who went to school to study music, specifically sound engineering. The rest of the members were self-taught. Since they produced the album themselves, they had to learn the recording process which turned into a lot of question-asking and “learning things on the fly,” DeVuono said.

DeVuono graduated with a business degree and he said a lot of what he learned has been useful while managing the band, especially money management.

While recording “Colorblind,” DeVuono would often book gigs the day before they were supposed to go into the studio in order to pay for their time. They even took to GoFundMe once, which with the help of their fans allowed them to afford a whole extra day in the studio.

There were a lot of ups and downs while recording, but DeVuono said that once they handed him the master version of the CD it all came together for him.

“I was just overrun with emotion, I didn’t think that I would feel that way but it was like a weird like burden had been lifted off,” DeVuono said. “They handed me the CD and I was like, 'Wow on this disk is the last four years of my life, in writing.'”

Tripping on Bricks will debut the album live at its release party Dec. 6 at The White Mule, and at different locations around Columbia the following two days. The band's goal is to eventually take this album on the road and play it to as many people as it can.