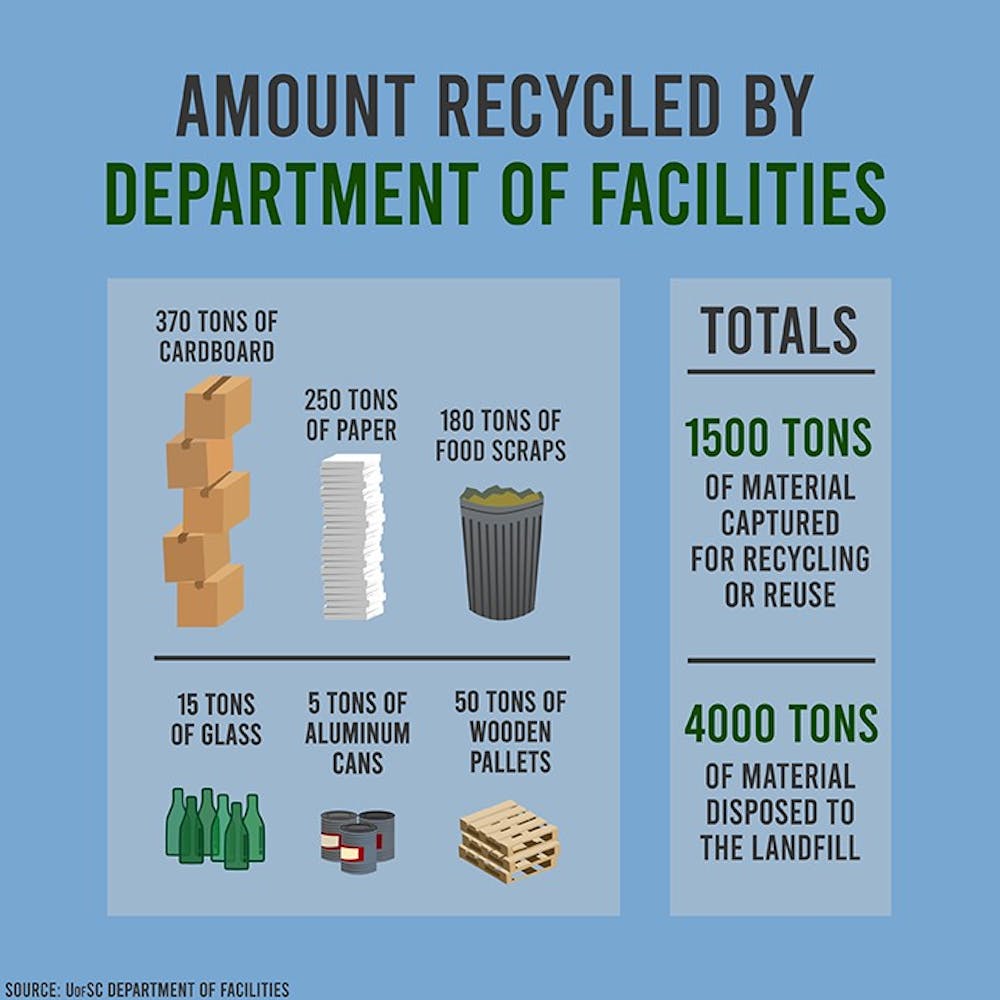 USC’s Office of Sustainability director Larry Cook spends much of his time going to meetings, reading up on sustainability and communicating with offices across campus. At the end of the day, he said he sometimes wonders if anything is actually being done because it is hard to measure his impact.

In 2018, the university sent about 4,000 tons of material to the landfill. That same year, USC came in 27th out of 31 schools in the GameDay Recycling Challenge’s diversion category, a nationwide initiative measuring the diversion rate of waste from landfills at home football games, losing to first place by a margin of about 71%. The university’s most recent Sustainability Tracking, Assessment and Rating System (STARS) report from 2016, which tracked campus sustainability efforts in a range of areas, placed USC at 15% in the food and dining category, below average for similar schools.

By these measurements, USC's sustainability has room for improvement.

Recycling comes last in the reduce, reuse, recycle order of importance, but Cook said it is the most tangible measurement for sustainability efforts and is the element the office has the most control over. The university’s recycling practices, then, can function as a lens to observe the success of its holistic sustainability efforts.

In The Daily Gamecock’s anonymous survey of 101 USC students and faculty members, 55.3% of respondents said they know the difference between recyclable and non-recyclable materials on campus, but 74.5% recycle plastic eco cups, 55.3% recycle plastic utensils and 58.1% recycle coffee cups, none of which are recyclable. However, 90.4% said they recycle while on campus, and 71.3% said they are willing to go out of their way to recycle.

The data suggest people are not only uneducated on recycling guidelines, but also want to recycle and believe they are recycling properly.

Melissa Shugart, a second-year chemistry and Spanish student and the community outreach manager for EcoReps, said a lack of proper recycling knowledge is one of the biggest issues facing campus sustainability. For example, people assume the eco plastic cups are recyclable.

“It kind of breaks my heart to see it,” Shugart said. “I’ll see the recycling bins, and it'll just look like landfill waste, and I’m like, ‘Well, there goes that.’”

The university’s facilities department has a crew of four employees who sort all of the university’s recycling by hand. When non-recyclable materials are tossed into recycling bins, Shugart said this contaminates the entire batch and makes the sorters’ jobs more difficult, sometimes causing otherwise recyclable items to get tossed.

Scott Warner, sustainability manager for Carolina Food Co., said he tries to combat misinformation through posters in campus dining halls. He said by telling stories through signage, he hopes students will understand the downstream effects for people processing waste.

Dameon Hopkins, the waste management and recycling manager for the facilities department, said physical paper is not enough to improve recycling and sustainability education. People are not likely to take the time to read through postings on physical paper.

“Social media is the mainstream,” Hopkins said. “The black and white paper is, just, ‘I’mma glance at it, whatever, that’s a container for me to put stuff in.’”

According to Emma Sylves-Berry, a second-year political and environmental science student and the secretary of environmental affairs in Student Government, campus sustainability organizations all come up with "great" initiatives, but "nobody concentrates their ideas." As a result, they are not always on the same page.

“Communication amongst sustainability organizations on campus could be much better,” Hannah Pribanic, a second-year political science and Spanish student and the EcoReps president, said in an email interview. “A lot of us have the same goals and intentions, but we do not work with one another.”

As indicated by the survey, plastic eco cups are a major source of confusion among USC students. The cups are industrially compostable, but there are no industrial composts on campus. Campus sustainability organizations had differing responses on the ideal disposal method for these non-recyclable items.

Ian Bain, the farmers market and sales coordinator for Sustainable Carolina’s garden team, said it is best to throw these items in the trash. Non-recyclable items should never be thrown into the recycling, the third-year chemistry and math student said.

Pribanic said she agreed. She said though the cups say they are compostable, they cannot be composted on campus and should be thrown away.

These cups can be collected on campus for proper composting, though. Warner and Sylves-Berry said the dish return on the second floor of Russell collects these cups and sends them to the proper facility for composting.

“A lot of our material says compostable, but we’re just throwing it out,” Sylves-Berry said. “It’s not compostable unless you compost it, otherwise it’s trash. It’s not enough just to buy the compostable material if you’re not actually going to be composting it.”

According to Cook, many barriers to increasing sustainability on campus are due to larger policies. Take, for example, the plastic cups in Russell House.

The cups have the widely recognized chasing arrow logo on their bottoms, but they aren’t recyclable. Cook said from a sustainability professional standpoint, this is a major cause of frustration.

“When they were first designing [the logo], it was never to indicate recyclability,” Cook said.

Cook said the problem lies in the resin identification number, or the number in the middle of the logo. Recycling managers typically want plastics with “1” and “2” resin identification codes, which signify products that are made of polyethylene terephthalate (PET) and high-density polyethylene (HDPE), respectively. Carolina Food Co.’s cups have a “7” etched into them, which is not accepted by managers.

“Seven is like the Wild West category, because it is just ‘other,’” Cook said.

According to Warner, it is cheaper to produce new plastic than recycle used plastic, so many oil-based plastic cups won’t be recycled by waste companies. Such is the case in South Carolina, which has no buyers for recyclable plastic. Warner said the most sustainable option, then, is to purchase bio-based plastics that can at least be composted.

Another issue is how quickly recycling policies can change. Shugart said certain items may be accepted one month but not the next, making it difficult for students to educate themselves and stay on top of what can and cannot be recycled.

Additionally, Warner said national brands – such as Panera and Chick-fil-A – operating within Russell House abide by their own service models and are not subject to any modifications that might increase sustainability here on campus.

Since coming to campus in 2017, Warner has installed a computer system called "LeadPath" to track and analyze food waste patterns in busy kitchens and reduce waste. USC’s STARS food and dining rating is expected to double this year, putting it above average for similar schools.

Despite the losses to landfills, Hopkins said the facilities department captured more than 1,500 tons of recycling for reuse last year. Without the department’s hand sorting, Bain said most of this would likely have ended up in the landfill.

Students can opt for the dine-in option at Tavolino’s, Southern Kitchen, Congaree River Smokehouse and Spice and ask for dishes rather than the default to-go single-use containers. At Starbucks, people can bring their own reusable containers for discounted prices on coffee and other drinks.

Above all, Shugart said it is important for each student to realize the impact they can have on sustainability practices just by making simple lifestyle changes, and that "recycling isn’t the end-all, be-all of sustainability because it still uses resources."

“If you swap your water bottle and a plastic bag for a reusable [bottle] and a reusable bag, over 50 years, one plastic bottle, one plastic bag a day that’s over 500 pounds of plastic that you, yourself, can prevent from producing, from ending up in landfills," Shugart said. "That’s what one person can do, making one change, once a day."

Shugart said increasing sustainability literacy could be as simple as requiring incoming freshmen to receive this type of information at orientation or in U101, a sentiment echoed by Sylves-Berry and Bain. The Office of New Student Orientation did not respond to three requests for comment.

For Cook, the solution to creating a more sustainable USC lies in education and continued awareness of what students can do to help his office, the campus and the larger community.

“Expanding on the three 'R's – reduce, reuse, recycle – I would really like to hit home the idea of when you are recycling, to know what’s really accepted,” Cook said.

Sylves-Berry said the status of the upcoming new student union is still relatively up in the air. Should students show interest, the student union could be built to Leadership in Energy and Environmental Design certification standards, meaning sustainability would be at the forefront of its construction. Unless administration hears students are interested and passionate in sustainability efforts, she said, nothing will change.

“Students being aware that money has to go places, and so, where do you want your money to go?” Sylves-Berry said. “Students just have to get vocal about this.”

Maddox McKibben-Greene contributed to the reporting of this story.