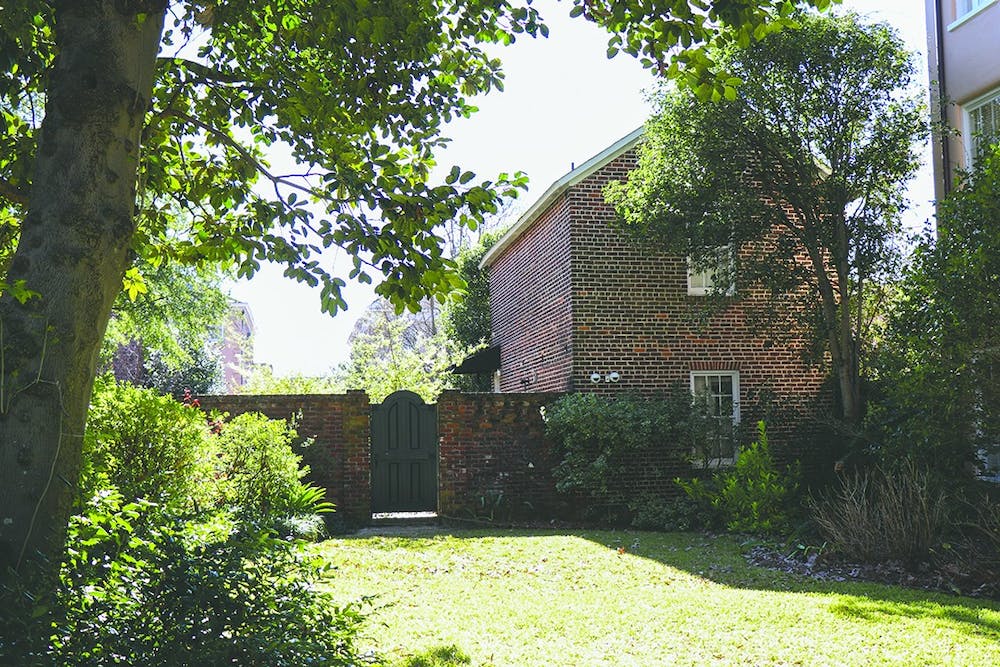 The original chemistry textbooks used by University of South Carolina students in the early 1800s are remarkably similar to the books modern CHEM 101 students purchase today.

The books are worn from their two centuries of existence and bound with cloth or leather instead of laminate, but they hold much of the same information today’s students learn. The periodic table wouldn’t be assembled for another few decades, but these students, all white men, went to classes in the same Horseshoe buildings students do today.

Only their chemistry books were dusted by slaves.

Almost every book in the original collection of the South Caroliniana Library was once cared for by enslaved labor. Enslaved persons built, maintained and staffed the university from its founding in 1801 until the Emancipation Proclamation freed Confederate slaves in 1863.

“[The Horseshoe is] essentially the best preserved landscape of slavery on any American college or university campus,” said Bob Weyeneth, a history professor at USC.

In 2010 Weyeneth led a senior seminar that dove into the history of slavery at South Carolina College, the school’s original name. During the 2019 fall semester, the university’s newly appointed president formed a commission to do even more.

“I’ve wondered over the years why nobody was really looking at the connections between slavery and the university, which was founded, obviously, 60 years before the Civil War even started,” Weyeneth said.

During the project, Weyeneth and his students discovered the names of 21 people enslaved at the university. Unlike at the University of Virginia and many other Southern colleges, here there were only a handful of records that mentioned enslaved people, and even fewer documents named them. The documents could have been lost, damaged, destroyed or might not have existed in the first place.

A separate project erected a statue of Professor Greener, the school’s first African American professor, who taught at the university briefly during Reconstruction when the college was desegregated for the first time. That statue stands outside Thomas Cooper Library.

For many students, these were the only reminders of the university's slavery past.

Captain university ambassador Will Stallings said the organization doesn’t bring up slavery on campus tours, but all ambassadors are prepared to answer questions about that history if asked.

“We don’t want to make certain people feel uncomfortable, and we don't necessarily think that it contributes to the overall message that we are trying to bring,” Stallings said.

He also said the university administration recently asked for the group to consider mentioning the history of enslaved people on tours, but the group has not made any changes at this time.

“History is a tapestry, and it’s not a full picture if you don’t get all of the threads in there, and that includes the ones you don’t want to have to deal with,” West said.

West worked with Weyneth and his students to reveal the history of enslaved people on campus. They discovered many owners of these slaves are revered figures on campus, such as John Rutledge, John and Joseph LeConte and Thomas Cooper.

“Thomas Cooper was a skunk,” Weyenth said. “Why is this stuff still here? It makes no sense.”

At least 12 buildings on campus are named after known slave owners. Due to the Heritage Act of 2000, the university as a state agency cannot change these names without a joint act of the South Carolina General Assembly.

The bill states: “[The South Carolina Heritage act of 2000] prohibits the removal of these Confederate flags on the State House grounds and the removal, changing, or renaming of any local or state monument, marker, memorial, school, or street erected or named in honor of the confederacy.”

The advocacy of enslaved persons and their history on this campus is an important issue to former university president Harris Pastides and has carried over to current president Bob Caslen. During the 2019 fall semester, Caslen staffed a presidential commission to look into the university's history, “warts and all,” Weyenth explained.

Weyeneth, West and the former and current university president will work with others on the committee, including USC’s chief diversity officer and the principal of Maxcy College.

The commission has not met yet, but the goal of the group is to learn more about the university's past and educate the community about their findings. Along with slavery, the commission will look into the history of women, civil rights, veterans and other groups on campus.

While changing building names is an unlikely outcome, West explained that the commission could add a “more prominent and holistic look at the entire campus” and add context to the names so visitors can understand the full story of USC.

Some ideas include an app with a self-guided tour, in-depth markers at the entrances of buildings and adding material to U101 classes.

“We may not be able to change the name of the Cooper library, but we could put a plaque there that said ‘Thomas Cooper is a skunk,” Weyenth said.