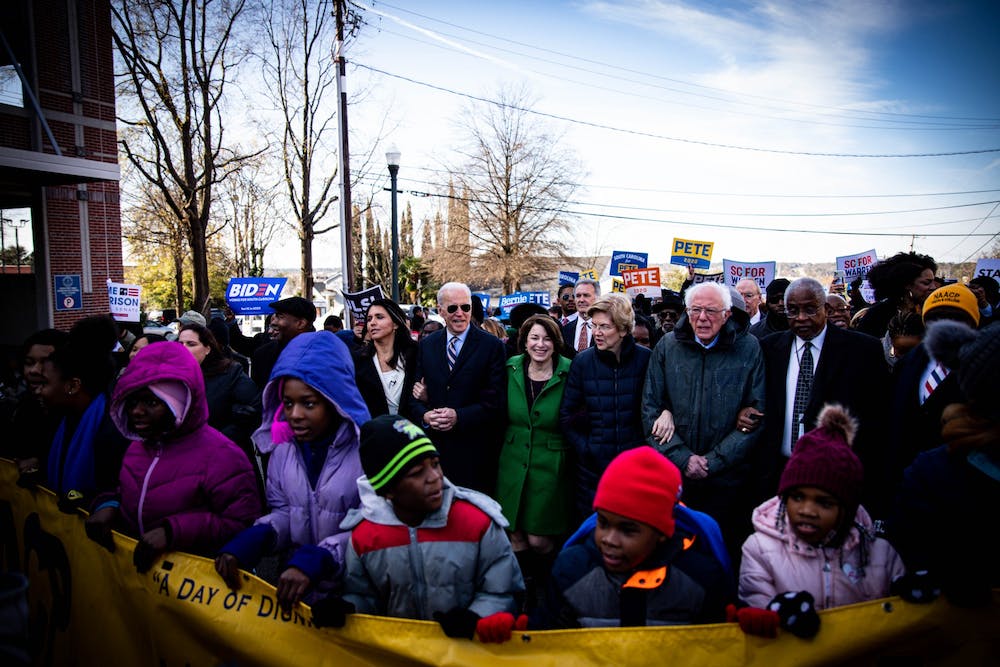 Presidential candidates speak at King Day at the Dome

By Christine Bartruff, and Kailey Cota

Clusters of political supporters, presidential candidates and Columbia leaders marched down Main Street with Martin Luther King Jr.’s “I Have a Dream” speech playing in the background during King Day at the Dome.

“He fought for our rights and without him, we don’t know where we, as African Americans, would be at to this day,” Nelson-Strong said.

The candidates who spoke at the rally were Sen. Bernie Sanders, former Vice President Joe Biden, Tom Steyer, Sen. Elizabeth Warren, Rep. Tulsi Gabbard, Sen. Amy Klobuchar and former Massachusetts Gov. Deval Patrick. Many of the candidates stressed the importance of voting in the upcoming South Carolina primary on Feb. 29. The deadline to register to vote is Jan. 30 and the deadline to request an absentee ballot is Feb. 25.

Senator Sanders was the first candidate to speak.

“If we do not allow Trump and his friends to divide us up by the color of our skin, or where we were born, or our sexual orientation or our religion. If we stand together, there is nothing that we cannot accomplish in the fight for economic justice, racial justice, social justice, [or] environmental justice,” Sanders said.

During Biden’s speech, he emphasized action.

“We have a tremendous opportunity to take the next great step forward in racial justice, criminal justice, domestic justice [and] environmental justice. Folks, we have a chance to rip out the systemic roots of racism in this country,” Biden said.

Sen. Warren said: “America is ready to go forward, to write the next chapter of our history – That America is within our reach. I’m running for president because I believe the only way we can reach that America is to stay in this fight, side by side. Make each other’s fights our own.”

Mayor Pete Buttigieg of South Bend, Indiana, participated in the march but did not speak at the rally.

“It's just important to me that we have someone who not only supports the government contractors, but the people who are actually on the fields or at sea,” Scott-Bailey said.

Miriam Tisdale, a third-year psychology student at Columbia College, said she appreciated the presidential candidates coming out to the Statehouse.

“It’s very heartening to know that it’s not all just rhetoric, and not all just talk. People are actually going to try to make a difference in our life,” Tisdale said.

William Matchin, an assistant professor at USC’s School of Public Health, attended the rally with Our Revolution South Carolina, an organization which, according to Matchin, works to draw “new people into the political process that haven’t been involved before.”

Other organizations present included the League of Women Voters, the census and the event's sponsor, the NAACP.

Former Gov. Patrick said: “It’s time for us to use the power we have. We can’t go from hope and change to fear and settle for that, not in a nation with a conscience. Dr. King and his allies didn’t fight and die for the right to vote for us to sit idly by and wait for someone else to save us. No one's coming to save us, but us.”

Chloe Barlow and Jack Bingham contributed to the reporting of this article.