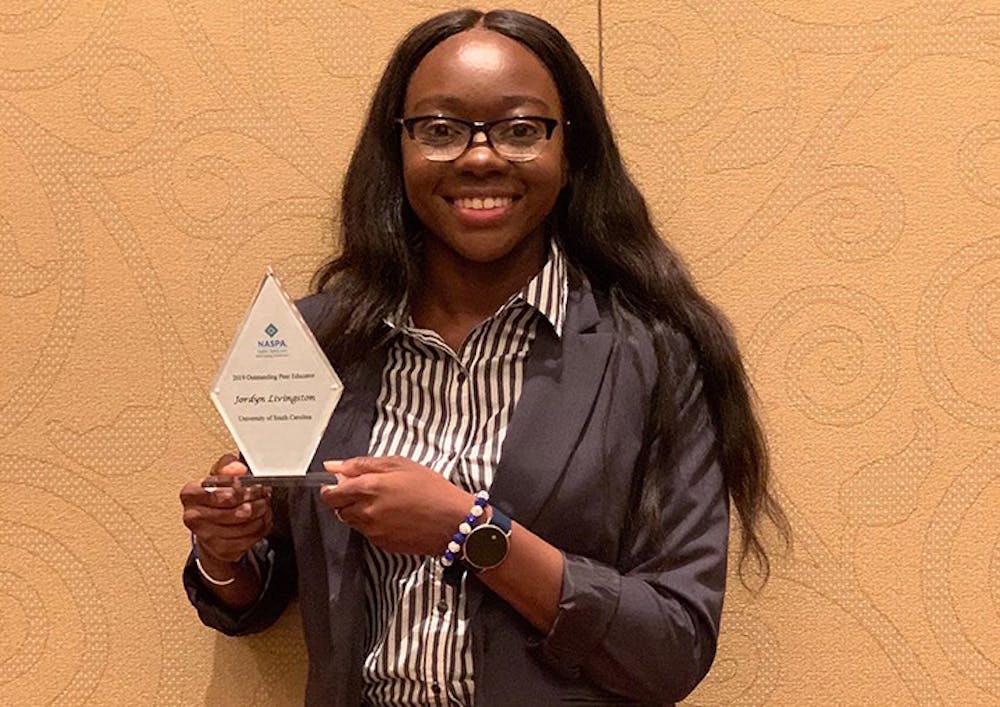 This past November, the National Association of Student Personnel Administrators (NASPA) held its yearly General Assembly conference. This convention celebrates student-driven advancements in institutions of higher education regarding wellness, prevention and advocacy.

Third-year public health student Jordyn Livingston received recognition for her dedication and work in the Changing Carolina Peer Leaders (CCPL) program. Livingston was chosen by NASPA out of a competitive nominee pool.

“She leads by example,” Crowley said. “Like any good leader, stands in the back and keeps the team on pace.”

CCPL’s body project chairwoman and fourth-year student Zeline Matthews said the award came as no surprise to her.

“We weren’t really surprised when she won at all," Matthews said. "It was like, ‘Of course, Jordyn won. It’s Jordyn.' So yeah, that’s just who she is."

Run through Student Health Services, CCPL holds events across campus, promoting education on a variety of general wellness topics. These topics range from healthy relationships and interpersonal violence prevention to mental health and stress management. The organization has a campus-wide presence and collaborates with other student organizations and university projects.

Livingston joined CCPL during her first year at Carolina and was serving as its sexual health chair when it received the Most Outstanding Peer Group award at the same NASPA conference in 2018 because of its work in flu campaigns and sexual health initiatives.

“I have lots of older siblings, and, who dealt with the consequences of poor sexual health, so having children at a young age, as well as friends who contracted STIs and STDs, and being from the South and being located in the Bible Belt, I just saw a lot wasn’t done,” Livingston said.

Livingston said inadequate sexual education in middle and high school prompted her to educate others on their sexual health.

“I really want to do work on educating on sexual health and kinda creating programs around that," Livingston said. "Being able to do that here in that peer program is really cool, 'cause it gives me that hands-on experience of what I’ll be doing in the real world.”

Now the president of the organization, Livingston heads the nationally recognized group of students who are often benchmarked by other universities’ peer educator programs because of its achievements.

Livingston said she and another CCPL colleague had the opportunity to present at November’s NASPA conference and share their information on personal health with other schools.

“It was cool to be able to take all of what I’ve learned from there and to show other schools," Livingston said. "A lot of people look to us and our program about how to educate for sexual health, 'cause a lot of schools are behind and don’t have the free range we have here."

With tabling on Greene Street, inclusion of new topics and the production of more events, Livingston consistently works with the team’s advisers to expand its presence on campus and within the student body.

An upcoming event, the “Get Yourself Tested” campaign, will take place this April. Held annually, Livingston said CCPL is working to revamp this year’s project to increase participation and awareness of Student Health Services.

“We do free testing on campus, so it’s free HIV testing, as well as chlamydia, gonorrhea and things like that, since testing on campus does cost money,” Livingston said. “We were at farmer's markets almost every week doing lots of games and activities; kind of teaching people about anatomy versus random trivia facts.”

“Getting people educated about sexual health, getting people more comfortable to come into the office and to get free supplies is and just getting us out there. Getting that we exist out there is my biggest accomplishment," Livingston said.

Following her award, Livingston said she will continue to promote positive change and dedicate her college career to student health education. She travels to Denver next week to participate in the NASPA peer educator project program. There, she will work on combining student leadership and a topic of her choosing to start another initiative on the Carolina campus.