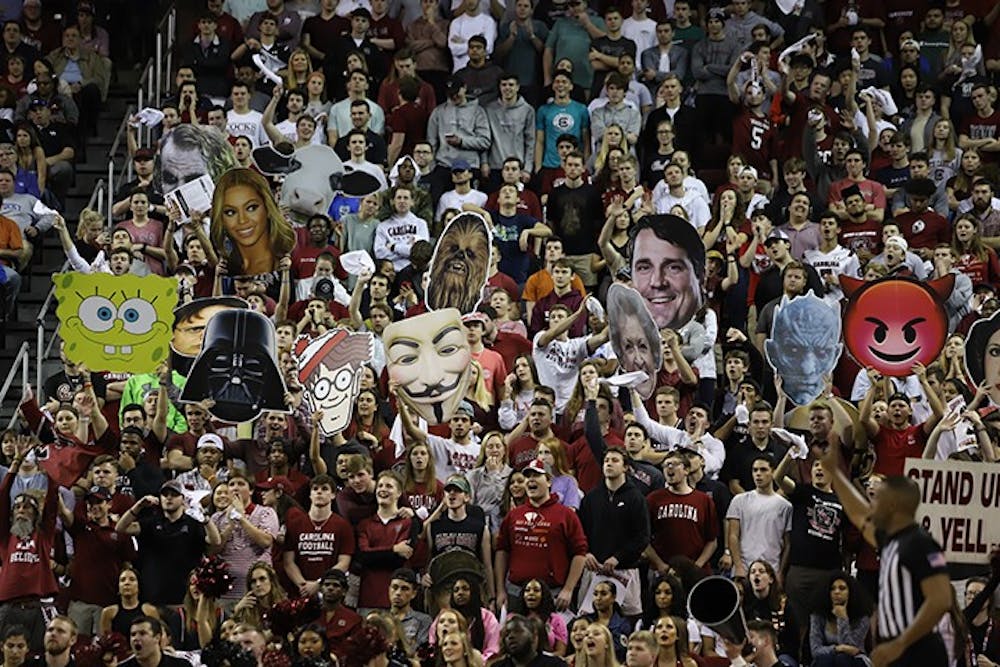 Ranked No.1 in the country, the South Carolina women's basketball team is known for its fanbase, and yet the student section in Colonial Life is expanded for the unranked men's games and not the women's.

This is why the layout of the student section needs to change.

The student section in Colonial Life Arena has been a topic of discussion recently among students at the university, as many students aren't fans of how it is laid out. There are different layouts for the student section depending on whether you are attending a women’s or men’s basketball game.

More room is accommodated for the men’s games than women’s games. During men’s games, students sit in section 110 behind the basketball goal, sections 111 and 112 behind the band, sections 216 to 218 in the rafters and a small section in the lower bowl behind press row.

The main argument that has arisen with the layout of the student section is that it isn’t uniform. For example, Dawn Staley and the women’s basketball team have led the nation in attendance for the past several years, so why is the women's student section not as big as the men’s student section?

It comes down to the fact that, it seems, more students are willing to come out for a men’s game despite the women’s team having more success over the last decade.

For example, Frank Martin and the men’s team were 9-7 coming into their home game against No. 1 Kentucky. This being a major opportunity for the Gamecocks to secure a big SEC win and an even bigger upset, over 4,000 student tickets were requested for the game. This caused the ticketing office to expand the overflow of the student section to sections 210 to 215 and sections 219 to 220 in the upper deck while not allowing students take both sections behind the goal, holding them to just section 110.

The same happened with the most recent home game for the women’s team versus ranked Mississippi State. This game had about the same weight as the Kentucky game for the men, but the student section was not expanded ahead of time. This might have had to do with the fact fewer tickets were requested, but over 2,000 students showed up to the game. Students were filed up to the second deck once capacity in the three sections in the lower level was reached.

So, what’s the solution to this? Obviously, it’s much easier said than done because when you move the student section around, you also have to move season ticket holders.

One way to make it uniform is by allowing the students to occupy both sections behind the basketball goal, sections 109 and 110. This would cause some ticket holders to move, but they could be moved to the area in the lower bowl behind press row, where students are allowed to sit during men’s games. Along with using both these sections for the student section, one could also use the current sections in the second level, 216 to 218, and sections 214 and 215.

Some famous student sections that should be considered as a model for the new and improved student section are those of the University of Duke, Pittsburgh and Wisconsin.

Duke’s “Cameron Crazies” take up a whole sideline in Cameron Indoor Stadium, making it feel like they are practically on the court with the opposing team. Pitt's “Oakland Zoo” totally engulfs the opposing team, the students taking up seats in the lower bowl wrapped around on three sides of the arena. Wisconsin’s student section takes up all the sections behind one goal and extends to the roof of the arena.