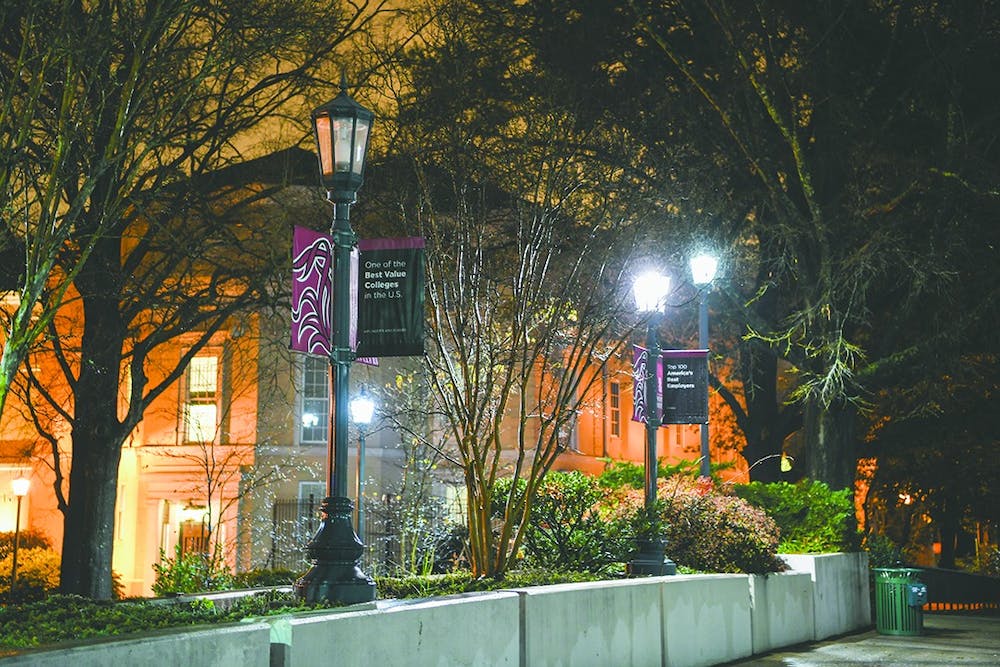 At the beginning of the spring semester, Maddie Love was walking home from her evening lab when she realized there was no light along her path between LeConte and Davis College.

Love, a first-year pharmacy student, said she was scared.

"Even when I'm walking in well-lit areas at night, I always feel like I need to be talking to someone on the phone, if anything were to happen to me," Love said. "It's definitely more scary when it's dark. Like, you just kind of feel scared."

"If you're a woman walking home at night, there's basically no light. You go past the train tracks, and there's all these people that are walking," Hinkle said. "It's just very scary."

Davis said she cuts through the parking lot across from 650 Lincoln apartment complex as a shortcut at night.

"It's already dangerous walking by yourself anyway, and then there's no light, so then, yeah, it got really bad," Davis said. "I actually did start crying for a second, and then I kind of gathered myself together and just hurried up and got home."

University of South Carolina Police Department captain Eric Grabski said student safety is a top priority at USC. USCPD does safety and lighting surveys on campus if students feel an area of campus is unsafe.

"Our primary concern is the safety of our students; not only their physical safety, but that they feel safe on campus. Not just students, but everybody that's on campus," Grabski said.

First-year retail student Greer Shanley said she thinks the lack of lighting also poses a potential safety hazard because people are unable to see the ground.

"The bricks, people trip on these during the day, so I feel like someone could get really hurt," Shanley said.

After hearing complaints,Residence Hall Association president Brandon Lynch, said he looked at some of the areas students thought were problematic.

According to Grabski, the number of people who report an issue with lighting in an area has no bearing on whether USCPD will investigate the area.

"It doesn't have to be a bunch of people," Grabski said. "We're very concerned about what our students think, and if it's just, like I said, just one, we're going to look into it."

Grabski recommends the Rave Guardian Safety app for those who feel unsafe. The app includes a text feature that connects directly to USCPD.

Students can also contact the department at 803-777-4215, email USCPD staff members using the department's staff directory located on their website or go to the department headquarters and make a report in person if they want USCPD to investigate an area for safety purposes.